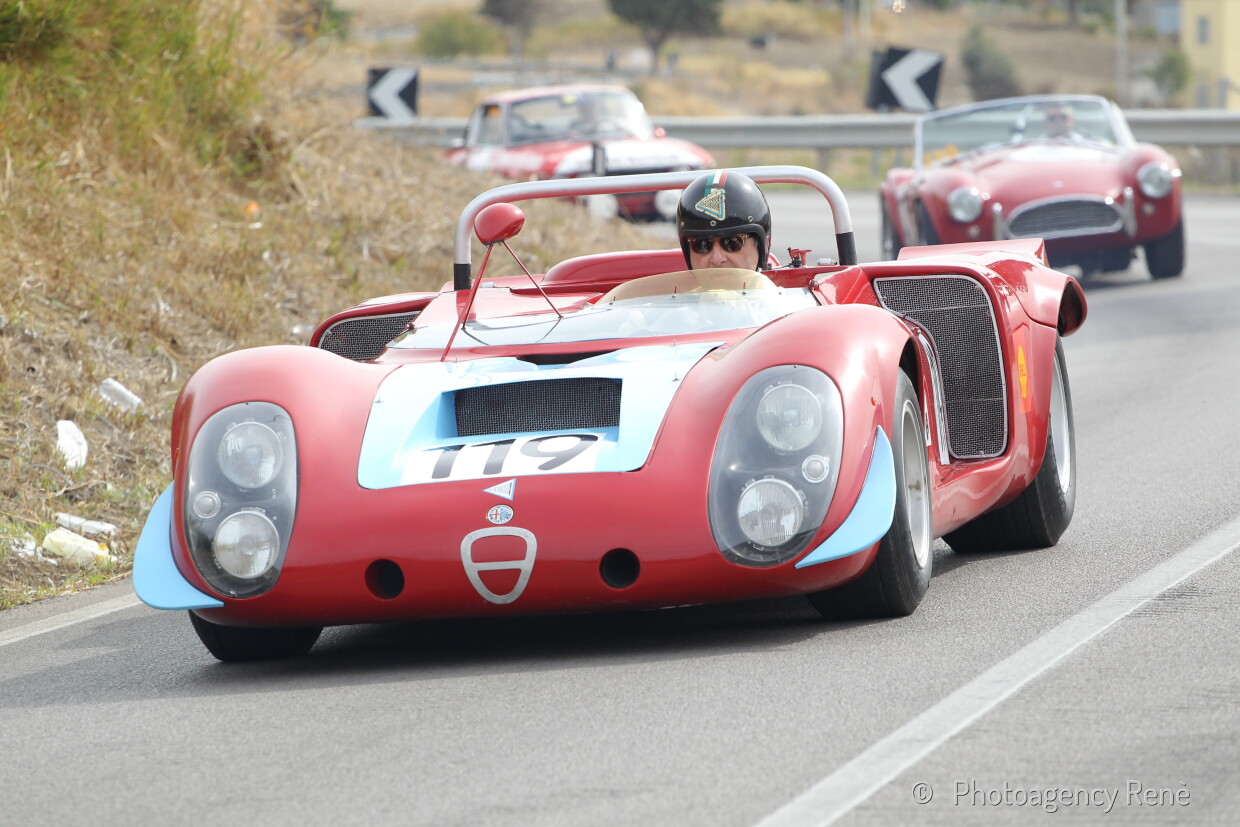 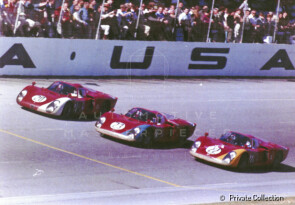 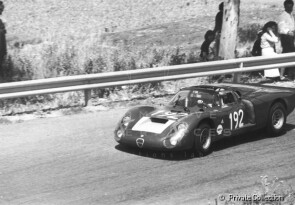 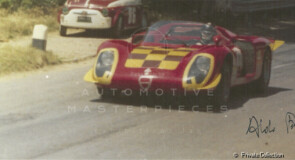 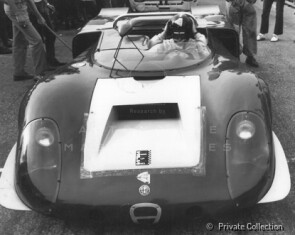 Share on
Owner Private collection
Originally bodied as a classic Daytona coupé for the Autodelta works team, chassis '014' placing 7th at the eponymous Florida race and 3rd at the Targa Florio.

The Tipo 33 is a racing car produced by Alfa Romeo from 1967 to 1977 to participate mainly in the world sport prototype championship and then also in the CanAm championship and hillclimbing. In 1967, the Alfa Romeo 33 Stradale, the version approved for road circulation, was derived from the racing model. The Tipo 33 and its derivatives prevailed in two editions of the sports prototype world championship, 1975 and 1977, in 1977 even winning all the races on the calendar. The Portello company had decided to suspend its participation in motor racing in 1951, retiring as the winner of the Formula 1 championship won with the 159. To restart its sporting activity, however, it did not choose the categories of open-wheel competitions but decided to approach to those intended for covered wheels which at that time enjoyed great success with the public with the world championship sports prototypes and partly also with the hillclimb competitions whose maximum point was the European mountain championship. To do this, however, a specially developed car is required, a Sport Prototype, different from the TZ. By the will of the then president of Alfa Romeo Giuseppe Luraghi, the 105.33 project started in the autumn of 1964, where 105 is the project code of the Alfa Romeo Giulia and derivatives and 33 is the number chosen personally by the president to better distinguish the new prototypes. Thus, in the spring of 1965 the first example of the Tipo 33, designed in Alfa Romeo, arrives at Autodelta, still in the Udine headquarters. Five other versions of the car were later produced, 33/2, 33/3, T33/4, 33TT12, and 33SC12. In addition to the main versions, a model with a long tail called the Mugello Spider was also created of the periscope model.

In 1968 the Alfa Romeo Racing Department designed and built the evolution of the car (Alfa Romeo 33/2) which was bodied by Franco Scaglione. At the 24 Hours of Daytona, in the race dominated by the 2.2-liter Porsche 907s, they took first place in their class, ahead of two other sister cars. The arrival of the three cars in the parade, following the example of the Ferrari 330 P the previous year, meant that the "33" was recognized from that moment also with the nickname of "Daytona".

Fitted with a Berlinetta “Daytona” body, this example was a factory entry in the 1968 24 Hours of Daytona, 1968 and 1969 Targa Florio races. Since Alfa moved to the 3-liter class in 1969, the car was sold to Aldo Bardelli, who raced it extensively in Italian hill climbs from 1969 to 1971 and had it modified to Spider form by Autodelta. Later the car was part of the Peter Kaus’ Museo Rosso Bianco in Germany.