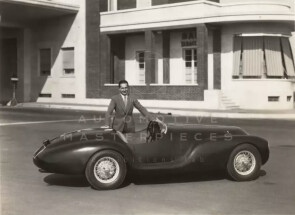 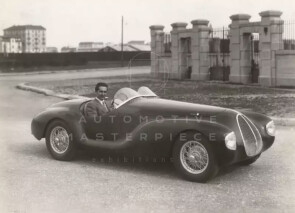 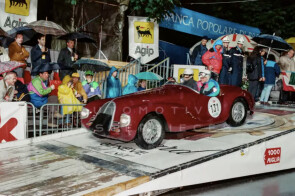 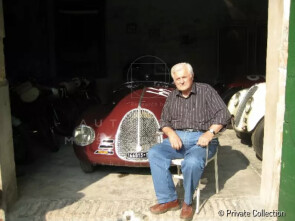 The Auto Avio Costruzioni 815 was the first car to be fully designed and built by Enzo Ferrari to side step an agreement reached with Alfa Romeo in 1939. Scuderia Ferrari built the car in a very short space of time. The 815 was developed by ex-Alfa Romeo engineers Alberto Massimino and Vittorio Bellentani and by Enrico Nardi in 1940 and built in just two examples, in the long tail and short tail versions. It could not be marketed under the Ferrari brand, due to a contractual clause with Alfa Romeo which required not to affix this name for a period of 4 years until 1943. Only two cars were built, the first for Lotario Rangoni Machiavelli and the second for Alberto Ascari. The Carrozzeria Touring body shop in Milan created the soft and sleek lines of the two “barchetta” two-seaters which, on 28 April 1940, started at the 1st “Gran Premio delle Mille Miglia” in Brescia (13th edition of the Mille Miglia) with two crews made up of Rangoni-Nardi and Ascari-Minozzi at ​​the wheel, with the latter who dominated the sport category up to 1500 cc      cc but had to retire due to an engine failure. Rangoni instead withdrew due to the breakdown of the transmission. Interesting was the decision to admit the two 815s, as they were not production models, but rather experimental cars. The designation "815" was based on the car's eight-cylinder, 1.5 L engine, obtained by coupling two four-cylinder, 1.1 L engines of the 508 C and was equipped with a four-speed gearbox. The chassis was constructed of large frame and cross members. Postwar, of the only two specimens built, the model owned by the Marquis Lotario Rangoni Machiavelli was destroyed. In fact, the brother of the latter, Rolando Rangoni Machiavelli, declared that he had sent what was left of the car to a wrecker, but there is no documentation of this. It seems that the car was found at a junkyard in 1958 by Domenico Gentili, who received confirmation from Enzo Ferrari himself that the sports car he had noticed was the crashed 815. Unfortunately, he did not have time to recover it.

1940 Auto Avio Costruzioni 815, with chassis 815/021 is the Ascari's car that made its debut on 28 April 1940 in the Mille Miglia. The car was sold to Enrico Beltrachini who raced it, participating in some races at the end of the Second World War without obtaining particular results, as at the 1947 (DNF) and 1948 (DNA) Mille Miglia. At the same time the newborn Ferrari had developed what can be considered its heir, as well as the first car of the new car manufacturer, the Ferrari 125 S. This 815 is the only one remaining, the "short tail" model and is kept in the famous and huge private collection of Mario Righini, in Panzano in Castelfranco Emilia.