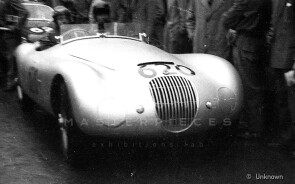 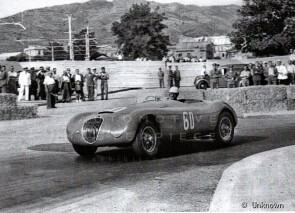 Share on
Owner Private collection
Always shrouded in "mystery", Clemente Biondetti's Works Jaguar-engined special has always been a car which has attracted the curiosity of historians and motoring enthusiasts alike. Created on a bespoke chassis with a factory-prepared XK120 engine, it competed in 1952 and 1953 before being rediscovered and restored in the 2000 by an Italian collector.

In 1950, the somehow "new" Jaguar brand was looking to expand its racing activities, in order to promote the new XK120 sports car. Under the direction of Lofty England, the manager of the racing division, Jaguar prepared 6 works XK120 cars to be used in competition in Europe during the 1950 season. Trying to compete in long-distance endurance, Jaguar was on the lookout for competitive drivers in this specific discipline. At that time, Clemente Biondetti was the top-ranking driver and his skills could have benefited Jaguar as a new team in this highly competitive field. By 1950, Biondetti's 1938 Mille Miglia record was still unbeaten and he had won the 1947, 1948 and 1949 editions of the race, not to mention his successes at the Targa Florio. As one of the most prominent endurance drivers and thanks to his impressive results, he was the ideal candidate for the Jaguar works team. Thanks to the work of the gentleman driver Tommy Wisdom, who connected Jaguar founder William Lyons with Biondetti during the 1950 Geneva motorshow, a deal was signed where it had been established that Jaguar would allocate a works XK120 and deliver it in time for the Targa Florio. During the race, the car assigned to Biondetti, bearing chassis 660043 and engine number W1147-9 (the same engine that will be installed on the special), suffered a connecting rod failure, that led to a withdrawn. Being three weeks away from the Mille Miglia, the works XK120 remained in Italy at Biondetti's garage in order to be prepared for the race, where the car ranked 8thoverall. During this time, Biondetti expressed interest in building a Jaguar special to compete in more races during the season and he obtained permission from the factory to use the damaged engine for his own purposes. Remarkably, this accident was the first recorded in Jaguar history that imposed a change in series production: from that moment on, all Jaguar pistons were crack-tested before being installed in any engine.

Using the spare parts from the broken engine of the XK120, which Biondetti upgraded with new Mondial pistons and high-lift camshafts, he begun building a first special around a bespoke tubular chassis. The bodywork came from the Besana brothers’ Ferrari 166SC, chassis no. 02 and was fitted on the chassis by the mechanics of Renato Nocentini's garage, at that time the Ferrari dealer for Tuscany. With the proper modifications to the nose to house the bulky Jaguar 3.5 litre inline six, the car debuted at the Circuito di Pescara, but resulted a DNF. Interestingly, the car later proceeded to compete in the Gran Premio d’Italia the following September, becoming the only Jaguar works-engined car to ever take part in the grand prix: after 15 uncompetitive laps, the Biondetti special withdraw for unspecified reasons. The car continued to race in the 1950 season, competing in the Bologna-Raticosa, Pontedecimo-Giovi and the Catania-Etna. During the winter, Biondetti worked on the car, improving the performance and the reliability for the 1951 season. As the most successful driver of a British car, Biondetti took part in the season, competing in 11 races, including the Mille Miglia, which resulted in a DNF and in the Firenze Fiesole.

Subsequentely, for the 1952 season, another Special was built around the W1147-9 engine, on a bespoke chassis by Biondetti, with a new coachwork with integrated wheel arches, reminiscent of the C Type,which is assumed to be built by Lotti, due to the degree of high finish (there is no evidence, however). The Biondetti Jaguar Special # 001 is a new car built specifically by Biondetti for the 1952 season: if the W1147-9 engine had already competed in 1950 Mille Miglia (# 729 Biondetti/Bronzoni) and 1951 Mille Miglia (# 437 Biondetti/Contini), this new car competed in 1952 Mille Miglia with Primo Pezzoli driver and Renato Cazzulani co-driver (# 620), resulting in a DNF. The car was then campaigned for the rest of the season, scoring wins at the Giro di Calabria, Bologna-Raticosa and at the Circuito di Reggio Calabria. Then, it was raced in the 1953 season for only four races and a DNS at the XX Mille Miglia, before being retired from active racing.