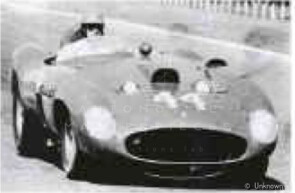 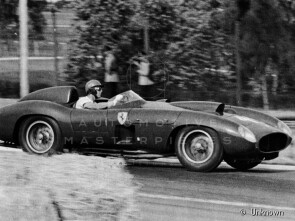 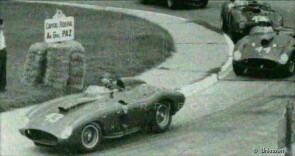 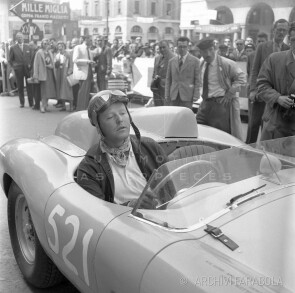 Share on
Owner Private collection
2nd of just three cars built. In 1956 it was driven by Luigi Musso and Peter Collins in the 1000 Kilometers of Buenos Aires, enrolled by Sture Nottorp in the Mille Miglia and involved in the story of an alleged sabotage, ranked 7th in Swedish Sports Car Grand Prix.

Within the Maranello company, the development and fine-tuning of new cars for the Sport category was almost feverish during 1955. Alongside the four-cylinder 750 and 860 Monza, the 6-cylinder 118 and 121 LM, in view of the Carrera Panamericana of that year, which should have taken place in November, Ferrari also built a powerful “barchetta” with a V 12-cylinder engine of almost five liters of displacement (4961.57 cc), called 410 S. On that engine, which on the test bench expressed an astonishing power of around 380 hp, the most important innovation was represented by a new ignition system, that for the first time adopted four distributors with twenty-four spark plugs, of which twelve placed outside the banks; these could be accessed through two doors on the mudguards. To withstand the inevitable stresses imposed by that engine, it was necessary to strengthen the chassis and equip the rear suspension with a De Dion axle. The expected debut at the Carrera Panamericana was not possible as the 1955 edition of the classic Mexican marathon was never held. The following year two 410 S were officially deployed at the 1000 Kilometer of Buenos Aires, one for the Fangio - Castellotti crew and the other for Musso - Collins. Unfortunately, despite the extraordinary performance offered by the engine, the transmission, severely tested by the powerful 12-cylinder, went into crisis on both cars, jeopardizing their victory. From the next race, the 12 Hours of Sebring, the two 410 Ss were sold to two private drivers, John Edgar and Sture Nottorp. In the meantime, Carrozzeria Scaglietti set up two other 410 S with single ignition: in the barchetta version for the Scuderia Parravano and a berlinetta, very similar to the 250 GT Competizione, for the French driver Michel-Paul Cavallier.

The 1956 Ferrari 410 Super America Competizione, chassis no. 0596CM (Scaglietti) is the second of the three barchettas built; it is the car entrusted to the crew Luigi Musso – Peter Collins for the 1000 Kilometer of Buenos Aires on January 29, 1956, the opening event of the 1956 Sports Car Championship schedule. Held on a composite circuit made up of long straights linked by a “parabolica” at one end and city streets at the other it was known as the Autódromo Municipal y Avenida General Paz. The race was 106 laps of the 9.476 km course for a total of 1004.5km and was described by some as similar to the daunting Avus circuit in Berlin. Scuderia Ferrari’s 4.9 liter behemoths thundered off with Peter Collins eventually setting the fastest race lap of 102.5mph before the 0596 CM retired with transaxle failures. It was the car’s first and last factory race. 0596 CM was sold to Swedish driver Sture Nottorp. Enrolled in the 1957 Mille Miglia with Nottorp and Tom Brahmer, racing for the Scuderia Ferrari Svezia, the legend of a possible sabotage hangs over this semi-official car, having been unable to start in the red arrow. The Swedish driver had a reputation for braggadocio; on the side of the car he writes “412” Super America Competizione instead of “412”, as if his car had mysteriously “something more”. The car had two aerodynamic airfoil behind the heads of the crew, but elsewhere, in its career, it will only have one. The details are lost in the mists of time and racing politics, however Nottorp thereafter firmly maintained that Ferrari sabotaged the car. The importance of race purses to Ferrari’s commercial survival in the 50s lends at least circumstantial support to Sture Nottorp’s contention that Ferrari saw the big 410 Sport as a serious threat to the factory entries. Nottorp, then, entered the 410 Sport in the 1956 Swedish Sports Car Grand Prix on August 12 with co-driver Olle Andersson. Sweden was the final race in the 1956 Sports Car Championship.The race was a stressful event and only 14 cars finished of 27 starters. One of them was Nottorp and Andersson in seventh. 0596 CM contested other events in Scandinavia for the next year and in November 1957 Nottorp advertised 0596 CM for sale in Road& Track. It was eventually acquired by Bill Danielson in the U.S. who entered it in several 1959 USAC road races in California driven by, among others, Tony Bettenhausen and Skip Hudson. After only a year’s racing Danielson advertised the 410 Sport again in late 1959 and then retired it where it remained in a state of suspended animation, exactly as it had raced, until it was acquired thirteen years later in 1972 by Pierre Bardinon’s renowned Mas du Clos museum. It remained there, still unrestored, for a further thirteen years. Subsequently part of important Ferrari collections, 0596 CM is now completely restored in race ready condition.