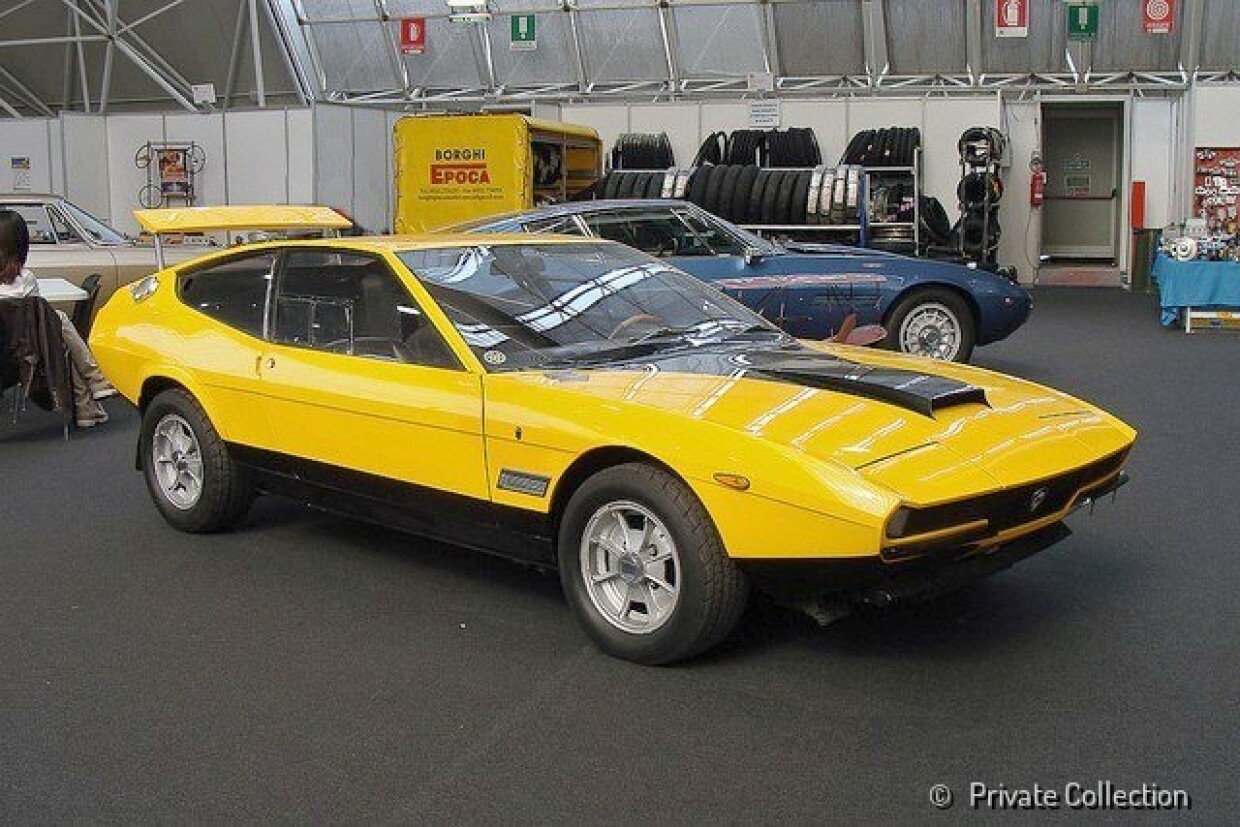 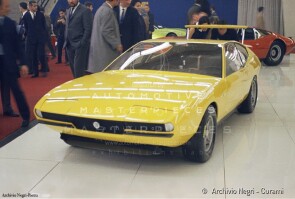 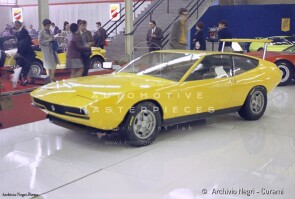 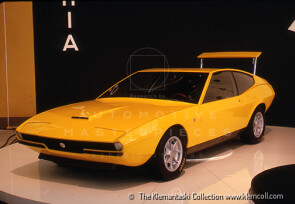 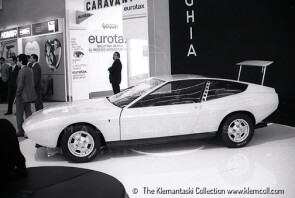 Share on
Owner Private collection
One-off concept by Tom Tjaarda on Fulvia HF 1600 basis, presented at 1969 Geneva and Torino motor shows. It was aimed at harmonizing aesthetic with aerodynamic.

The Lancia Fulvia. Before the Fiat takeover, Lancia was able to introduce a model that combined crisp Italian styling, capable performance, and advanced technology in a light and lithe package. That model, the Fulvia, was introduced in 1963 at the Geneva Motor Show and continued in production for years after Fiat took control of ailing Lancia. It was designed by Antonio Fessia and intended as a replacement for the Lancia Appia. The Fulvia was a front-wheel-drive vehicle where its predecessor, the Appia, used rear-wheel-drive configuration. Disc brakes were placed on all four corners. The DOHC V4 engine was designed by Zaccone Mina and mounted forward at a 45-degree angle. With sales that surpassed 300,000 units, the Fulvia sold in great numbers for a Lancia yet still was not a financial success. It was produced in several variations until 1976. The first Fulvia introduced was a sedan and, for 1965, a coupe was released. The coupe’s shape was more interesting than the sedan and both were designed by Pietro Castagnero. As the coupe aged, Lancia continued to provide sportier trim levels with even more powerful engines. Of these sportier trims, the 1.6 HF was the most impressive. It made 115bhp out of 1,584cc and, thanks in part to its 5-speed gearbox, could reach 180 km/h. The Lancia Fulvia, in sedan, coupe, and Sport forms, was successful in motor racing. The most notable racing achievements were accomplished by coupe models, used extensively in rallies. The highlight of Fulvia's racing career came in 1972 when a Fulvia 1.6 HF won the International Championship for Manufacturers rally series. The Fulvia was arguably the last "true" Lancia.

The Carrozzeria Ghia production was characterized above all by the high number of prototypes and one-off or very limited series cars. Founded in 1916 by Giacinto Ghia, the body shop had several owners and many important collaborations.

The Fulvia HF 1600 Competizione began to be conceived in the late 60s, when the Ghia included Giorgetto Giugiaro among its ranks, replaced in 1968 by Tom Tjaarda who will be responsible for the design of the car. In 1967 the Carrozzeria Ghia was bought by Alejandro de Tomaso, already the owner of the homonymous car factory. The Lancia Fulvia HF 1600 Competizione (Ghia), chassis no. 818540002279 is a one-off concept car presented at the 1969 Geneva International Motor Show and Salone Internazionale dell'Automobile di Torino. With the creation of this car, the Carrozzeria Ghia wanted to tackle the difficulty of harmonizing an aesthetic line with aerodynamic functionality and chose, as a starting point, the proven frame of the Lancia Fulvia 1600, which at that time had already achieved great successes. The chassis 818540002279 is part of the very rare "Fanalone" built for the special use of the "Reparto Corse" Lancia in only 20 examples. Most likely the chassis of this car is the latest produced in this series (the first being the chassis n°818540002259). Tjaarda and the Ghia style office, therefore, created a sober and functional bodywork for touring cars, with a very low and aerodynamic racing car line. To meet the need for maximum lightness, as this car was destined for racing and in the tradition of the style of the Ghia name, a bodywork was created that is a harmonious and geometric synthesis of the masses, with large glazed surfaces. The latter are all made of Plexiglas, with the exception of the special glass windshield, specially designed by the Belgian factory Glaverbel, to be able to reduce the thickness (3 mm) and thus obtain a lower weight. Taking advantage of the Formula 1 experience, but wanting to maintain a "double soul", as in a sleight of hand, the car transforms itself from a GT coupé into a racing car: it is sufficient, in fact, to press a button and from the rear it is raised a mechanically adjustable spoiler with a deporting profile, which increases the adhesion of the wheels proportionally to the increase in speed. The headlights are retractable and mechanically operated. The wheels are in magnesium alloy, with 13" rims and 7" channel, to the advantage of lightening the unsprung masses, stability and performance. The interior also has purely sporting characteristics: the dashboard, clearly inspired by aeronautics, with square instruments, follows the line already set externally. The seats are anatomically designed specifically to allow the rider and passenger to reach the end of long-distance races without getting tired. As for the mechanics, the frame of the Lancia Fulvia 1600 was subjected to small workings by the “Modenese” De Tomaso, who exploited its experience in formula races: all to obtain a lighter whole. The car was sold to a car collector and manufacturer in Turin who hold it for almost 20 years. In the early 2000s, it was purchased by an Italian collector living in Austria and was bought in 2012 by another Italian collector. The car underwent in 2014 to a complete restoration.