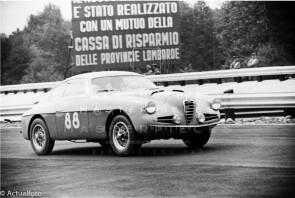 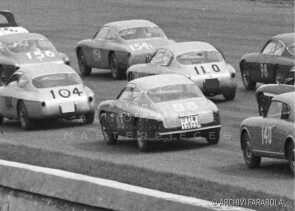 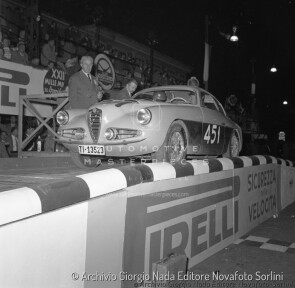 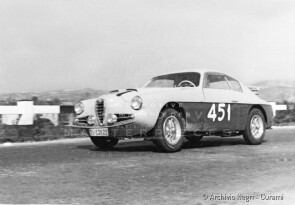 Share on
Owner Private collection
This SSZ raced in 1955 the Mille Miglia, finishing 2nd in class, and the Coppa Inter-Europa, ranking 11th overall. Over 50 years in the hands of the same owner.

Iginio Alessio, then general manager of Alfa Romeo, was concerned for the viability of the independent Italian Coachbuilding industry–the advent of the unibody chassis design was threatening to put the "carrozzerie" out of business. Alessio was also a personal friend of Gaetano Ponzoni co-owner of Carrozzeria Touring Superleggera, thus from 1951-1958 Alfa Romeo built five different variations of the 1900 unibody chassis specifically for independent coachbuilders. Alfa Romeo gave official contracts to Touring to build the sporty 1900 Sprint coupé and to Pinin Farina to build an elegant four-seat Cabriolet and Coupé. The availability of a suitable chassis led to many other coachbuilders to build versions of the 1900. Carrozzeria Zagato built a small series of coupés designed for racing. The Alfa Romeo 1900 C Super Sprint Zagato represent the maximum expression of Zagato in terms of lightweight bodyworks and aerodynamic efficiency. The fast yet heavy 1900 sedan was reworked by Zagato in order to provide the gentleman drivers of the GT category with a modern and very efficient car, designed on the short wheelbase chassis offered from Alfa Romeo. The 1900 SSZ (as unofficially known) is the sum of many different innovations, like the rounded shapes around the big Alfa Romeo 2-litres engine, the B pillars integrated in the side glasses with an extremely light aluminium frame, an aerodynamic lightweight aluminum body and, on some of the 1900 SSZ built, the famous Zagato's trademark double bubble roof “doppia gobba” which was able to lower the front section of the car and to increase the roominess and stiffness of the roof. These cars were individually hand-crafted. It is thought that just 39 examples (plus two bare chassis) of the 1900SSZ were built, from 1954 to 1957, and they are regarded as the pinnacle of 1950s production Alfa Romeos.

Chassis no. 01931 was delivered new early in 1955 to Vittorio Vanini - a successful wealthy privateer of the period, from the famous family of Swiss chocolatiers - through Sonvico, the Alfa Romeo dealer in Lugano, in the Swiss canton of Ticino. The rakish two-tone Zagato berlinetta was registered ‘TI 13523’. On 1 May 1955, in the hands of Vanini and co-driver Ivo Badaracco, 01931 participated in the Mille Miglia road-race carrying race number ‘451’. Starting, of course, at 4.51am they passed through the Rome checkpoint 6 hours, 44 minutes and 46 seconds later and crossed the finishing ramp in Brescia after 12 hours, 56 minutes and 11 seconds to claim 19th place overall: the first of Alfa Romeo 1900 SSZ and a superb second in class. In addition to their impressive Mille Miglia performance, the Swiss-Italian gentleman driving duo also contested theCoppa Intereuropa at Monza on 11 September, the same year; the GT race preceding the Grand Prix, finishing 11th overall. It has been hidden from view for most of its life and spent over 50 years in the hands of a very private, enthusiastic American owner.