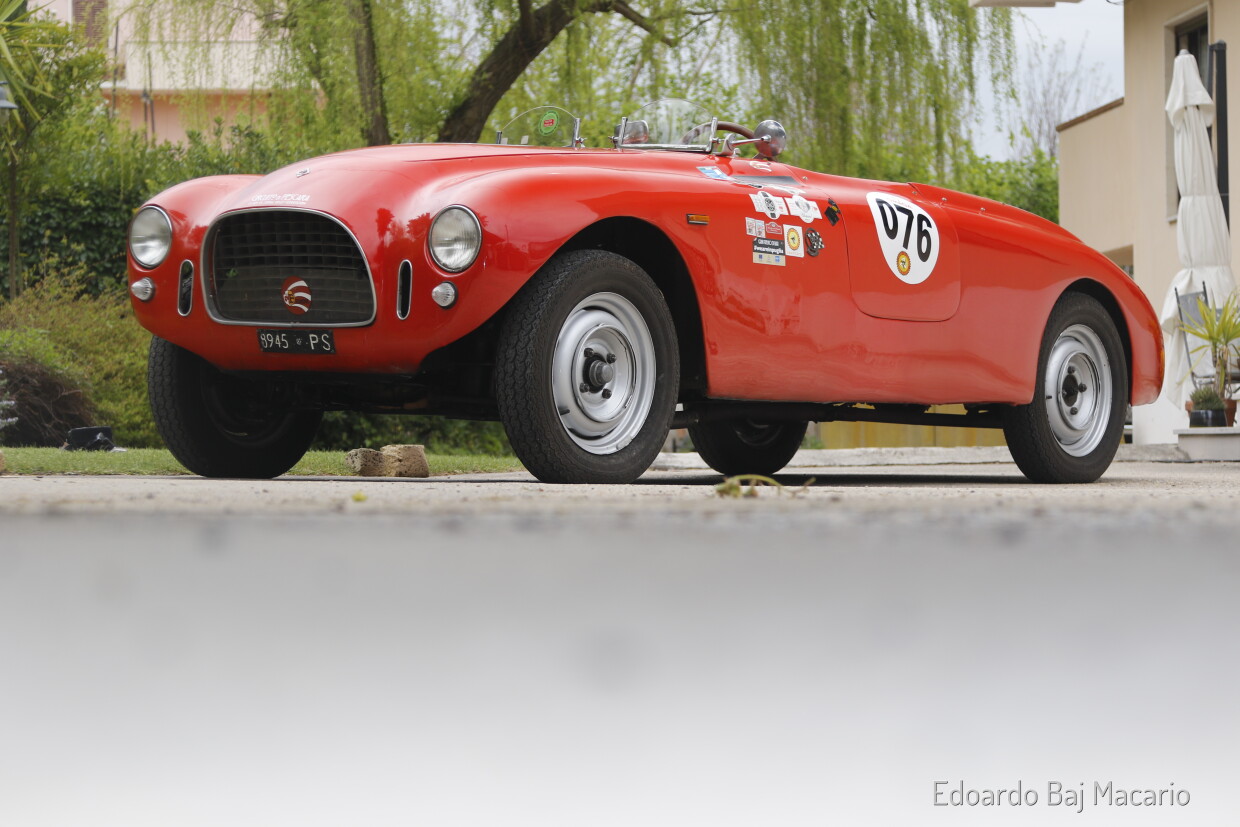 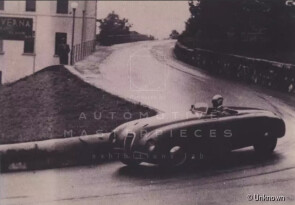 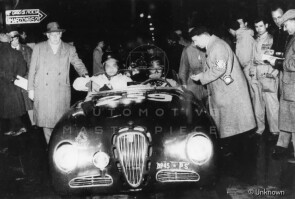 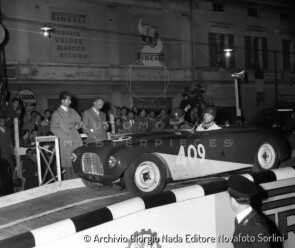 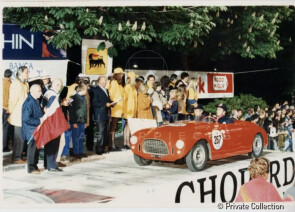 Share on
Owner Private collection
The only surviving of a limited production, ordered to Bertone by Scuderia Milan, is the first car with the famous DOHC ERMINI engine. It raced 1952 Mille Miglia.

Between the 1940s and 1960s, road races were maybe the utmost fascinating motor racing competitions worldwide: Italy was undoubtedly the absolute protagonist. ERMINI’s sports cars were among those that achieved a notable history of participation in these road races. They were, at the same time, actual sports cars and real dreams that fascinated all car enthusiasts. "Pasquino" Ermini was one of the most representative manufacturers of Italian sports cars. He began in the Emilio Materassi team, where he met the Alberto Massimino, coauthor of the ERMINI success. In 1946, Ermini developed a twin-shaft aluminium head for the Fiat 1100 block engine. In the first months of 1947, the first Fiat-ERMINI engine was completed. The name Fiat-ERMINI was due to the new CSAI regulation which required all vehicles to be registered, thus preventing people from giving them their name, as the testing costs were unsustainable. The big breakthrough came in 1949 when ERMINI cars began to participate at the Mille Miglia. From that moment on, the name ERMINI conquered great successes in class and overall, both at the Mille Miglia and in the most important competitions at the time. The palmarès was getting bigger every year. With the successes obtained, the requests to purchase the Fiat-based ERMINI engines raised exponentially, since they were considered the most powerful of the 1100 Sport Class. A significant number and type of cars used the Fiat-ERMINI engine. ERMINI cars evolved continuously throughout the years. Today we distinguish the Fiat-ERMINI (before 1952), the ERMINI (from 1952) and the ERMINI "motorised" cars. The most famous drivers of the time brought the ERMINI cars to success. The Bertone body shop was a family-run company. Nuccio, son of Giovanni Bertone (founder of the body shop), thanks to his skill in the economic field led, after the Second World War, his company to worldwide fame. Some of the greatest car designers of all time have been discovered and supported by him.

The car with chassis no. 279904 is the first that we know fitted with an ERMINI engine, so it’s an“ERMINI motorised” car. We don’t know if Pasquino Ermini built the engine on chassis no. 279904 as his first twin-cam engine. However, this engine is certainly the first that went beyond the experimental stage. Fiat 1100 Sport, chassis no. 279904, was born in 1946. "Scuderia Milan” commissioned this engine to Carrozzeria Bertone. The Scuderia wanted an aluminium sports car, on a modified Fiat 1100 B chassis. Bertone built very few cars of this type. The press of the time reports that the team ordered eight specimens for the Sport Nazionale category, but we know for sure of only three cars were made. They are distinguishable from one another for the different “noses” and features, and Nuvolari drove all during the races as he was part at the time of the Scuderia Milan team. It is possible that the chassis no. 279904 participated with Nuvolari to some of the 1946 competitions, in Asti and at the Circuito del Lido di Venezia. Pasquino Ermini noticed the car. As Scuderia Milan decided to dedicate to formula cars, they dismissed this one and later sold it to Ermini himself. Pasquino had just founded the T.E.S.S. company in Florence, his hometown. The T.E.S.S.’ logo was a rhomb engraved with the name TESS and the Florentine lily surmounting a racing car. That logo was affixed on the nose of the car, where it still is. The engine was transformed: with the twin-cam head and two Weber 32 RDP carburettors. With the car, chassis no. 279904, Ermini made his debut at the Piacenza Circuit in 1947 (2nd in class during trials), a race that made history for another illustrious debut, that of the Ferrari 125. At the end of the season, the car was sold to Siro Sbraci, a Florentine gentleman driver and a member of TESS, who participated with it to several events, obtaining various successes, both in the region and outside, including the participation in the Grand Prix of Rome, in Caracalla. During the same year, an irreparable failure made it necessary to replace the engine block. A Fiat 1100 S block was used, the power now reaching around 90 hp. The new engine received “ex officio” the no. 10-6551 (the original engine was no. 305909). The car was then sold to the driver Carlo Meoni, with whom it participated in various races (Giro di Toscana). In 1951, the chassis no. 279904 was purchased by the pilot Bruno Maroccini who started the 1952 season facing the Giro di Sicilia, where he was excelling in his class, right before the official Piotti’s Osca. However, a run off the road in Termini Imerese, near the finish line, put an end to his race. The impact severely damaged only the nose. Maroccini, who was an excellent sheet-metal worker in a famous body shop at the time, Ortolani in Pesaro, built a new nose, similar to that of the Ferrari 225 S, and returned to the races by participating, with the 409 number, in the Mille Miglia of the same year. Unfortunately, a problem with the steering forced him to retire. He kept participating in various events: from the city circuits in Senigallia to the uphill races classifying for the finals of the "Volante d'Argento" in 1952, in Catanzaro. The badge of the event is still on display on the side of the car. In 1955, the car ended his competitive activity, and it was used only occasionally by Maroccini. Vintage photos of the time portray Maroccini and the car that seems to be almost identical to the one that we see today. Currently, the car with chassis no. 279904 has been in the collection of the same gentlemen for about twenty years and is in the same state in which it was purchased, already approved by ASI. The car may have been subjected previously to a conservative restoration in the 80s, but no documentation about it is available. During the FIVA renewal, it has only been noted a veiling to revive the paint; itis uncertain whether it dates back to the repair in Ortolani’s body-shop or to the followingperiod. Nowadays, the car comes with a wonderful vintage "patina”. The car has undergone regular maintenance over the years. The engine was overhauledin the atelier of the famous specialists, Oresteand Franco Daddario. The car has still the original ERMINI twin-shaft head, a prestigious condition infrequent to be found in other cars, since the aluminiumof the first post-war period was often fragile and of poor quality. On this particular head the, equally rare, twin Weber single-barrel carburettorsare the same ones mounted by Ermini. The car hadthis license plate since1951when Maroccini bought it. The "contemporary" history of the frame no. 279904 refers to activeand successful participation in the re-enactment events, with outstandingperformances, without ever suffering breakdowns and always completing the events. Driven by Mauro Giansante it achieved the following positions: 4th at the 1996 Mille Miglia, 8th at the 1997 Mille Miglia; 5th at the 1998 Mille Miglia; 5th at the 1997 Coppa Oro delle Dolomiti; 2nd at the 2001 Coppa Oro delle Dolomiti: 2nd at the 2002 Coppa Oro delle Dolomiti; 1st at the 1999 Targa Florio; 1st at the 1999 Giro di Sicilia; 1st at the 2005 Coppa Cidonio; 1st at the 2010 Circuito del Montenero; 1st at the 2014 Circuito di Caserta; 1st at the 2014 Circuito di Avezzano; 1st at the 2013 Gran Premio di Bari; 1st at the 2017 Gran Premio di Bari; 1st at the 2015, 2016, 2017 editions of the Circuito di Pescara.