Tazio Giorgio Nuvolari (Castel d'Ario, November 16, 1892 - Mantua, August 11, 1953) was an Italian car and motorcycle racer. His sporting career spans thirty years from 1920 to 1950, with an interruption of over six years due to the Second World War. The career of the one who will be remembered by the press and by fans with the pseudonyms of "Mantovano Volante" and "Nivola" was anything but downhill. In the first years of racing Nuvolari had to overcome many difficulties and pursue for a long time those successes that they did not want to achieve. Nuvolari is universally recognized as one of the greatest drivers in the history of world motoring and is still remembered and admired today for his many and special qualities, as well as for his human qualities. 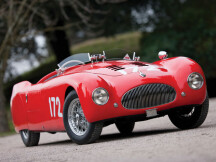