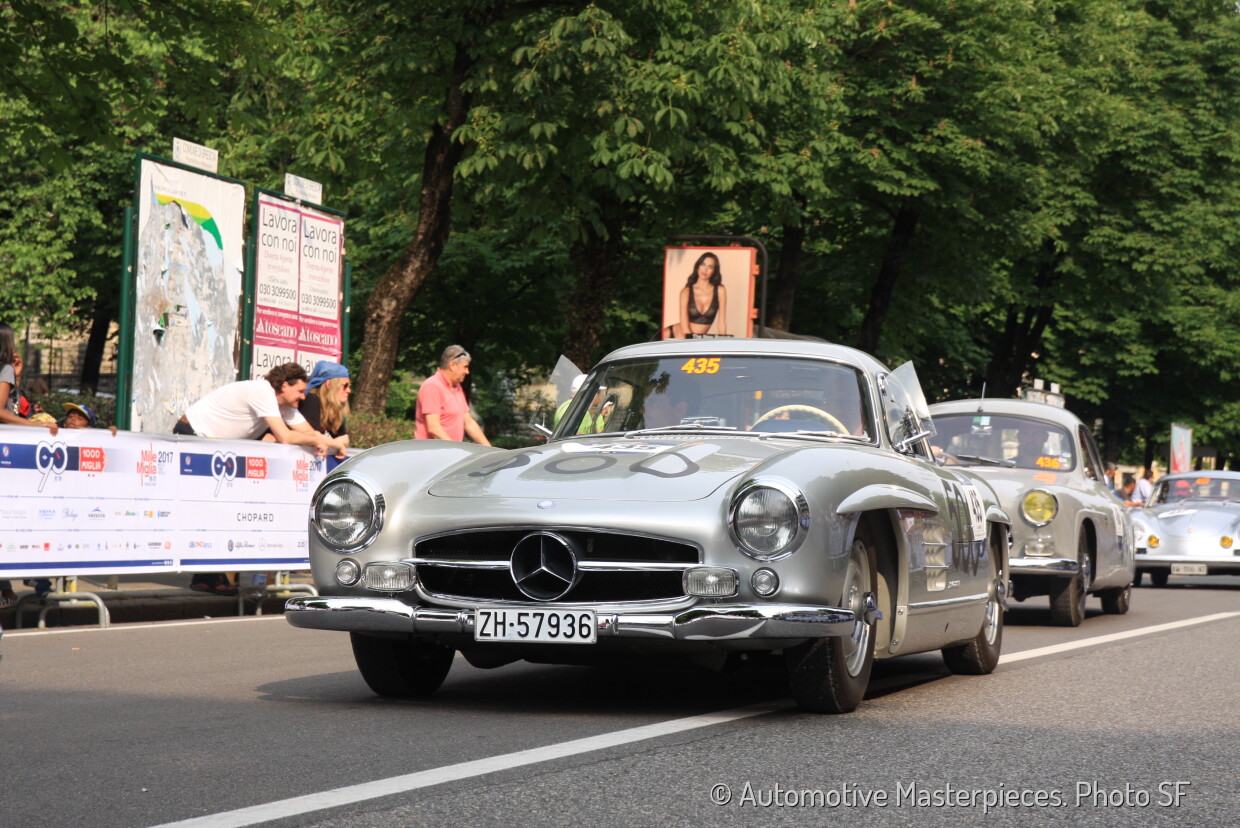 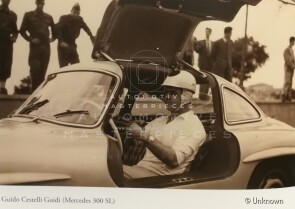 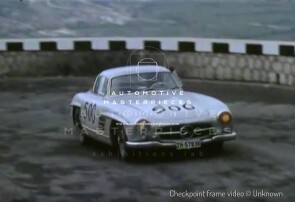 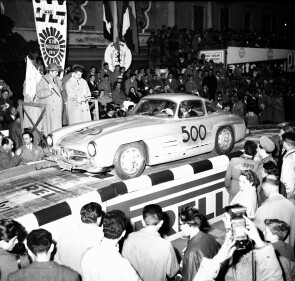 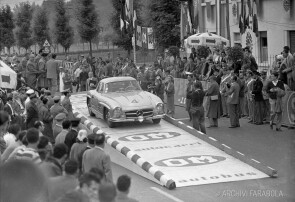 16th January 1957 Checkpoint (UK) Checkpoint is a 1956 British movie. The genre can be defined as a noir, a crime or a drama, it was directed by Ralph Thomas and starring Anthony Steel, Odile Versois, Stanley Baker, and James Robertson Justice. The film was shot at Pinewood Studios in London with locations in Italy, including footage of the 1956 Mille Miglia. The 198.040.6500028 appears in the race with the no. 500

1956 Mercedes-Benz 300 SL chassis 198.040.6500028 is peculiar, since it has a double story, as a race car and as a “pop-art icon”. It was one of the factory-prepared competition 300 SLs. The car was ordered and owned by Guido Cestelli-Guidi an experienced and capable racer, impressed by the performances of Armando Zampiero. The car was built for endurance racing, the Mercedes-Benz final assembly data card identifies this particular example built with competition “NSL” engine, competition suspensions, competition wider SLR type Rudge wheels and tires. The engine uses dual-point ignition, revised ignition and cam timing and a different fuel-injection metering unit which allows the engine to produce 250bhp rather than the standard 215bhp. Lighter weight is achieved throughout the car with details like an alloy starter motor rather than steel. Racing scaled instruments too are present: an 8,000rpm rev-counter and a 270kph speedometer. The car was heavily and successfully raced during the season 1956 and 1957, including two Mille Miglia, Targa Florio and Giro di Sicilia. In 1957 the car was registered in the name of Scuderia Campidoglio, where both Guido Cestelli-Guidi and his usual co-driver Giuseppe Musso (brother of the famous champion Luigi Musso) were members. An interesting note: another co-driver of Cestelli-Guidi was often his own wife. The car passed then in the hands of different owners until 1965 when Tony Russel, an Italian-American actor, discovered it by chance and purchased it. He felt that the old race car could help his image and acting career. Russel never raced the car and had problems finding competition replacements like the tires and high-octane fuel. The actor began somehow the “poster car” career of chassis 198.040.6500028. Still photos of Russel with the car have been taken by the famed Renaldo Tridici Studio in the beautiful Borghese Gardens in Rome. In the late ‘60s Russel returned to the U.S. with the car that, later, was bought by the 300 SL International Group President of the time, Mitch Leland. He entrusted a long and comprehensive restoration of the car in the hands of Scott Grundfor and Don Ricardo. The car came out in an astonishing red colour. Restoration completed, a renowned poster of this 300 SL was made and sold for many years through Mercedes Benz’s franchised dealers. In mid-1980s, to commemorate the centenary of Mercedes-Benz, the pop artist Andy Warhol was commissioned to do a series of paintings on the 300 SL Gullwing. His work was based on Leland’s red car original poster which Mercedes provided to Warhol rather to provide him with a vehicle. It was the first non-American designed object that Warhol had portrayed in his work. Several different versions of Warhol's work have had enormous diffusion and can be found in reproductions. 300 SL chassis 198.040.6500028, hidden in a private collection for a long time, is now on scene again at the main events, in its original silver-grey colour.