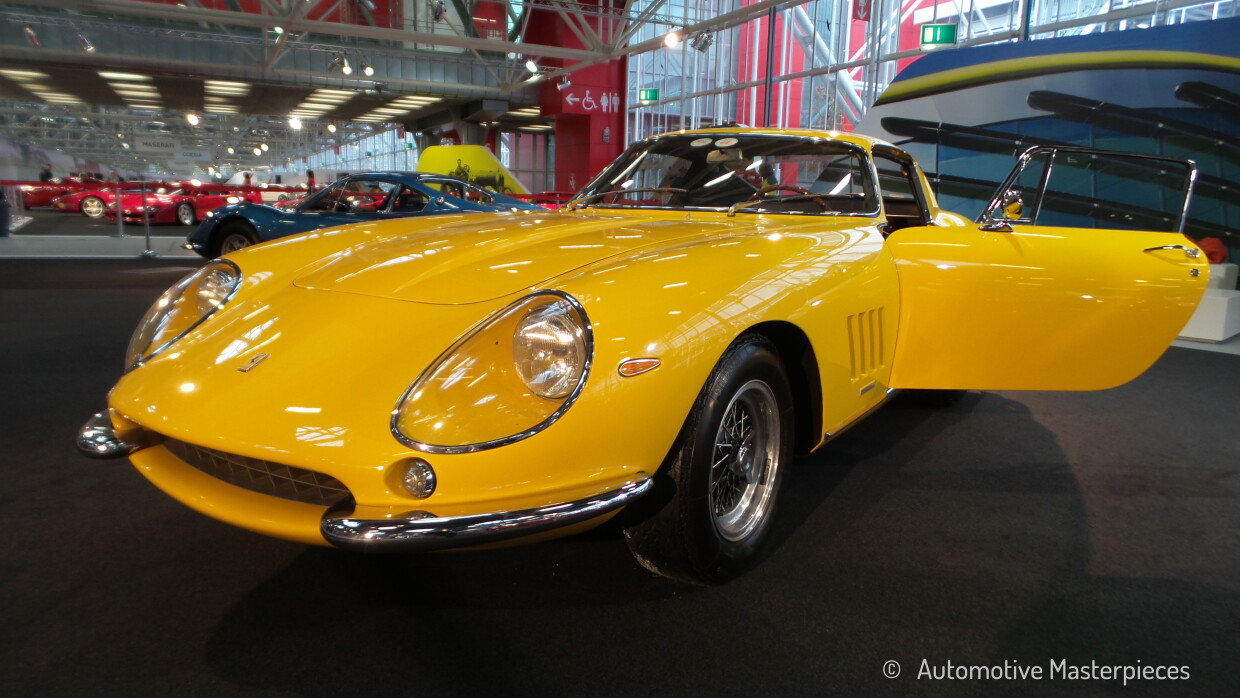 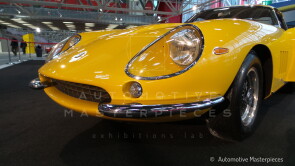 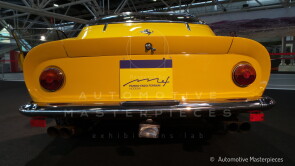 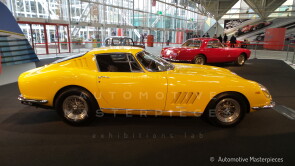 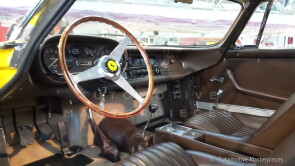 Share on
Owner Private collection
One of the most sought-after Ferraris, designed by Pininfarina and built in Modena by Scaglietti. This "Giallo Fly" example is preserved in the Museo Ferrari.

The Ferrari 275 GTB is a “Berlinetta” produced by the Italian car manufacturer Ferrari (hence the B in the acronym) and was presented for the first time in 1964 at the Paris Motor Show, together with the spider version called Ferrari 275 GTS. The GTB had taut and slender lines, with details reminiscent of the racing world such as the famous side air outlets, the truncated tail and the faired headlights. Commissioned by Luigi Chinetti's NART, ten spider-version cars were built between 1966 and 1967 but with identical bodywork to the GTB/4 berlinetta, except of course for the canvas roof, the 275 GTB/4 Spyder N.A.R.T. A racing version was also prepared, the 275 GTB/C Competizione. The 275 GTB was born in 1964 as heir to the Ferrari 250s but, compared to them, it assumed innovative technical characteristics. All 275 adopted, for the first time on a Ferrari grand touring car, the 4-wheel independent suspension and the 5-speed gearbox; the twin cam distribution was also adopted on the last 275 produced. All these important technical improvements were also introduced in response to the newborn Lamborghini who had first brought them to the production GTs with the 350 GTV. The line was due to Pininfarina which designed a sleek aerodynamic coupé body, supported by a frame with tubular side members with an oval 596 steel section with diagonal tubular extensions. The car had a long bonnet that emphasized the Maranello V12, which could cool better thanks to the renewed front grille and 4 louvers on the front fenders. The headlights were faired. The cockpit was all shifted to the rear, which had a very pronounced spoiler that helped the truncated tail function. On the rear pillar there were 3 other louvers for the stale air that came out of the passenger compartment. The berlinettas were assembled by the Scaglietti coachbuilder of Modena and could be either in steel with moving parts in aluminum, or entirely in aluminum. On the mechanical level, the alloy V12 designed by Gioachino Colombo was maintained with the increased bore to reach the unit displacement of 275 cc and the total displacement of around 3.3 liters. It was powered by 3 double-barrel Weber carburettors (which allowed 280 hp at 7600 rpm) or 6 double-barreled Weber carburettors (with power reaching 300 hp at 7500 rpm). This is both the last Ferrari with single shaft distribution and the first with double shaft distribution, GTB/4 version from 1966. The chassis was formed by a trellis of special steel tubes. The suspensions, developed with Mike Parkes, were four-wheel independent, with a quadrilateral pattern deformable on all wheels and front and rear anti-roll bars. The brakes were Dunlop 4-wheel disc brakes with brake booster. The biggest innovation was a completely new 5-speed gearbox built entirely at Ferrari, placed above the rear axle, in block with the differential, according to the Transaxle scheme. The steering was screw and roller. It wore light alloy rims even though it could have 15 "Borrani wire rims. All this made it very manageable and fast, however its performance was penalized by the weight and the disc brakes that were too small and not very resistant to fading.

At the 1966 Paris Auto Salon Ferrari launched the GTB/4 with the new four-cam Tipo 226 engine. It was an important evolution of this sports car that already had 4-wheel independent suspension, disc brakes and a 3.3-liter V12, the final development of the Colombo-designed “short-block” engine. The power through the Six Weber carburetors was again in the range of around 300 hp, but the engine was livelier at high revs. Again, the Ferrari 275 GTB/4’s wonderful body was designed by Pininfarina and built by Scaglietti. It was identical in appearance to the long-nose (II series) Ferrari 275 GTB, but it was easily distinguished by its bulge in the hood. The GTB/4 benefited from a variety of upgrades introduced into the series that were tried and tested in the 275 competition models. The 4 in the name GTB4 represented the twin camshafts per cylinder bank totaling four. This was the first quad-cam road-going Ferrari ever created. During its production run lasting until 1968, just 320 examples were built.

This very car, chassis no. 09573 is one of the 320 4 cams 275 GTBs. Painted in its stunning "Giallo Fly", the typical Ferrari yellow, has a private and "granturismo" story. It is now preserved in the Museo Ferrari itself.