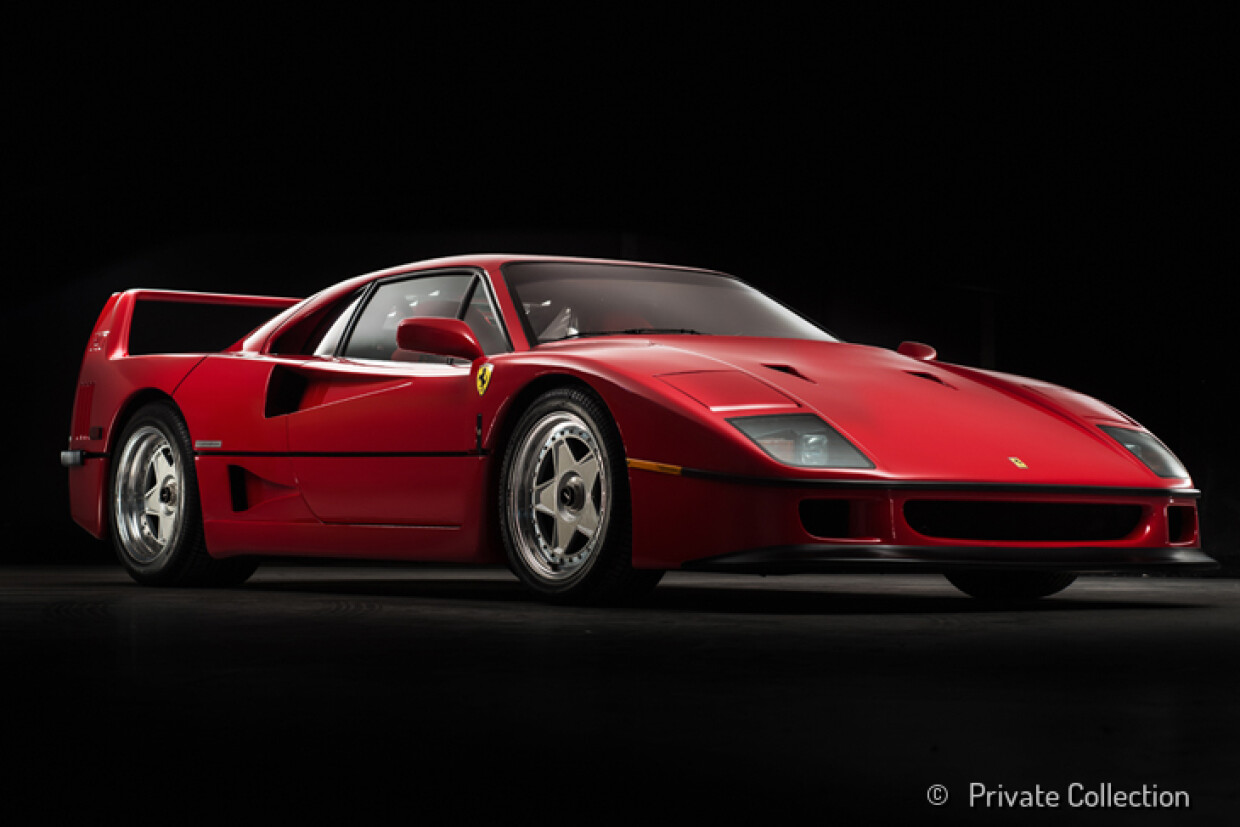 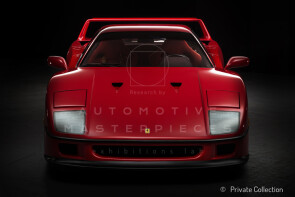 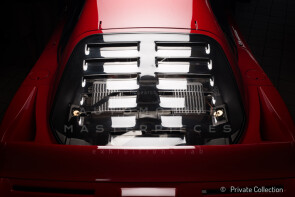 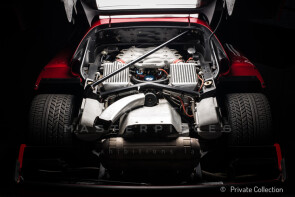 Announced in 1987 to celebrate Enzo Ferrari’s forty years as a carmaker, the 200mph F40 was the ultimate supercar of its generation. Inevitably, comparisons were made with the rival Porsche 959, but whereas its German rival represented a cutting-edge, technological tour de force, the F40 exemplified traditional Ferrari values. A relatively straightforward car, the F40 relied on enormous power, low weight, race-bred suspension, generously sized tyres and excellent aerodynamics to achieve a level of performance even better than that of the infinitely more complex 959.

Developed from the limited-production 288GTO, the F40 was a two- seater, mid-engined coupé that mounted its V8 power unit longitudinally in the chassis (rather than transversely like the 308/ 328) a layout that greatly simplified the accommodation of the twin water-cooled IHI turbochargers. Enlarged from the 288GTO’s 2,855cc to 2,936cc for the F40, the four-cam, 32-valve motor produced 478bhp at 7,000rpm, some 20 percent up on the 288.

In one of its aspects the F40 did rival the 959 for innovation, and that was the method of body/ chassis construction, which represented a new departure for a Ferrari road car. Drawing on Ferrari’s considerable experience in the use of composite technology in Formula 1, the F40 chassis comprised a tubular steel spaceframe with bonded-on panels of Kevlar, resulting in torsional stiffness greatly exceeding that of a metal-only structure without the penalty of excess weight. Carbon fibre was used for the doors, bonnet, boot lid and other removable panels.

Using a wind tunnel and computer projection, Pininfarina produced a body that generated sufficient downforce without excessive drag, while avoiding the aerodynamic excrescences that adorn so many out-and-out competition cars. Nevertheless, there was no mistaking the pugnaciously styled F40’s antecedents as one climbed inside, the body- contoured seats, absence of carpeting and trim, and simple, lightweight door pulls only serving to re-enforce its image as a thinly disguised race car.

After the runaway success of its 288 GTO predecessor with collectors, the F40 was always going to be much in demand but probably nobody could have anticipated the frenzied interest which greeted its launch, and the extent to which buyers would go to secure one. Only Ferrari’s best clients were allocated an F40, which was built in strictly limited numbers, and those not lucky enough to be on the list paid premiums of up to four times the factory price to own one.

Luckily the first owner of this car didn’t have such worries: he was one of the America’s most respected businessmen, transforming the fortunes of the household name newspaper which had been in family hands for three generations. His name was Otis Chandler, publisher of LA Times.
His sudden retirement in 1980 at the top of his powers prompted surprise throughout the industry. Chandler was now able to devote himself fully to his hobbies including the Otis Chandler Vintage Museum of Transportation and Wildlife, which he built in Oxnard, California, to display his extensive car and motorcycle collection and trophy animals from his many hunting safaris.
His 1992 model year F40 is one of 213 originally built for the US market and, as a late production car incorporating the various developments made during the 1987-1992 build run, was delivered to Ferrari North America in November 1991: on the USA-version cars, the 10th digit designates the Model Year so ‘L’ is 1990, ‘M’ is 1991, ‘N’ is 1992 etc. As one might expect knowing the first owner’s character, Chandler did not buy his F40 just to look at. He drove it, and drove it fast, which is probably why in 1992 he rear ended it into a wall.

No tags are available