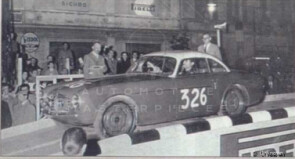 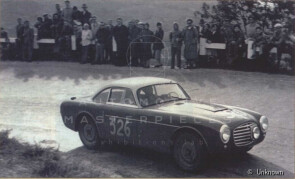 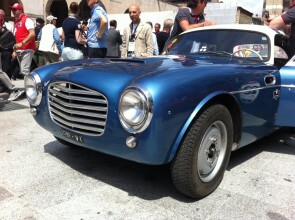 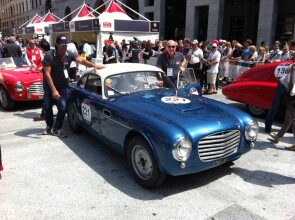 Share on
Owner Private collection
One of 300 Daina Sport produced, one of just two with the body built in aluminum. 5th in class at the 1952 Mille Miglia with the couple Comirato-Dumas.

With the aim of producing a car that is not for competition but nonetheless sporty as well as elegant, the Siata Amica was joined in 1950 by the Daina, a grand touring car with mechanics derived from that of the Fiat 1400 and a box frame designed by Siata; it was produced in two body versions: coupé and convertible. The latter was presented at the Geneva Motor Show of the same year simultaneously with the presentation of the new Fiat 1400; that is to say that Fiat had supplied Siata with the mechanical parts of its new car even before its debut. A sign of mutual collaboration, which began twenty years earlier and is destined to last for a long time to come. The Daina engine was a four-cylinder with 82 × 66 mm bore and stroke, for a total displacement of 1393 cc, it produced a power of 65 hp instead of the normal 44 hp and had a five-speed gearbox plus reverse gear; the Siata Daina in the coupé and convertible versions had the bodywork made by the Stabilimenti Farina and could reach a maximum speed of 150 km/h. The design of the grille, similar to that of the MG TD, led in 1951 to the creation of the Rallye 1400 model, a true imitation of the English car; meanwhile the range had been enriched with normal and extended wheelbase frames and with six-seater limousine and woody station wagon versions. The evolution of the Daina culminated in 1952 with the 1400 Gran Sport model, an elegant and sleek 65 hp spider, and with the Daina Sport, a particularly sporty coupé; in both versions made by Stabilimenti Farina, the shield grille with a classic design had been abandoned in favor of a more modern horizontal line. The Daina Sport was also based on the Fiat 1400 engine but could be supplied on request with a 1500 cc 75 hp engine. Both the coupé and the spider had sheet metal bodywork but it appears that examples were built in aluminum for competitive use.

The competitive activity of Siata Daina Sport, chassis no. SL*0274*B, experienced moments of glory in 1952 with the Venetian driver Alberto Comirato. He was already known in the world of speed races on the road and on the track especially for the second place overall obtained in the 1940 Mille Miglia paired, as always, with his wife Lia Dumas, at the wheel of an original Fiat-Comirato barchetta 1100 sport set up by himself. The couple Alberto Comirato and Lia Dumas, together in the race and in life, were always very fast and elegant. They participated in various editions of the Mille Miglia and in many other competitions. In 1952 Siata set up two Daina Sport 1500 cc with full aluminum bodywork. Alberto Comirato, in a semi-official form, entered one of these cars in the XIX edition of the Mille Miglia, which took place on 3 and 4 May. His car bore race number 326 and was entered in the up to 1500 cc class of the Gran Turismo Internazionale category. There was numerous competition from cars belonging to the same class. Considering that this was made up of cars that had engines of displacement between 751 and 1500 cc, the most fearful cars on paper were certainly not the custom-built Fiat 1100s, the Cisitalia or the 1100 cc Porsche 356s, but the other Siata Daina. Sport and Gran Sport, a Fiat 1400 berlinetta Touring, some Maserati A6 1500s and above all the 1500 cc Porsche 356s. Therefore, starting at 3:26 from Brescia Alberto Comirato and Lia Dumas passed through Rome after 8 hours and 41 minutes, which meant being in seventh place in class at the halfway point of the great road race. The withdrawal of Walters-Crivellari's Fiat and the loss of positions by cars such as the Cisitalia 202B of Musitelli-Musiteli and the Fiat 1100 Zagato of Martinengo-Zagato, increased the possibility of making a good impression at the Comirato Daina Sport. In the end, in fact, despite four stops to replace the windshield wiper, the car finished the race in fifth place in its class and 62nd overall position, out of 302 cars that had started and 272 that reached the finish line in Brescia. It was after this Mille Miglia that Alberto Comirato bought the car from Siata. Less than a month later, on June 1st, we find the car registered with the race number 1128 at the fourth edition of the Coppa della Toscana, a road speed race born in 1949 from the collaboration of the Automobile Clubs of the region. The Siata Daina Sport 1500 of the Comirato-Dumas couple showed up for checks in the same livery as the Mille Miglia, with the TV 14 test plate on the left of which the triangular emblem of Weber, the Bolognese manufacturer of carburetors, was applied. The Coppa della Toscana included departure and arrival in Florence after a 736 km ride. 213 cars started and 121 arrived at the finish line confirming the toughness of the race. The Siata, chassis no. SL*0274*B, from Comirato was however forced to retire, due to the breakage of the differential box which for the occasion had been built for experimental purposes in aluminum. Alberto Comirato also entered his Daina Sport in the fourth edition of the Coppa Intereuropa, a speed race to be held on 7 September 1952 on the Monza racetrack. At the end of the two-hour race he finished third in class II of the Gran Turismo Internazionale category, the usual one for cars with engines from 751 to 1500 cc. But the good placings of the private driver's blue and white car didn't end there. The Daina Sport of Comirato did honor along the more than 14 km of the route that led from Vermicino to Rocca di Papa, conquering the first place in the class. On that occasion, 60 competitors had honored this ancient Lazio speed uphill race, better known since 1932 as the Coppa Gallenga. 1952 was the last year of racing for Alberto Comirato, who was born in 1899. There is no news regarding the subsequent history of Siata Daina Sport, chassis no. SL*0274*B. Taking a leap forward to the present day, we only know that the car is presented today in the blue and white livery of its best racing era and according to the current owner, with the same wiper problems that had tormented Alberto Comirato at the Mille Miglia of that far 1952.