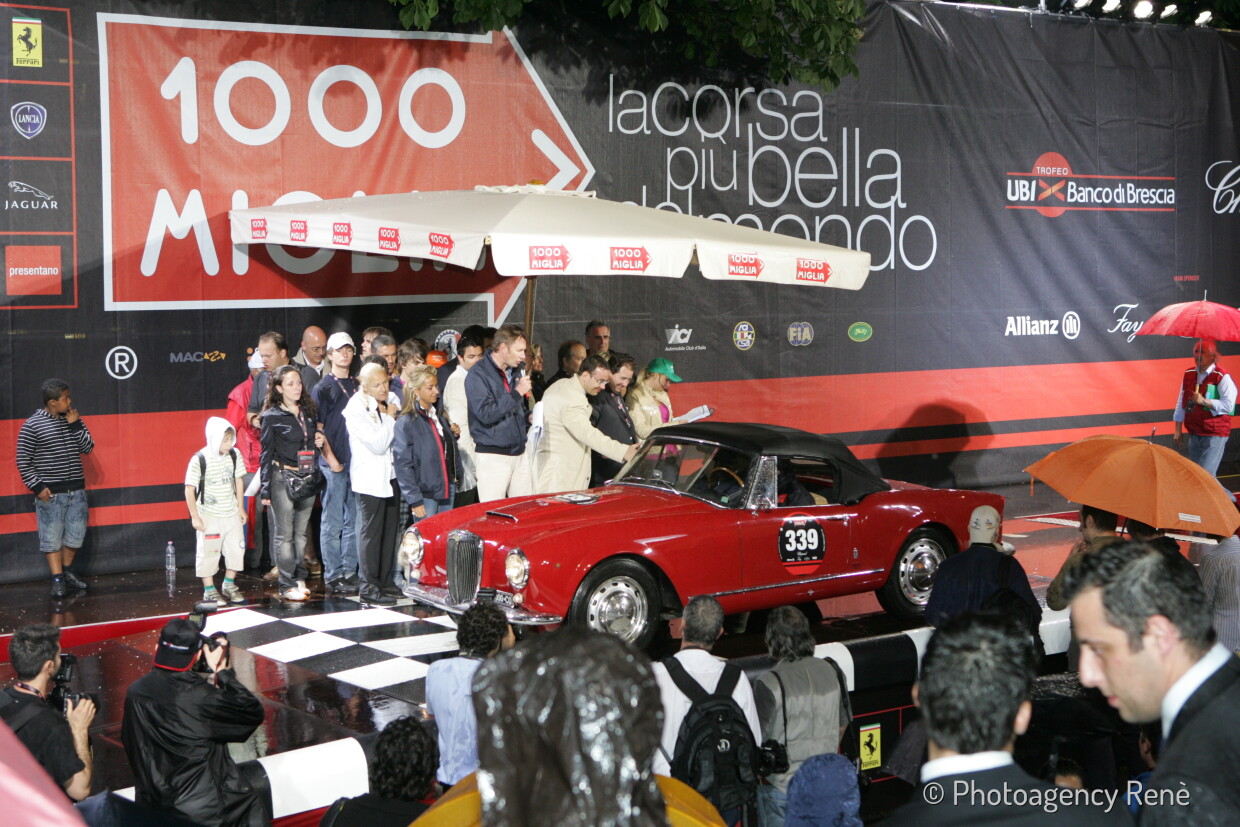 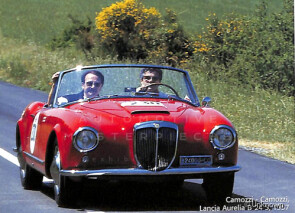 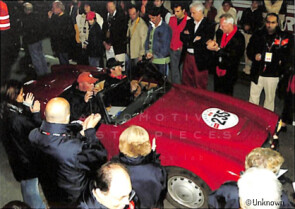 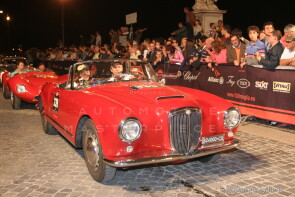 Share on
Owner Private collection
A so called II series or interseries Lancia B24S. One of 150 built and officially called Convertibile "America". From late 90s in most editions of Mille Miglia.

According to automobile historians, the Lancia Aurelia B24S is one of the most beautiful cars ever built in the world. "When you see an Aurelia B24 you don't want just to look at it, you want to touch it," loved to say Franco Martinengo, director of the Centro Stile Pininfarina. For many years Mr Pininfarina kept only for himself a version with a hard blue top. The first Lancia car of the post-war period, the revolutionary Aurelia designed by Vittorio Jano appeared in 1950. It boasted a series of revolutionary innovations: the first V-6 engine with a V of 60° as standard, developed by Francesco de Virgilio, 1.8 litres, the unibody with independent four-wheel suspension, the transaxle clutch-gearbox-differential and inboard rear brakes, were the essential technical features. The Aurelia presents the qualities of comfort, luxury and ride’s flexibility. A year later, in the spring of 1951, arrived an engine with a displacement of 2 litres, fitted on the new B20 coupe and, as an alternative to the 1.8 litres, on the sedan. In 1953, Lancia introduced on the Aurelia a new de Dion tube rear suspension. Later, an open-top version, the B24 Spider, was introduced. It was mechanically similar to the B20 coupé, fitted with the 2.5-litre engine, with an 8 inch (203 mm) shorter wheelbase. One of Pinin Farina’s masterpieces, the Lancia B24 Spider, was first shown at the 1955 Brussels Motor Show and immediately loved by the public for its unusually clean lines. The young Gianni Lancia’s ideas were those of an elite and sporting product, with a design winking at overseas trends. He commissioned the first car to Pinin Farina, which already had experience in this specific sector, having created a spider in 1952 on behalf of the American Nash. The design was stunning. Among the details, the panoramic windscreen stands out. The production of the spider ceased in October 1955, with 240 units produced: 59 right-hand drive and 181 left-hand drive. The 'S' stood for 'sinistra' - Italian for 'left'.

When the Pesenti’s family took over the Lancia company, the open-top version of the Lancia granturismo saw a transformation that made it less original but also eliminated several inconveniences of the previous "Spider". The new version of the B24 officially called "Convertible America", debuted at the Turin Motor Show on April 21, 1956. In addition to the several mechanical modifications that also affected the B20 and which sacrificed a few horses, the new B24 appeared more classic and comfortable: the panoramic windshield disappeared, the (more wraparound) bumpers no longer had the unique "wings", the air intake on the bonnet was modified (greater width and less height), the wider doors had handles, and descending windows, the dashboard and the instrumentation were different. This series was supplied exclusively with left-hand drive. Contrary to what happened with the sedan, the Aurelia B24 has never been officially classified by "series," but the subdivision has entered the common use. The B24 Convertible America, the so-called "series II" or "inter-series," were built in 150 units from July to December 1956. In the early months of 1957, the B24 Convertible underwent the same mechanical changes as the B20 coupe. Unchanged from an aesthetic point of view, this third (and last) series officially loses the name "America". In the price list up to May 1959, it totals the most significant number (371) of specimens. Pilots used the coupé B20 as a racing car. Therefore, the B24 was used mainly for leisure. Nevertheless, it participated also in races, and two B24s ran the Mille Miglia in 1956 and 1957.

Chassis B24S-1281 is one of the 150 examples of B24S Convertibile America and it was owned by Cav. Attilio Camozzi, an Italian Industrial and former Museo della Mille Miglia President. From late 90s the cars participated to most editions of the “red arrow”.