Lorenzo Avidano, born in Turin on February 28, 1921 and died on November 2, 2018, after having started working at SIATA in 1939, moved to Cisitalia and then joined the court of Carlo Abarth. From being a traveling salesman for the sale of Abarth mufflers, Avidano soon became Abarth's right-hand man, remaining by his side as general manager until the Scorpio company passed to Fiat; even following this acquisition, Avidano kept the Abarth tag, which he returned in 1981 and then founded a design office together with Mario Colucci, another famous figure in the Abarth technical office. 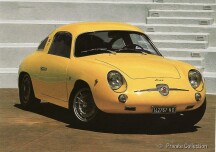