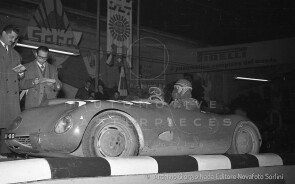 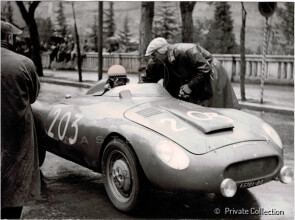 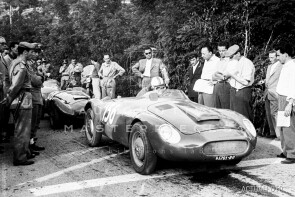 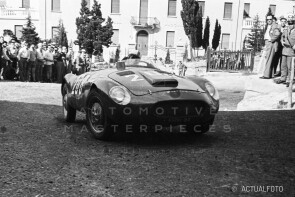 The Panhard Dyna X is a subcompact class car produced from 1948 to 1953 by the French car manufacturer Panhard. The Dyna X is the first mass-produced car with an all-aluminum body. In 1943, engineer Jean-Albert Grégoire presented a car that incorporates the technical principles of the Amilcar Compound (chassis and suspension), designed on the initiative of the Aluminium Français to promote the use of aluminum in automotive construction. No manufacturer seems interested. However, within the "Plan Pons", Panhard signs an agreement with Grégoire to resume the development of the AFG prototype (Aluminium Français - Grégoire) by supplying the mechanics. The car, which is called Dyna, was born, it has an aluminum body, steel frame, air-cooled aluminum 610 cc twin-cylinder engine, four-speed gearbox, four-wheel independent suspension with coil springs at the front and torsion bars at the rear axle and, above all, front wheel drive. The Dyna was presented at the 1946 Salon de Paris. Production began in October 1947 and the bodies were subcontracted by the Facel-Métallon company (future manufacturer of the luxurious and powerful Facel Véga). Starting from 1948, the small car is sold as Dyna X type 100 (X84), referring to the maximum speed of 100 km/h, with very few differences compared to the 1946 prototype. The 1950 models are distinguished above all by a new grill with central circular motif. Type 110 (X85) replaces type 100. The 3 hp engine rises from 22 hp to 28 hp SAE. In April, a 745 cc 4 hp engine with a power of 32/34 hp is mounted on the type 120 (X86). In February 1952, the new optional 4 hp Sprint engine offers 36/37 hp thanks to a new camshaft and a double barrel carburettor. In April the derivative roadster Dyna X Junior is launched. In June, the Dyna X type 130 (X87) was equipped with a 5 hp 851 cc engine. In December, types 110 and 120 are eliminated. For the 1953 models, the type 130 reaches 130 km/h with the option of the Sprint 5 hp 40 hp engine. The Dyna X was a fairly generous car for the market segment it was going to occupy: its 3.82 m in length brought it closer to higher-class cars, but its small engine put it in competition with cars such as the Renault 4CV, one of its most direct rivals. It was available both as a sedan, as a convertible and also as a station wagon; the van version (Dyna K) also arrived. The line was decidedly nonconformist, very rounded, with protruding front headlights. The public, initially perplexed because of the unusual shapes of the car, then ended up appreciating it, by virtue of its handling and economy. The performance was also more than good for the time. The Dyna X was built on a tubular chassis and the aluminum alloy body made it lighter and therefore more lively in road behavior. There were many sporting interpretations and the coachbuilders created aerodynamic sports cars, both closed and open. In 1953, the Dyna X was discontinued and replaced by the Dyna Z.

The car with chassis no. 481821 was built in 1954 on a Panhard Junior X86 chassis, with expressly tuned engine, with bodywork handcrafted in the Modena area with a light aluminum "skin" (F.lli Rimondi) sitting on a frame of light tubes (Zucchelli) in a 2-seater "barchetta" type, with the lines that, especially in the front, initially had an aerodynamic shape and somehow Panhard appeal, with a third central headlight. After the first racing season, in 1955 the nose received a larger and more classic air intake with a design reminiscent of the Ferrari styles of the time. It was sold new by Gastone Crepaldi, not only a well-known Ferrari dealer, but head of the Ital-France team, responsible for the Panhard competitive effort in Italy and, at that time, official importer of Panhard cars in Italy. The car participated with its first owner, Adriano Zerbini of Bologna, in the last four editions of the Mille Miglia speed race, in 1954, 1955, 1956 and 1957. In 1954 it ranked 8th in class and 125th overall. The car had a noteworthy racing career with the first owner who drove it in some of the most important races on the Italian territory of those years, such as the Trofeo Supercortemaggiore, the Corsa in salita sulle Torricelle, the Coppa della Consuma among others events. Sold in 1957, it had 4 other passionate owners, before arriving, in 1982, in the hands of the last owner who has kept it, therefore, for 39 years. The chassis car no. 481821 is still registered with its original Bologna plate from 1954. Initially and perfectly restored by Mario Galbiati, using all the original parts, the car undertook a second exciting career since 1986 in re-enactment races for vintage cars, such as the Coppa d'Oro delle Dolomiti and the Stella Alpina, ranking 1st overall at the Coppa dei Due Mari in Riccione. In 1992 it participated in the historic Mille Miglia with a very good result: 5th overall and 4th in class C. In 1993 it was involved in an accident while facing the Mille Miglia, which led to a deep restoration: what was unrecoverable was rebuilt, everything else was kept; the chassis number, still present, has not been compromised. Restored by the F.lli Lopane, with digitization of the Politecnico di Milano and mechanics cared by the specialist Cesare in Valenza, the car has found its place in the circuit of the most important vintage car events. It is fitted with an 850 cc engine tuned for the period races but a conforming to the original disassembled engine (no. S3 *021335*) is also present. The car is published in the book "MILLE MIGLIA'S CHASSIS The Ultimate Opus Volume II".