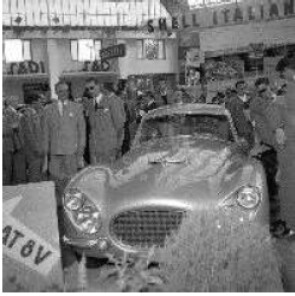 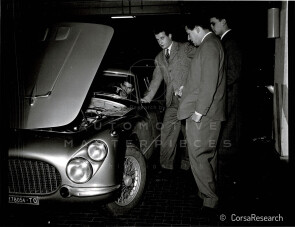 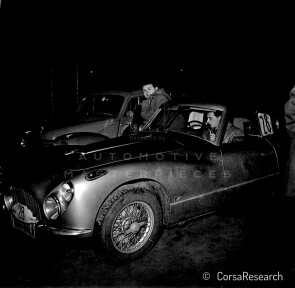 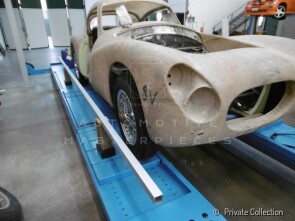 Share on
Owner Private collection
The car pictured in the official sales brochure of the II series "Fiat 8V". Exposed in 1953 at the Fiera del Levante in Bari and at the Salon Internationale de l'Automobile – Paris; in 1954 at the Salone Internazionale dell’Automobile in Torino. Its 1stregistered owner was Umberto Agnelli and it was entered in the Sestriere International Automobile Rallye.

In the postwar period, Fiat was working on an eight-cylinder engine internally known as Tipo 106. The engine was originally designed by Dante Giacosa for a luxury sedan, but that project was stopped.
Rudolf Hruska, at the time working at the S.I.A.T.A., was given the task to design a car around the V8 engine. The development took place in absolute secrecy. As not to stress the experimental department of Fiat, production of the chassis was also taken up by S.I.A.T.A.
Styled by chief designer Fabio Luigi Rapi, the Fiat 8V or “Otto Vù” was presented to the Italian press in February 1952 and first exhibited the following March at the Geneva Motor Show.
The car shapes saw several changes in time: the prototype used an art deco grill that extended into the hood. A second series was made featuring four headlights with some of the later cars having a full-width windscreen.
A high-performance coupé, destined to compete in the GT class: the 2-liter 8V model was a departure from the usual Fiat production. It was really welcomed by Italian private drivers, it inspired the tuners and it was, in a word, the car to beat in the 2-liter class, also thanks to the special versions built by Zagato or Siata.
The Fiat V8 had a 70° V configuration of 1996 cc of displacement, at 5600 rpm the engine produced 105 hp (78 kW) in standard form with double two-barrel Weber 36 DCS carburetors, giving a top speed of 190 km/h (118 mph). Some engines were fitted with huge four-throat Weber 36 IF4/C carburetors offering 120 bhp, but the intake manifold was very rare. The Fiat 8V is the only eight-cylinder built by Fiat. The engine was connected to a four speed gearbox. The car had independent suspension all round reworking the Fiat 1100 ones and drum brakes on four wheels.
As the body was welded to the chassis it was a semi-unitary construction.
Only 114 of these high-performance coupés had been produced, 63 with a “Fiat Carrozzerie Speciali” body, 34 first series and 29 second series.
It was made available anyway in different body styles, offered by the factory and by various coachbuilders like Zagato, Pinin Farina, Ghia and Vignale.
The production ceased in 1954.

The car with chassis 106.000067 originated in the second half of 1953 and is probably the first Fiat 8V produced and bodied by Carrozzerie Speciali Fiat as the second series. It is believed to be the car used for the realization of the photo shoot used for inclusion in the official sales brochure of the "Fiat 8V" (first version of the brochure). The car is used to show and exhibit the new model to the general public. On August 29th, 1953 the car was transferred to the Fiat branch in Bari, to participate from September 5 to 23, 1953 in the 17thedition of the Fiera del Levante event in Bari, in the "Auto Show" pavilion. During the Fiera del Levante in Bari in 1953 it is noticed by the newly elected King Hussein of Jordan who will be immortalized in the driver's seat. The well-known minister Pietro Campilli also noticed the car and was immortalized on the stand. On September 15, 1953 the car was exported to the Sevita agricultural machinery distributor in Puteaux, France, distributor of the Fiat  brand among others. The aim is to participate from October 1 to 11, 1953 in the 40thedition of the Salon Internationale de l'Automobile - Paris, in the exhibition areas: Grand Palais and Parc des Expositions. On November 12, 1953 the car was re-imported to Turin; some external details are updated and a graphic update of the official sales brochure of the “Fiat 8V” (second version) is carried out. It is believed that the car with chassis 106.000067 is also the one exhibited at the 36thedition of the Salone Internazionale dell’Automobile - Turin from April 21 to May 02, 1954 at the Palazzo delle Esposizioni at Valentino. It is also believed to be the car immortalized in the photo shoot with fictitious number plate (Turin) TO164654 in June 1954. April 8, 1955 is the date of the certificate of origin inserted in the chronological extract of the plate TO178054 and April 15, 1955, the car receives the 1stregistration with license plate (Turin, I) TO178054. The 1stregistered owner, on April 16, 1955, is a well-known name: Umberto Agnelli who buys it for 840,000 Lire. Grandson of Giovanni Agnelli and brother of Gianni, he was President of Juventus Football Club, Senator of the Italian Republic and, finally, President of Fiat SpA from 2003 to 2004. During the period owned by Umberto Agnelli, the car was entered in the Sestriere International Automobile Rallye, in the Gran Turismo category, in the class from 1300 to 2000 cc., as crew no. 28 conducted by the Acutis / Abate team which did not qualify. Giorgio Acutis was an emerging driver and Social Champion of the class up to 1300 “GT di Serie Normale” in 1953 as well as an active driver at the well-known “Racing Club 19” team. Later, in 1956, the car was registered in the name of R.I.V. Officine di Villar Perosa SpA, an Italian engineering company, born as part of FIAT specializing in the production of ball bearings. In July 1957, Riccardo Totta became the 3rdowner; he was among the founders of the machine tool company SIMU (official supplier of Fiat) and honorary consul of Austria in Turin from 1989 to 2007, as well as a consultant to the Agnelli family. The somewhat frightened memory of the car in 2017 by Ingrid Totta, widow of Eng. Riccardois particularly nice. She remembered the car used for some pleasure trips in Austrian territory, but defined the car as purely "masculine", due to the hard controls, the loud noise and the non-existent trunk, cluttered with the spare wheel. She also remembered a "grumpy" nature due to its sporting temperament, so it was easy to get the sparks dirty. But she remembered it beautiful and dressed in an elegant metallic color. After other changes of ownership that saw the car return to Fiat, change the number plate (TO193934) for a short period and end up in Pinin Farina, the car was withdrawn from circulation in 1960. During the 1970s it was recovered by Giulio Dubbini who also owned the Fiat 8V (Zagato) 106.000076; when he decided to sell it, he took the engine off 106.000067 and put it on 106.000076. At the same time, the collector Edoardo Tenconi recovered the chassis of 106.000067 and kept it for many years planning the restoration, which unfortunately never took place. In June 2016, the car with chassis 106.000067 becomes the property of the current owner along with engine number 104,000*000150*. At the end of 2016 the car was equipped again with the original 104.000*000115* engine, returning to being a matching number. A complete restoration by the Salami Scuderia begins in 2017.