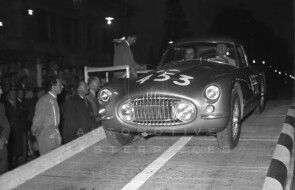 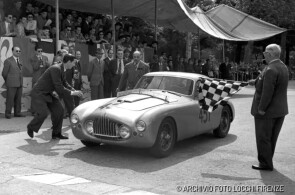 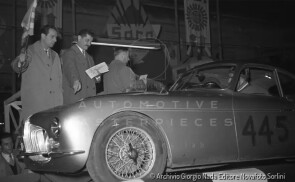 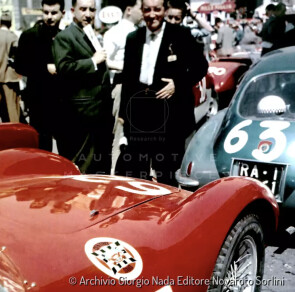 Chassis 106.000004 is the fourth car built in a series of six pre-production prototypes with an art deco grill that extended into the hood. It is the fourth of 34 first series 8V and one of only three cars entered in 1952 Mille Miglia by Supremo Montanari from Ravenna, the first owner of the car. He damaged his car during the rainy 1952 Mile Miglia, finishing off street more or less 5 minutes after leaving the ramp. Probably, FIAT was not yet tooled-up to rebuild Montanari's car, so he had to find a coachbuilder. The car was completely rebuild following the original Rapi-lines probably by Motto and used some of the original parts like the art-deco grille and engine hood. Also the inside was changed with different instruments. The car appeared with this new shape at the 1952 Circuito Automobilistico di Senigallia and at the 1953 Mille Miglia in a two tone green paint and with a full-width bug deflector. It finished 23rd overall. It come back to Mille Miglia in 1954 and 1955, when the car showed a modified grille and, just above it, two slender extra air intakes. The car ran several races until 1956 such as the Giro dell’Umbria, Coppa d’Oro delle Dolomiti and the Bologna San Luca.