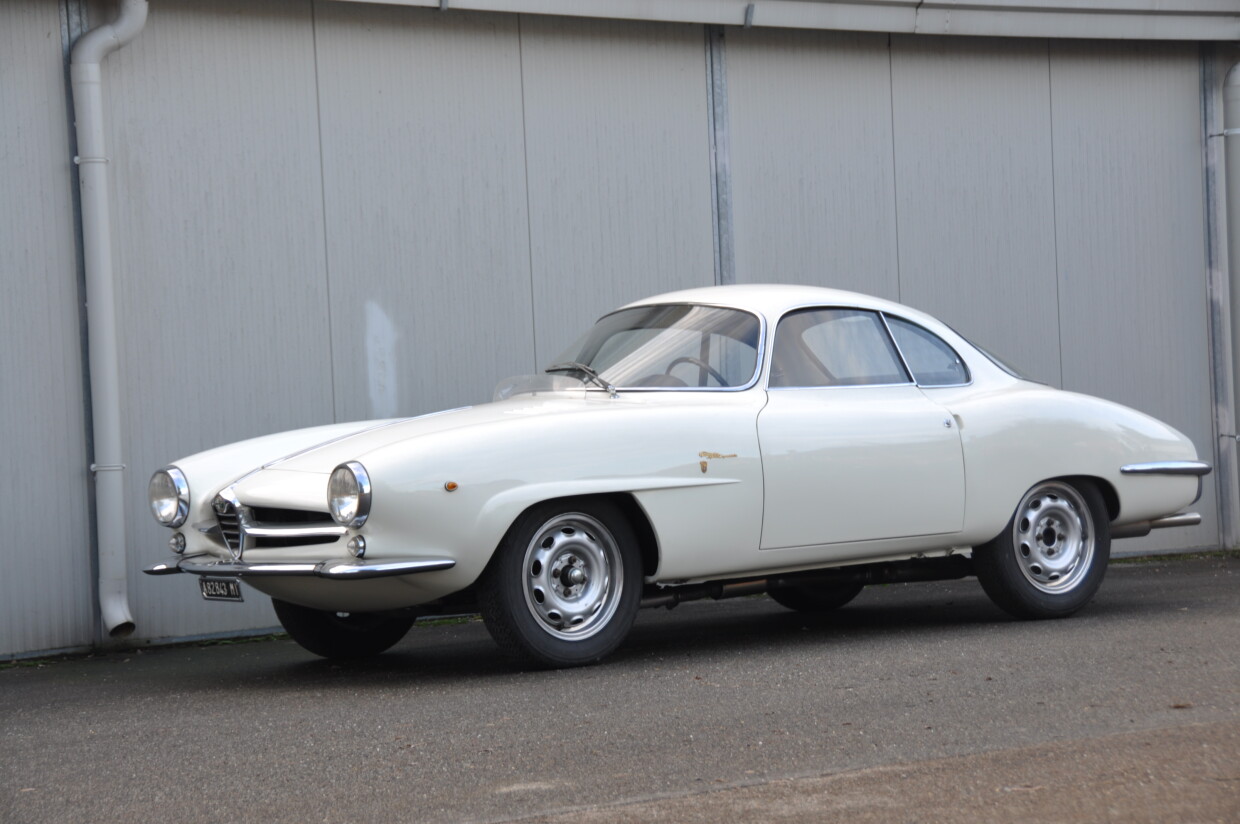 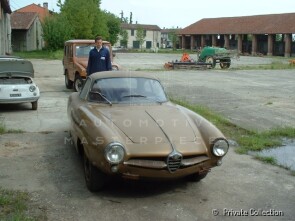 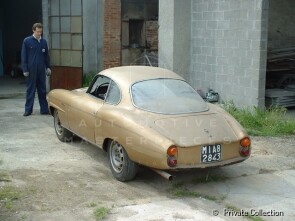 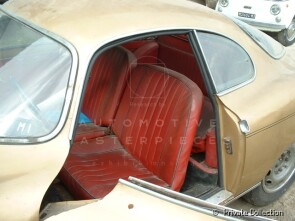 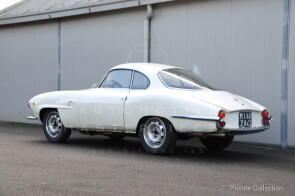 Share on
Owner ALFA BLUE TEAM (IT)
Restored to its pristine conditions, this car counts as first owner Giuseppe Luraghi, the legendary Alfa Romeo president and the father of the Giulietta model.

Restored to its pristine conditions, this car counts as first owner Giuseppe Luraghi, the legendary Alfa Romeo president and the father of the Giulietta model.The post-war economic development urged the automotive industry: the mass motorization began and the “artisan” dimensions and settings had to leave space to the logic of the “assembly line” on a large scale, to face the customers’ requests. For Alfa Romeo this delicate passage coincides with the design and construction of the “Giulietta” model. That was born first as a coupe and then as a sedan! The Giulietta, internally referred to as “Type 750”, underwent technical problems that slowed the beginning of the production, compared to the scheduled presentation at the Turin Motor Show in 1954. The production of the car was financed by a public subscription of capital and tied to a national lottery that was giving away a car: the launch could not be procrastinated. For this reason, at the end of 1953, Alfa Romeo took the unusual decision to present the coupé model before the sedan. The sporting version was designed to strengthen the link between the new model and the brand tradition in competitions. The original company program was to set it up on the sedan’s mechanics and put on sale it later, with a limited production by Milan coachbuilders. The design and development of the coupé was completed together with the sedan. The prototype created by Giuseppe Scarnati, later became famous as the “brutto anatroccolo” (ugly duckling). Body shops like Zagato and Touring were unavailable as they were already saturated with other Alfa Romeo models. In charge of the Giulietta project, Rudolf Hruska asked for the help of Mario Boano, manager of Ghia and Bertone and enlisted Giovanni Michelotti as a consultant. Franco Scaglione and a very young Giorgetto Giugiaro also worked on the refinement work, mainly carried out by Boano. The countless changes, while respecting the original volumes, made the body pleasant and balanced. This is how the Giulietta Sprint was born, presented as a pre-series prototype at the Turin Motor Show on 19 March 1954. As usual, the “small” 1,300 cc engine was a twin-camshaft with overhead cams and its rumblewas that of an Alfa! The success of the new model was such that Alfa Romeo immediately had to revise its production programs. The Carrozzeria Bertone had to cope with the unexpected orders of Alfa Romeo, subcontracting the construction of the bodywork to sheet-metal artisans in Turin. In 1960 began the automated production of molding of the shells, hand-made until then. The construction of the Giulietta Sprint took place in Turin for the bodies, then they were sent to Milan at the Portello with car transporters, where they were completed by the engine, the mechanical parts and all the interiors. The Sprint engine, thanks to a higher compression ratio than the sedan and a double-barrel carburetor reached 65 horses and the car thus reached 160 km/h. The body lines and the price of Lit. 1.900.000 contributed to the success. The price, not in absolute terms, was however much lower than the one of the older sister 1900 Super Sprint. It was sold only in four colors: Rosso Alfa, Blu Tornado, Bianco Gardenia and Azzurro Capri. It made his racing debut at the Giro di Sicilia in 1955 and from there his presence spread in all the biggest competitions of the time. The operation of fitting the Giulietta Sprint in a more popular band was very successful. The Giulietta sedan will arrive in the spring of 1955, while in the fall, at the Frankfurt Motor Show, the Spider will see the light. The sales figures of the Giulietta range immediately reached significant values: from 12 units built in 1954, it passed to 1,415 in 1955 and to 1,855 in 1956. The price of the Sprint will rise slightly and the car will receive continuous updates, including: a different gearbox with Porsche synchronizers in place of the Borg-Warner. The construction was then unified to the Sprint Veloce. Between alternating events, the Sprint came out of the price list only in 1966. About 28,000 cars were built in total. Just in time for the Mille Miglia of 1956, the Sprint was backed up by the Veloce, a model distinguished for its increased power and its lightened weight; the windows of the car opened length-wise, becoming a distinctive external element of the car. Starting in 1956, the Alfa Romeo Giulietta Sprint Veloce participated to a continuous racing season as a result of some significant technical improvements compared to the normal Sprint model: the small 1.3 litre four cylinders engine was increased in power from 80 to 90 hp, thanks also to the use of two twin barrel horizontal carburettors. With a top speed of 180 kph, the Sprint Veloce became the dream of many sporting gentleman-drivers. In a Sprint Veloce, Sgorbati took an exceptional eleventh place in overall ranking in 1956 Mille Miglia. In 1957, 700 units were built.

At the 1957 Turin Auto Salon, Alfa Romeo presented the Giulietta Sprint Speciale in prototype form. It was born from a study of a faster version of the Giulietta Sprint, during which in-depth aerodynamic research was carried out in order to enable the little engine Alfa Romeo to break the 200 Km/h barrier. The model went into production in 1959 embodying a number of styling updates and improvements and was offered as a more luxurious version of the popular Giulietta, as it was created with lightweight construction and competition in mind. It was designed after Franco Scaglione’s three futuristic B.A.T. show cars. It was modeled by Carrozzeria Bertone and featured striking high fenders and a rounded roofline. The forward-thinking aerodynamic design boasts a drag coefficient of only 0.29 Built on a slightly shorter wheelbase than the standard Sprint, the curvaceous ‘SS’ was powered by a 1.3-liter, Veloce-specification twin-cam engine, which had twin two-barrel Weber carburetors and offered 116 horsepower. Between 1957 and 1962, just 1,366 examples were produced.

This example was delivered new in Italy to its first owner Giuseppe Eugenio Luraghi (1905-1991), the legendary Alfa Romeo-president, a manager who played a prominent role in the Italian corporate system for more than half a century, from the late 1920s to the mid-1980s. He covered prestigious positions from 1932 to 1950 in Pirelli and its subsidiaries. He became for a short time deputy CEO of SIP (the telephone company controlled by the big state-owned holding Iri) then in 1952 he became CEO of Finmeccanica, Iri’s sub-holding for mechanical industry, devoting special attention to Alfa Romeo and the business plan for the manufacture of "Giulietta". In 1960 he returned to the Iri group as chairman of Alfa Romeo and bought this car. Luraghi turned the company to mass-producing small vehicles rather then taylor-made luxury models. In the 1960s and 1970s Alfa Romeo produced a number of successful sporty cars. In 1971 the company, that was headquartered in Milan, opened a new factory near Naples (Alfasud) which enabled it to increase production from 200,000 to 300,000 cars a year by 1973. In the final years of his managerial career, Luraghi served as deputy chairman of the mechanical engineer company Necchi (1974–1979), chairman of the publishing house Mondadori (1977–1982), and deputy chairman of the textile company Marzotto (1979–1985).