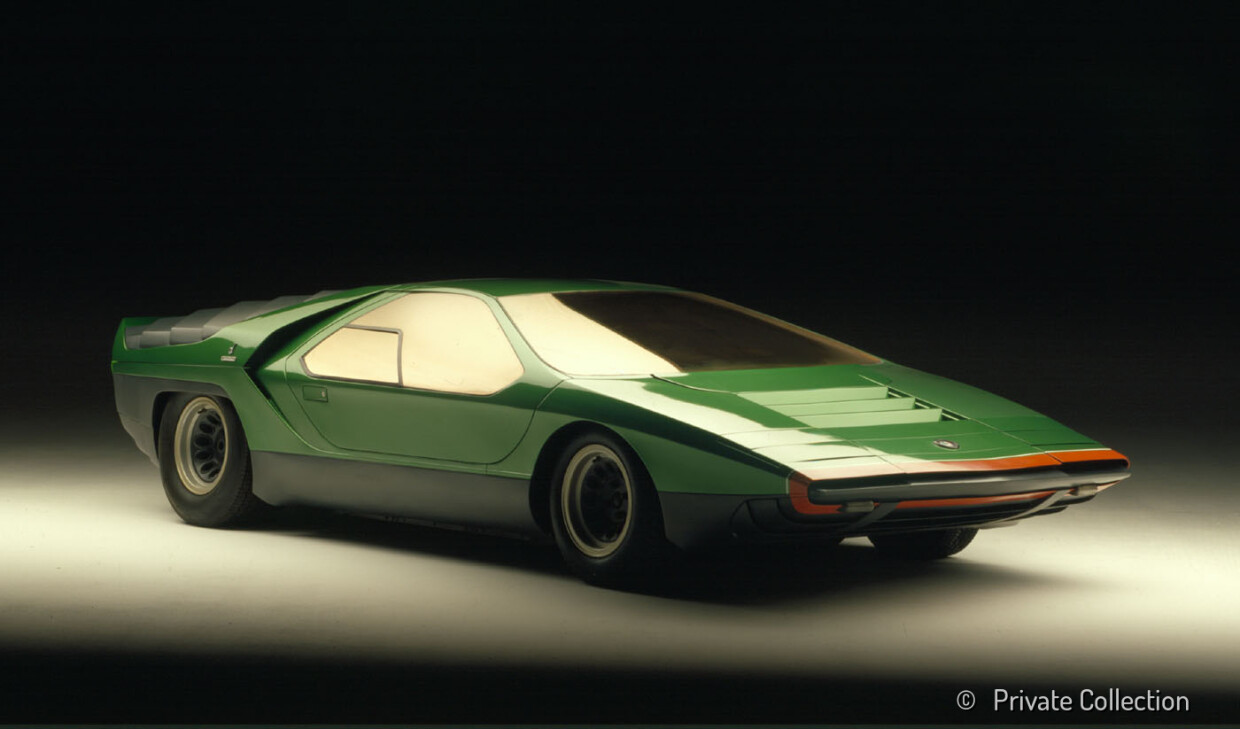 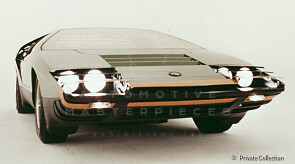 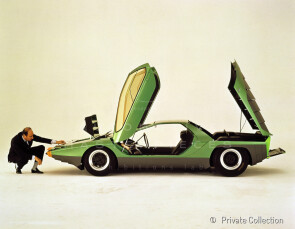 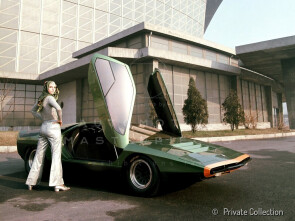 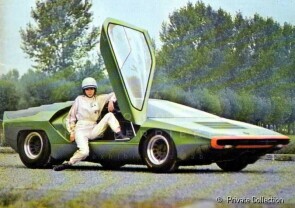 Share on
Owner MUSEO ALFA ROMEO (IT)
Based on the Alfa Romeo 33, the Carabo was one of the very first wedge shape designs that would go on dominating the 1970s. It's a creation of Marcello Gandini.

In 1967 a road version of the "Tipo 33" was launched, the Alfa Romeo 33 Stradale, designed by Carlo Chiti's Autodelta and built by Carrozzeria Marazzi based on a design by Franco Scaglione in just eighteen units. This car inherited the 1,995 cm³ V8 engine from racing cars, albeit weakened to 245 hp at 8,800 rpm to improve delivery, and the H-frame, albeit lengthened to improve comfort. Of the 18 chassis made, it seems that only 12 were actually finished and only 11 sold to customers while on the basis of the last 6 the best Italian coachbuilders created a series of concept cars, in particular Pininfarina built the Roadster in 1968, in 1969 the Coupé Prototipo Speciale, designed by Leonardo Fioravanti, and in 1971 the Cuneo, by Paolo Martin; Bertone built Carabo in 1968 and Navajo in 1976, both by Marcello Gandini, while Italdesign by Giorgetto Giugiaro created the Iguana in 1969. All concept cars bear the Alfa Romeo brand and name and are now on display at the Alfa Romeo Historical Museum.

The Alfa Romeo 33 Bertone Carabo, also known as Alfa Romeo 33 Carabo or Bertone Carabo, is a dream car made by Alfa Romeo and Bertone coachbuilder in 1968. This car is the first of 6 dream cars based on the chassis of the Alfa Romeo 33 Stradale made by the most famous Italian coachbuilders at the turn of the 60s and 70s. The name Carabo derives from the beetle Carabus Auratus, of the Carabidae family, characterized by metallic and bright colors, and it is precisely with the colors (luminescent green with orange details and golden glass) and the vertical doors, which recall the elytra, of this insect that the coupé was exhibited at the Paris motor show in October 1968. The squared line of the fiberglass bodywork, designed with a wedge profile by Marcello Gandini and built by Bertone in just 10 weeks, is a design milestone automotive because it introduced square lines; in fact, it lays the foundations for many other hugely successful cars; in particular the Lancia Stratos Zero concept car and above all the Lamborghini Countach, also designed by Gandini for Bertone. The very sharp front is characterized by a metallic orange stripe that runs along the entire edge of the front, by a very thin black bumper, by the Alfa Romeo logo crowned by a black plastic ring and by the retractable headlights behind three adjustable tiles that when closed they integrate perfectly into the bodywork. In the center of the hood there are three vents for hot air from the radiator. The side profile is an almost perfect wedge that accentuates the car's low ground clearance, just 990 mm, separated into two chromatic halves, metallic green and black. Another of the innovative features of the Carabo are the mirrored gilded VHR crystals and the "scissor" doors that open vertically thanks to a gas piston, fitted for the first time on this car and then taken up on other concept cars and production cars, such as the Lamborghini Countach. The rear hood which incorporates the Bertone logo, the engine air intake and the rear spoiler is covered by a fixed shutter formed by six black plastic strips that allow the hot air of the engine to be vented and also allow a (limited) rear visibility. The rear mirror (truncated), of a brighter green than that of the bodywork, is dominated by a geometric panel in which the rear lights are incorporated and under which there are five black plastic elements that act as bumpers. Above it is also applied the identifying inscription with a particular handwriting: a small replica of the profile of the car with the door open with a special character every letter that makes up the word "Carabo". The interior is very simple with two sports seats and a dashboard; at the two opposite ends are placed speedometer and tachometer, while in the center are collected the secondary indicators. Very peculiar is the black two-spoke calyx steering wheel with the very depressed hub. The dream car, according to data declared by Bertone, was capable of reaching a top speed of 260 km/h and could accelerate from 0 to 100 km / h in 6.5 seconds. Originally, the prototype was equipped with the same 1,995 cm³ double-ignition V8 engine as the Alfa Romeo 33 Stradale, capable of delivering 230 hp at 8,800 rpm, placed in a central position and coupled to a 6 gears manual gearbox. On unknown date and for unknown reasons the original engine was replaced with the 2,593 cm³ 200 hp V8 built in series for AR Montreal. After the usual tour of the salons, the prototype, which remained unique, provided the inspiration for Marcello Gandini and Bertone to build other famous cars. Both the overall line and the scissor doors, later taken up by almost all future Lamborghinis, of the 1974 Lamborghini Countach derive strictly from the 1968 Carabo. Finally, in 1976 the Alfa Romeo-Bertone pairing worked together again on the chassis. of the Alfa Romeo 33 Stradale creating the Navajo, the last dream car in the series of 6 also made by other Italian coachbuilders, currently all kept together in the Alfa Romeo Historical Museum in Arese.