O.S.C.A.'s first automobile was the MT4, for Maserati Tipo 4 cilindri. Maserati brothers' goal was to develop an automobile to compete in the 1100 cc racing class. The choice of a small displacement was due to financial reasons and Ernesto Maserati is solely responsible for conception and design. Over the next eight years the MT4 was developed into the most successful under-1500 cc sports/racing car in the world. Tested by the same Ernesto, the car made its racing debut in September 1948 driven by Gigi Villoresi who, against racers and cars of the highest level brought the small O.S.C.A. to victory. A young Veronese, Giulio Cabianca, bought an OSCA 1100. He began a very long series of successes and, then, more and more drivers will be driving an Osca. Of the around 200 O.S.C.A. cars produced, perhaps 80 were MT4s. 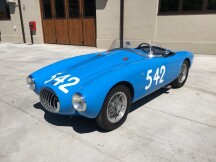