Filippo Surace. In 1956 he was at Alfa Romeo as an experimental technician specializing in the development of new-concept petrol engines. In 1958 he became assistant of Garcea, appointed head of the new research center wanted by Satta Puliga. His task: theoretical research. Surace has the merit of having introduced computers to Alfa Romeo. In 1967 he became responsible for research and theoretical and experimental development for the entire company. In 1976, two years after Sarta Puliga's death, Surace inherits his position as chief engineer of the whole company: he will be the technical director general for research and development for nine years, ending up being a bit of the father of the Alfa 33, diesel, 90 and 75. 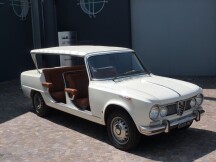