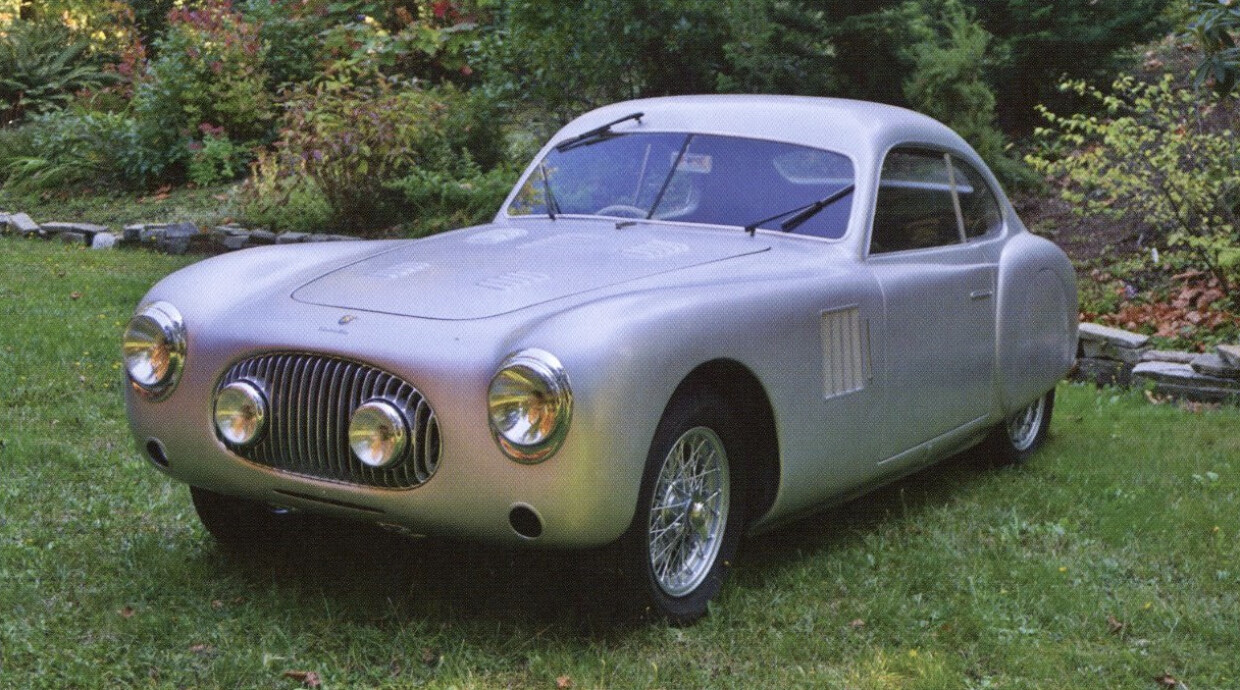 Share on
Owner Private collection
It is one of three special “Corsa” coupes prepared for the Mille Miglia and Targa Florio races in 1948. Different from the later production cars in many ways.

Cisitalia chassis no. 066 is one of three special “Corsa” coupes prepared for the Mille Miglia and Targa Florio races in 1948. Dante Giacosa, who helped Piero Dusio start Cisitalia, states in his autobiography “I miei 40 anni di progettazione alla Fiat” that these cars were the prototypes of the later 202 coupe, and built by Stabilimenti Farina. These early cars have a chassis tag that reads “TIPO D46 SPORT,” being an evolution of the D46 “monoposto” racing cars to “biposto” configuration. After production increased, the tags were changed to “TIPO 202” on the later coupes. It is theorized that about 65 chassis numbers were pre-allocated for production cars, primarily by Pinin Farina, so the next available chassis numbers, 066 and 067, were used as “Squadra Piero Dusio” factory team cars for the 1948 race season. Cisitalia chassis no. 066 (together with its “sisters” Corsa coupes) is different from the later production cars in many ways, for example the inverted arch tube in the lower door sills was not yet present, which was added on later cars for extra strength. Many weight saving measures were applied, and official factory documents report a weight of only 727 kg without fuel. There are no coachbuilder body panel stampings on 066, but as noted above, Giacosa states that it was built by Stabilimenti Farina, and period photos show chassis no. 066 in front of that coachbuilder’s factory. Also the third Corsa coupe (chassis no. 007) was reportedly build by Pinin Farina. Cisitalia chassis no. 066, like the other Corsa coupes had special features such as: driving lights in the grill; a third windshield wiper; vertical “shark” gill type side vents; hood louvers; an air vent hole in the rear window; air inlets below the headlights to allow cooling of the brakes; rear vents to duct air out of the cabin; no rear trunk (the spare tire mounts behind the seats); no tail lights, except for license plate banana lights; rear wheel spats. The first big race for the chassis no. 066 was the 32nd Targa Florio held on April 3-4, 1948. It was combined with the 8th Giro di Sicilia, since the race was run around the perimeter of Sicily, a distance of 1080 km. According to Count Giovani Lurani the course had about 11,000 corners! This twisty course allowed the Cisitalia 202 Corsa chassis 066 with engine 206MM, driven by Macchieraldo to finish 3rd overall, while chassis 067 with engine 207MM was 2nd and both close behind the Ferrari 166 S of Bonetto and Troubetzkoy. Note that at this time none of the cars had vent louvers in their hoods. The next major race of the Cisitalia 202 Corsa was the XV Mille Miglia run on May 2, 1948, but only one of the three Corsa coupes finished, chassis 067 taking 5th place overall. Cisitalia factory racing documents state that 066, again with Macchieraldo (and fitted with engine 200MM), retired in Rome from a broken connecting rod bolt. The motors were swapped around, since after the Targa Florio they were likely rebuilt and there was little concern as to what car they went back into. The hood vent louvers were added at this time for cooling the engines, which reportedly generated a surprising amount of heat for only 1100cc displacement. After the 1948 Mille Miglia chassis no. 066 was sold by the factory with engine 207MM. From John de Boer’s research it appears that the car went to France and was painted blue. Later, the car was exported to the U.S.A., where it was listed for sale and had several changes of ownership and a fairly troubled life, at one point losing the engine as well. Until it ended up in the hands of the current owner who restored it, even managing to reunite the chassis with the matching 207MM engine.