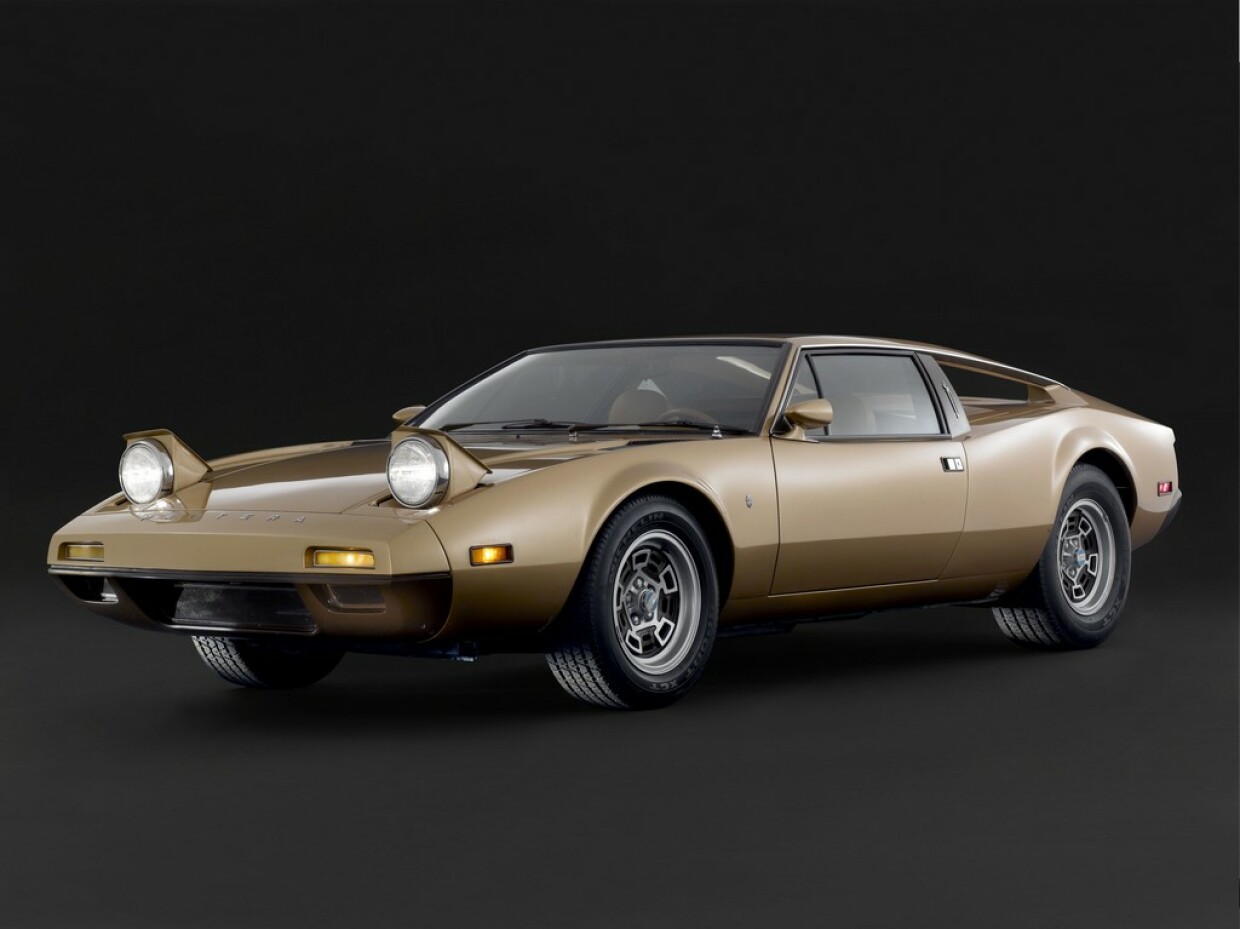 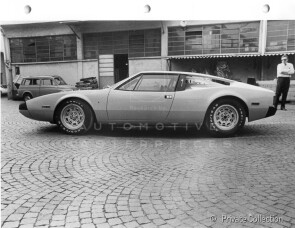 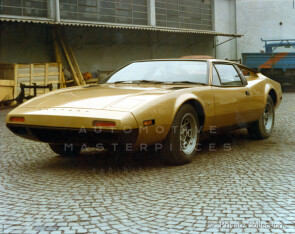 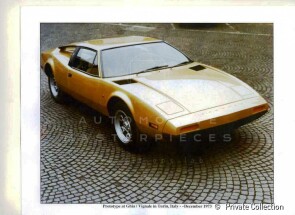 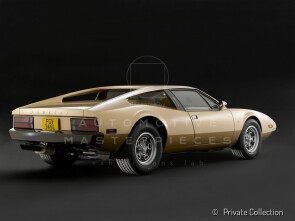 Share on
Owner Corrado Lopresto (IT)
One-off designed by Tom Tjaarda as a prototype and showcar. It should be a replacement for the Pantera. Often changing name, now restored to pristine conditions.

The "Pantera" was born in the months between 1969 and 1970, at the urging of Ford, who wanted to market a high-performance mid-engine car to achieve the double result of commercially exploiting the sporting successes obtained with the GT 40 in Europe and counter the success achieved by the Corvette (of General Motors production) on the US market. The creation of the car was entrusted to a young Emilian company, De Tomaso, which created the prototype by reworking the technical scheme already tested on the "Mangusta", with bodywork designed by Tom Tjaarda. Assembled in the Vignale bodywork factories, owned by De Tomaso at the time, the "Pantera" is a two-seater coupé with a central engine with a very sporty setting. Marketing began in the spring of 1971. The technical staff of the Modena company, led by Gianpaolo Dallara, abandoned the expensive central beam chassis of the "Mangusta" and chose the more economical solution of the monocoque bodywork for the "Pantera", as Ford wanted to sell the car at a lower competitive price and needed a high production rate, incompatible with the artisanal construction process of trellis frames. The engine is the Ford Cleveland 351 V8 of 5763 cc (equal to 351 c.i.) which, powered by a large Holley four-barrel carburettor, delivers 330 hp. In relation to the general layout of the car, the other solutions are typical: rear-wheel drive, double wishbone suspension (both front and rear), self-ventilated disc brakes, ZF synchronized 5-speed manual gearbox and limited-slip differential. The Pantera, exported to the United States directly by Ford (which sold it through the Mercury network) was a good success. In August 1972, the standard version was joined by the Pantera L, with oversized black bumpers (to comply with the new legislation which required impact tests at 8 km/h without suffering damage) and more refined equipment. The first series of the Pantera was produced until 1993 in 7,258 units.

The De Tomaso Pantera II (also: De Tomaso Pantera 7x, De Tomaso Montella, De Tomaso Monttella) is a roadworthy prototype of the Italian sports car manufacturer De Tomaso. Conceived in 1973 as an up-to date version of the Pantera L, the 7X Pantera II took up the technical and styling peculiarities of the Pantera L though did not maintain any of its bodywork panels, except for the doors. The car, designed by Tom Tjaarda at the initiative of Don DeLa Rossa, at the time chairman of Ghia S.p.A., was assembled by hand at Vignale workshop (which Ghia had acquired in 1969) aiming at re-proposing the well-known supercar in the US market from May 1974, when the Pantera operation was transferred by Ford to De Tomaso. Tjaarda’s design was formally independent, but followed the layout of the Pantera, whose body shell remained essentially unchanged. For the Pantera II, De Tomaso adopted the essential design features of the Pantera. Drive and chassis were completely the same; like the production model, the Pantera II also had a Ford 5.7 liter (5,763 cc or 5,769 cc) eight-cylinder V-engine. The body shell, the glazing and the interior were also carried over. However, the front end and the flanks of the car were designed to be smoother; the striking angles of the first Pantera were eliminated. A striking design feature were the free-standing, non-glazed struts that connected the roof section to the rear end. Tom Tjaarda quoted the rear design of the Maserati Merak designed by Giorgetto Giugiaro. The front safety bumpers were integrated into the body, the rear ones were attached. Ghia handcrafted a roadworthy prototype of the model using Pantera technology. In doing so, consideration was also given to the forthcoming new safety regulations and the stricter emission regulations that should come in California in 1975. The plan was therefore to install the 400 c.i. engine (6.6-liter engine) that had been converted to the new standard. In the spring of 1974, the bronze-colored livery car was shown at shows such as the Detroit Auto Show, Chicago Auto Show and Los Angeles under the designations Pantera II or Pantera 7x (7x was and is seen as a symbol on the B-pillars of the vehicle). In the months that followed, Ford and De Tomaso ended their connection. The main trigger was the decline in sales due to the oil crisis. Ford ended sales of the Pantera in the late summer of 1974. Since De Tomaso had made numerous bodies for the sports car in stock, the Pantera could not be replaced for the time being. First the prepared Panteras should be completed and sold, which lasted until 1976. The prototype Pantera 7X was bought by Don De La Rossa itself, who supervised the "conversion" of the "Pantera II 7x" to "Montella" road car as follows: added rubber strip around belting, added hood vent to allow radiator hot air to exit, added side mirrors, repainted car in pearl white over metallic bronze For the renaming, the car had the Pantera lettering removed from the front bumper and the rear hood and got two Monttella 5.7 lettering on each side just behind the doors. The 7x symbols remained on the B-pillars. De Tomaso was hoping that another company would be interested in marketing the car. It didn't come to that. It was sold to the Sport Cart Exchange, Birmingham, Michigan in 1980. In January 1981, it passed to Frederick T. Hamm for USD 38,000, who bequeathed it to his heirs in July 2006, when the car's total covered distance was about 30,000 km. The Ford 351C V8 5.7-litre engine underwent some improvements (timing system, fuel supply and exhaust) if compared with the standard version Pantera produced. In 2007, the car was auctioned off at RM Sotheby's Monterey Sports & Classic Car auction as the De Tomaso Montella for $99,000 to the Italian collector Corrado Lopresto. He restored the coupe with the help of Tom Tjaarda to De Tomaso Pantera II specs. The first presentation of the prototype was in 2008 at the Concorso d'Eleganza Villa d'Este. The vehicle has a two-line plaque on the rear right of the hood with the inscription: De Tomaso Monttella - Torino, Italia 1/1. A few words on the (complicated) question of the name: the name Pantera is the Italian word for panther. 2 or II stands for the second and further developed version of the Pantera. The meaning of the designation 7x or 7X is assumed to stand for the not yet known production year 197x. An official statement could not be found so far. Although the vehicle was later called Monttella (with a double T) in 1975, the name Montella (with just a T) has also spread. Even the auction house RM Sotheby's calls the coupe Montella on their website. The meaning of the name is currently unknown.