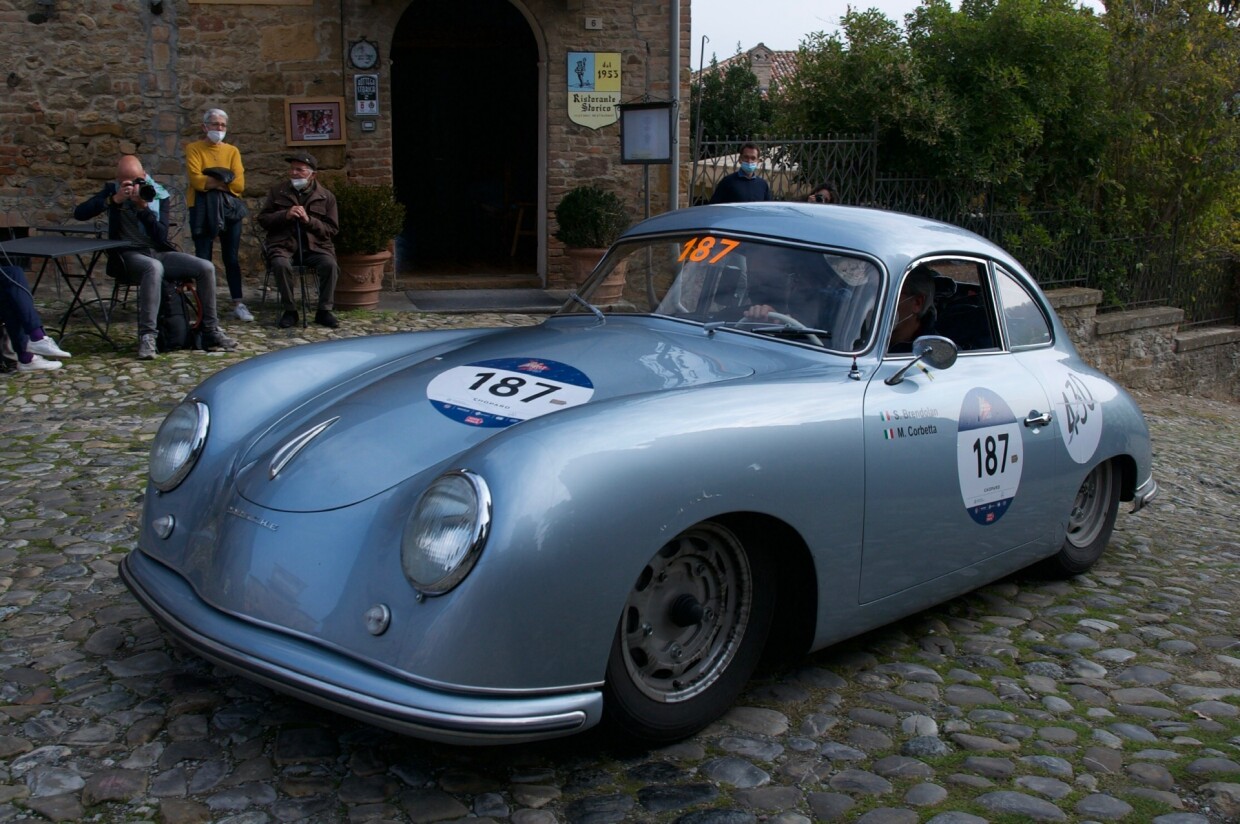 Share on
Owner Private collection
It results to be the first chassis of 356 equipped with the one-piece bent-window windscreen. Participated in the 1953 Mille Miglia with Italo Sancilio and Fritz Esslinger.

According to Porsche 356 Registry, chassis 11361 is the first chassis with bent-window instead of split-window.

In the words of Ferry Porsche: “… I saw that if you had enough power in a small car it is nicer to drive than if you have a big car which is also overpowered. And it is more fun. On this basic idea we started the first Porsche prototype.”

The 356 was created by Ferdinand "Ferry" Porsche (son of the Ferdinand founder of the German company), who founded the Austrian company. Like the Volkswagen Beetle designed by Ferdinand Porsche Sr., the 356 was a four-cylinder, air-cooled, rear-engine, rear-wheel drive car with unified pan and body construction. The chassis was a completely new design as was the 356's body which was designed by Porsche employee Erwin Komenda, while certain mechanical components including the engine case and some suspension components were based on and initially sourced from Volkswagen. The 356 was a luxury sports car and Porsche's first production automobile. Engineering innovations continued over the years of its manufacture, contributing to its motorsports success and popularity. Production started in 1948 at Gmünd, Austria, where approximately 50 cars were built. On June 8, 1948, the first Porsche car obtained its approval: it was the Porsche 356/1 Roadster this was followed by the 356/2 in 1950. In 1950 the factory was moved to Zuffenhausen, Germany, and at this point we have the first 356 also called , retrospectively, "Pre-A". Initially only 1100 cc, then 1300cc and from 1952 also 1500 cc, they were easily recognizable from the windshield divided into two parts by a central rib. All were also available as convertibles (Cabriolet, Speedster and then Roadster).

The 356 1500 cc, so-called "Pre A", produced between 1953 and 1955, differ from the previous one by a series of characteristics. The bumpers are removed from the bodywork. The windshield is now a single centrally curved pane (Knickscheibe). The handle on the luggage compartment lid is elongated and fitted with a slit and, from 1954, with a Porsche frieze. The rear lights become round. The rear blinkers, which are also round, are close to the rear lights. The front blinkers are round and flat, and from 1954 integrated into the horn grille. The stop light is integrated into the rear light unit. The license plate illumination is in a chrome housing above the license plate.

The engine is type 546/2, rear longitudinal mounted, 4 cylinders boxer, air cooled, it has a displacement of 1,488 cc and is powered by two Solex 32 PBI carburetors. The distribution is single-shaft with rods and rocker arms and overhead valves. The compression of 7:1 gives a power of 55hp at 4,400 rpm. The chassis is platform, the suspensions are longitudinal oscillating arms and transverse torsion bars. Rear suspension with oscillating axles and longitudinal arms. Worm and sector steering. Drum brakes. Rear, obviously, wheel drive. The clutch is dry single-disc and the gearbox (type 519) is 4 speed mechanical. The weight of about 830 kg for a length of just under 4m.

Porsche 356 1500 S (Reutter), chassis no. 11361, was built in 1952, has all the features of the first 356, built later than the semi-handbuilt "Gmünd" but before the 356 A model and, therefore, defined retrospectively as "Pre-A". According to the “Porsche 356 Registry” chassis no. 11361 is an important chassis number, since it is the first equipped with the one-piece bent-window windscreen; all previous models had been equipped with a two pieces split windscreen.The car has a short but significant sports history. In fact, it appears to have participated in the 1953 Mille Miglia. The Porsche 356 model boasts an assiduous presence at the Mille Miglia. In 1952, the first year of production, a 1500 car was brought to the race by Giovanni Lurani, finishing 46thoverall. The following year, a Super 1500 was brought to the race by the official Porsche team with Hans Hermann. Chassis no. 11361 participated in 1953 with racing number 430 for the colors of the Scuderia Japigia in Bari. It can be considered a semi-works car, as it was driven by Italo Sancilio, a character very close to the parent company, together with the German Fritz Esslinger, a Porsche man. Italo Sancilio was an Apulian racing driver, originally from Molfetta where he was born on 7 September 1916. He initially engaged in regional races and in particular at Fasano-Selva. Then tried more challenging comparisons. He is still remembered today by his adventurous participation, with the colors of the Japigia team, in the XX Mille Miglia of 1950. That year Sancilio came to the start with the silver Porsche 1500 Superchassis no. 11361. Sancilio bought the car, a rarity at the time, in Turin, where he had gone to see the Salone dell’Automobile, negotiating the purchase at the stand of the German house and expressly including in the price a special preparation, to have good results in the Brescia race. At the same time he did not want to give up elegance so he also required special interiors in red pigskin. In fact, the car with chassis no. 11361, one of the very first built, was brought back to Stuttgart where it was set up in the required way. However, Porsche wanted to do more and offered Sancilio, as co-driver, its own engineer, Fritz Esslinger, thus making the car, somehow, “official”. The two set off at great speed from Brescia, in Ravenna they were already well placed: eighty-ninth overall out of 488 members. In the second stretch, from Ravenna to Pescara, Esslinger took over driving, but it took too much enthusiasm. In Forlì he took a wrong turn, skidded and crashed into a telegraph pole. Result: car destroyed, race over, damage to the astonished Sancilio who, after losing his car, was forced to pay, extreme mockery, even the knocked down telegraph pole.