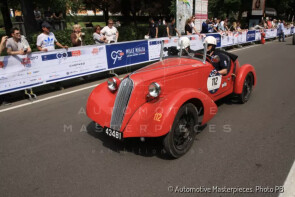 Share on
Owner Private collection
The car raced the Mille Miglia in 1935. At a certain moment of its history, the body shape was heavily modified by an unknown builder for an unknown reason.

Fiat 508CS Balilla Coppa d'Oro with chassis no. 508S043481 took part in the Mille Miglia in 1935 with race number 12 and was driven by Umberto Vernassa (owner) and his co-driver Carlo di Vecchio. Sadly, the Balilla withdrawn before the finish. At a certain moment after the race the body shape of the car was heavily modified. The stories of racing cars are studded with frequent changes for the most varied reasons; modifications are typically made to increase competitiveness, lighten, improve aerodynamics, etc. But just as often the changes follow damage, more or less serious, which the car suffers in the race. This modified shape on the Fiat 508 S, chassis no. 508S043481, is the work of an unknown builder undertaken for an unknown reason.