The "Santa Gorizia" circuit was a car race organized in the years 1949, 1950, 1954 and 1955 by the Automobile Club Gorizia. The first 1949 edition, initially called "City of Gorizia Speed Circuit" saw the racers engaged on a 2.5 km route that wound along the city streets. In the following three editions the event changed its name to "Santa Gorizia". Also the route was remodulated reaching a total length of 4 km. 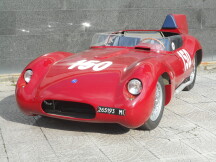