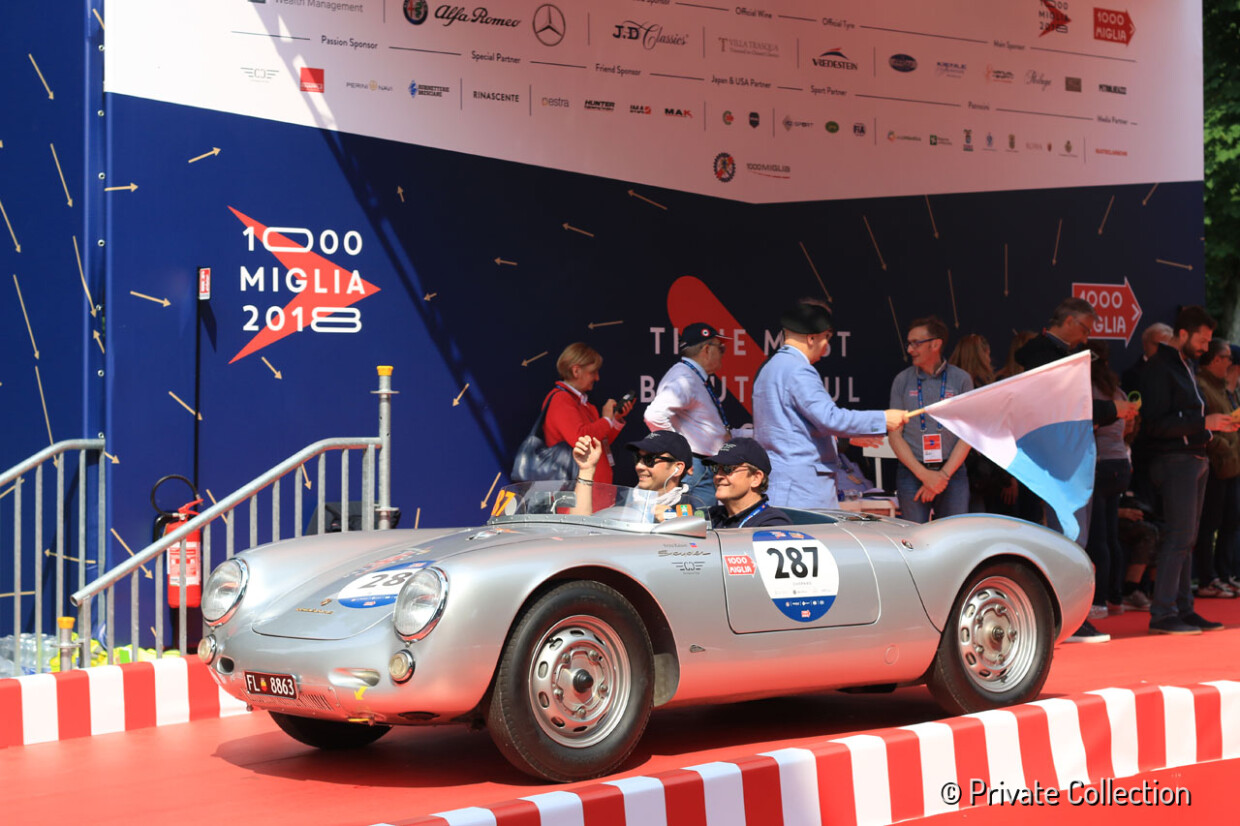 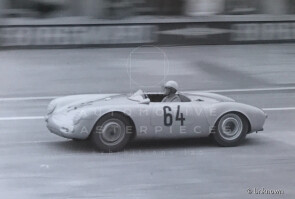 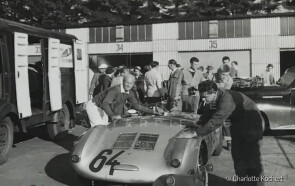 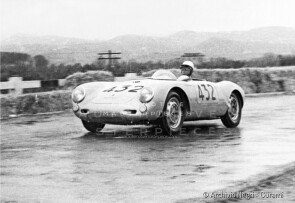 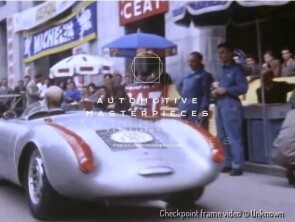 Share on
Owner Private collection
550-0084 with gentleman driver Gotfrid Köchert at the wheel was 1st in class at 1956 Nürburgring Grand Prix of Germany. Stunning at the Mille Miglia, same year.

16th January 1957 Checkpoint (UK) Checkpoint is a 1956 British movie. The genre can be defined as a noir, a crime or a drama, it was directed by Ralph Thomas and starring Anthony Steel, Odile Versois, Stanley Baker, and James Robertson Justice. The film was shot at Pinewood Studios in London with locations in Italy, including footage of the 1956 Mille Miglia. The 550-0084 appears in the race with the no. 432

The Porsche Spider type 550-1500RS, introduced at the 1953 Paris Auto Show, is one of the best reknown icons of a race car. Born from an ideal merge between the famed Ferry Porsche’s 356 and the prototypes built and raced by Walter Glöckler in early 50’s, it was born to race and purposely built in only 90 cars. The 550 had a 1500cc 4 cam flat four engine. Designed by the Austrian Dr. Fuhrmann, it was extremely complex but really effective when set up. It was mounted right behind the driver, with a transaxle transmission, so weights were far better distributed than in the 356 model. 4 finned drums on each corner to brake the thing, as usual at the time. The suspensions too were tipically Porsche of the era, but connected to a steel tube ladder frame. This way, light and rigid, the car was the basis of the evolution from 1956 with the 550A and the 645 to, later, the 718, bringing Porsche to even more success. The model 550 was, first of all, real low and really light: the center of gravity and the power to weight ratio were outstanding and these were the keys to make of the car “a giant killer”, as they nicknamed. A famous story tells about the German Formula One racer Hans Herrmann driving it under closed railroad crossing gates during the 1954 Mille Miglia. The first victory came right in 1953. From that day things evolved suddenly: in the the next couple of years, the Werks Porsche team raced the 550 with outstanding success. The 550 Spyder was a constant winner, usually finishing in the top three in its class. A plus for a model, whose production was of 90 cars only. A total of 130 cars including the one-off 645 and the 550A, and a total of 196, including also the 718. Another peculiar feature of the 550 was that it could be driven to the track, raced and then driven home: it was really both a road and track car. While each Spyder was individually designed and customized, there were often lots of them on each race. So, a reknown detail were the differently painted tail fin-tails along the rear fenders to help recognizing the cars from the pits, in the days when cars were often silver painted, Germany’s official colour. Another interesting note: Porsche was the first car manufacturer to get race sponsorship on their cars. While the main production of Porsche in that days (the 356 model) was bodied by Reutter, the bodywork of the 550 was crafted at Wendler Karosserie in Reutlingen. Like most coach builders, Wendler started as a carriage builder in late XIX century and after WWII it become skilled in the “new” Ponton bodyworks. The 550 is the apex of the Karosserie story. The fame of the 550 has a dark side too. And this dark side has a nickname: “Little Bastard”, the car of the movie star James Dean. He bought it while finishing the filming of “Giant”, in September 1955. He was driving it to the Salinas Road Race (CA), while he fatally crashed. The mith of the man and of the car raised from then on. A last little story is about the name of the car. Ferry Porsche was always grateful to Piero Dusio for his generosity in helping him pay for his father Ferdinand and his brother-in-law Anton Piëch's ransom as prisoners of war so, it is believed that he added to the name of the new 550 the term "Spyder", in honor of Dusio who first used it for his “Cisitalia 202 Spyder Mille Miglia”.

550-0084 is considered a piece of Austrian automobile history. With the owner and gentleman driver Gotfrid Köchert at the wheel, in 1956 it was a spectacular surprise at the Mille Miglia and won the Grand Prix of Germany at the Nürburgring. Köchert, the “racing jeweler” from the dynasty of the same name, a close friend of Jochen Rindt, was already 38 years old, when he ordered the car in Zuffenhausen. The archetypical gentleman driver, with the resources to afford the most expensive racing cars, he took the Mille Miglia seriously, private training the car for thousands of kms. Starting in Brescia with the 432 number, that is, at 4 o'clock 32 in the morning, reached Rome with a stunning race. His car was the fastest Porsche Spyder in the field, competing with world stars like Behra and Villoresi. But from Florence on, due to technical problems, he had to slow down and retire before Bologna. The same year, Köchert was 1st of class with this Spyder at the Nürburgring Grand Prix: the first great success of an Austrian driver, after the war.