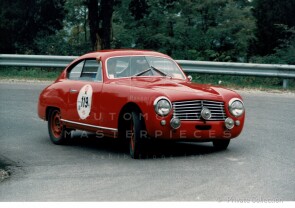 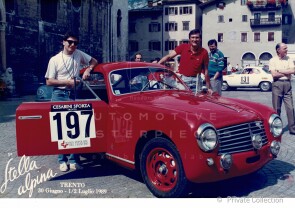 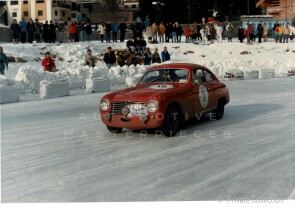 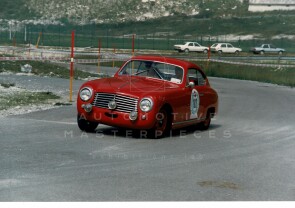 The 1100 S was Fiat’s first post-war sports car, but it had a strong lineage with the pre-war 508C “Nuova Balilla” 1100, appeared in 1937. The 1100 S was based on the light and rigid X-member frame of the 1100 B saloon. It featured a tuned engine and a dramatic streamlined body by Fiat which was loosely based off the pre-war 508 CMM. The two-seater body was produced by Carrozzerie Speciali at Fiat’s own Officine Lingotto under the direction of Giuseppe Cogno. Several of the early cars have a badge with this script on the body. The 1100 cc engine offered significantly more power than its predecessor and produced around 50 bhp. The S-spec engine had different camshafts and valves, a lubrication system with oil cooler, a centrifugal water pump with redesigned radiator and a crankshaft placed on four main bearings. Wind-tunnel testing allowed the 1100 S MM to reach speeds of 150 km/h, and 1100 S MMs gained 5th through 9th overall positions at the 1947 Mille Miglia, followed by a 2nd and 3rd overall in 1948. A number of 401 units of the 1100 S were made, but we suspect this might be an overambitious number that includes several other body styles. The chassis numbers went from 500001 to 500401. Despite the race purpose of the model, many 1100 S were sold to normal customers, convinced by the high speeds (over 150 kph) allowed by the powerful engine.

Just following, the 1949 Fiat 1100 S Berlinetta is the first example of small series Pinin Farina cars built for Fiat. Elegant and sporty at the same time, the car's design incorporates stylistic elements of the Cisitalia 202 and is believed to be a design of Battista Pinin Farina in person. Certainly, more modern than the previous 1100 S produced by Fiat Carrozzerie Speciali, it still had the characteristic split front windscreen. The model was presented and ran in the following events: the 1949 Concorso d’ Eleganza Villa d’Este/Villa Olmo, the 1950, 1951, 1952 Mille Miglia, the 1950 Salone Automobilistico di Bruxelles, the 1951 Coppa delle Dame, the 1952 Monte-Carlo Rally, the 1952 Concorso Eleganza di Taormina, the 1952 Giro del Lario. The 1100 S was followed by the 1100 E/S that was the sports version of the 1100 E saloon. Compared with the previous model 1100 S, the E/S featured a gear lever on the steering wheel, new instrument panel with built-in radio, front seat for 3 persons with continuous single backrest and two rear emergency seats. The chassis numbers started from 500402 to 500451.

Currently only 7 examples of this 1100 model, between S and E/S, have survived. It is not known the exact number of how many were produced, about forty different cars were identified in the researches.

The chassis no. 1100S*500326* is a matching numbers car.This specimen participated, from 1980s to present day, in a great number of re-enacting competitions and events, including: Winter Marathon, Stella Alpina, Tributo Gran Premio Parco Valentino.It participated in the 1000 Millas Sport in Argentina, 3-7 November 1999, ranking 29thoverall, with the proud former owner, the enthusiast Giovanbattista Villa Allegri.