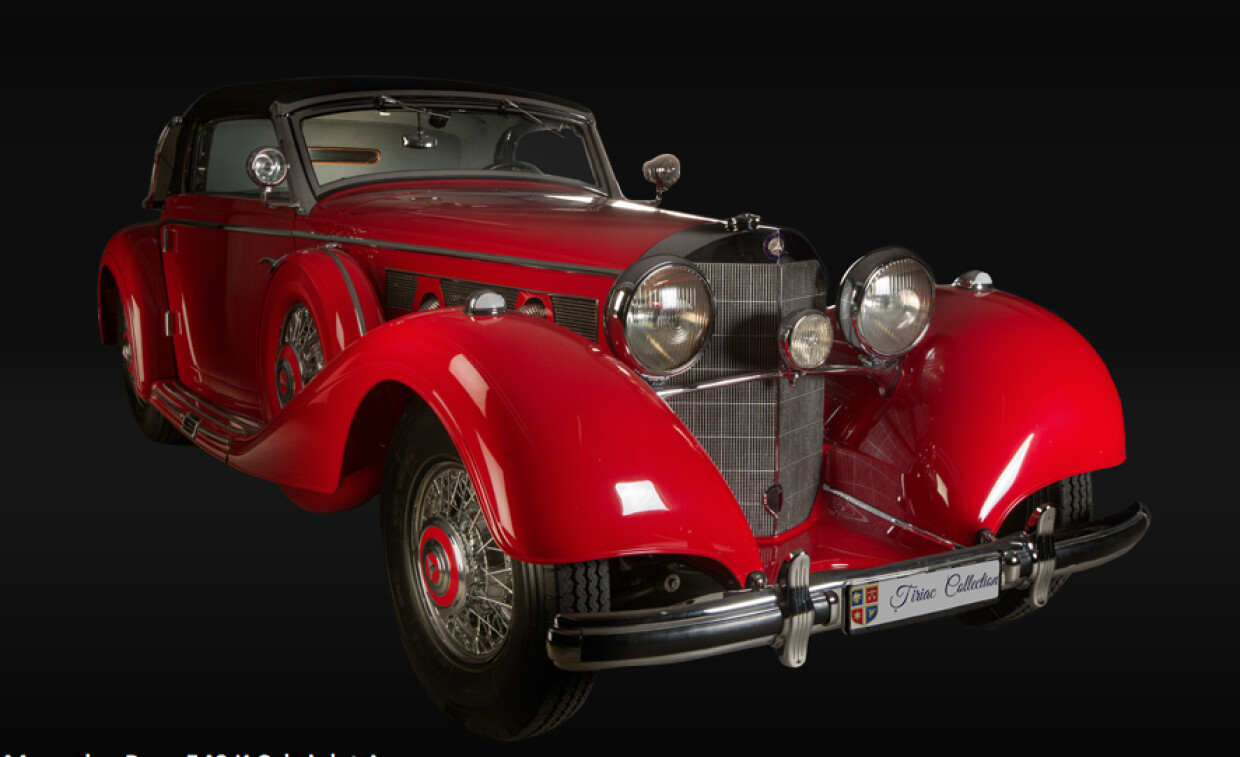 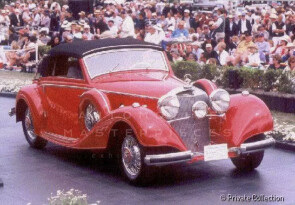 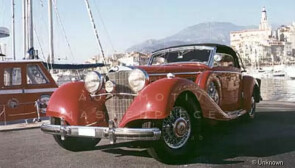 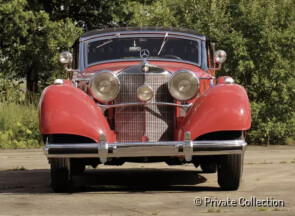 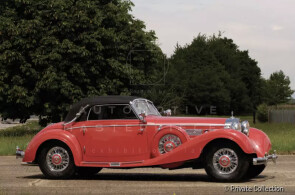 Share on
Owner Ion Tiriac (RO)
A masterpiece created by Hermann Ahrens with Sindelfingen Cabriolet A coachwork, built in only 83 units. Fully restored, it was part of Ecclestone Collection.

The Mercedes-Benz coachworks at Sindelfingen developed the cabriolet style to an art form. While each beautiful cabriolet built on the legendary supercharged 5.4 litre, 115/180hp, 540K (type W24 and W29) chassis was essentially different, with Teutonic efficiency Mercedes-Benz categorized its cabriolet offerings in six different configurations, designating each basic variant alphabetically. There were three separate four-door styles, the cabriolets D, E, and F, which accommodated up to seven passengers in comfort and luxury. More importantly, three two-door cabriolets combined luxury, tight weather protection, and sporting style in beautiful, subtle coachwork for anything from two to five people. The Cabriolet B and Cabriolet C had rear seating, the B had rear quarter windows, while the C had blind quarters on the folding top. The Cabriolet A was the most exclusive, a luxurious two-seater with blind rear quarters and accommodations behind the front seats only for the two privileged occupants’ luggage. The 540K was designed by Hermann Ahrens. Sindelfingen, where this exclusive coachwork was built, had started out as an ancillary production facility for Daimler during World War I as an aircraft production facility that employed as many as 5,600 people at the end of hostilities. Production of civilian aircraft continued for a short time after the war but soon Sindelfingen was designated as the Daimler production facility for Mercedes bodies. In this role it continued to follow the high standards of quality and finish that had been essential when building aircraft, a tradition that continued through World War II. Sindelfingen’s function expanded after the merger with Benz in 1926. New equipment was added, including huge presses of up to 1,000 tons capable of forming steel sheets 200 x 150 cm in size. By the end of 1934 employment at Sindelfingen had returned to over 5,000. Its products included not only car bodies for Mercedes-Benz but also truck bodies. It also built coachwork for other German manufacturers, constructing 20,000 bodies for BMW and many for Wanderer. Fifteen different trades were employed in building the wood-framed bodies constructed at Sindelfingen, all of whom were craftsmen, skilled and dedicated to producing the finest coachwork in the world. Costs were high and Sindelfingen’s supervisors worked constantly to streamline and refine the process to minimize handling and inventory. Beech and ash heartwood were used exclusively, dried in huge sheds at the factory, which held a year’s supply of wood, before sending each piece to one of the 12 drying kilns. Metal panels were stamped out on the giant presses, then individually fitted and welded together into subassemblies. Final assembly took place on a moving assembly line. The finished bodies were extensively and repeatedly hand-finished to ensure that before paint was applied the coachwork was as flat, smooth, and neatly joined as the most dedicated and skilled German artisans working with the finest materials attainable and the best machinery, equipment, supplies, and gauges could make it. While most coachwork built at the Mercedes-Benz Karosserie at Sindelfingen was taken to the Mercedes-Benz factories at Untertürkheim or Mannheim to be installed on their chassis, the most exclusive vehicles, such as the 540Ks, were assembled at Sindelfingen, where their assembly, finish, and trimming could be perfected by the company’s best workers. At each step along the way the master craftsmen who had created the framing and panels and finished them returned repeatedly to inspect the way their work was being assembled and to rectify any damage inflicted during assembly and testing.

Chassis number 169363 is one of only 83 Mercedes-Benz 540Ks believed to have been delivered with Sindelfingen Cabriolet A coachwork, and it has always been readily accepted in the market that, with their superb proportions and neat hood line when raised, they figure in the pecking order of Mercedes coachwork only just below the show stopping Roadsters and Special Roadsters. It is a comparatively late car, completed on 31 July 1937 and delivered to its first owner in Holland, Peter Paul Van Johannes at Firma Dunlop Rubber N.V. Holland, being first registered on 9 October 1937. Though the subsequent wartime and postwar history is unclear, the car is known to have been acquired by Mercedes-Benz enthusiasts Al and Sandra San Clemente in Shrewsbury, Massachusetts in 1963. During the ownership, chassis 169363 was subject to a magnificent five-year restoration. After several international Concours victories, Chassis 169363 was acquired by the well-known collector Michel Roquet in 1999, by the Ecclestone Collection in 2000 and by Heselden Collection in 2007. It is equipped with chrome wire wheels mounting the appropriate blackwall tires, chassis 169363 has two side-mounted spare wheels in steel housings. The Bosch lighting includes a stunning pair of cowl-mounted spotligts and a centre-mounted driving light. The interior upholstery, carpets, dashboard, instruments, and the switchgear are in an exceptional condition. The interior woodwork is outstanding. This unit has 49485 km on board.