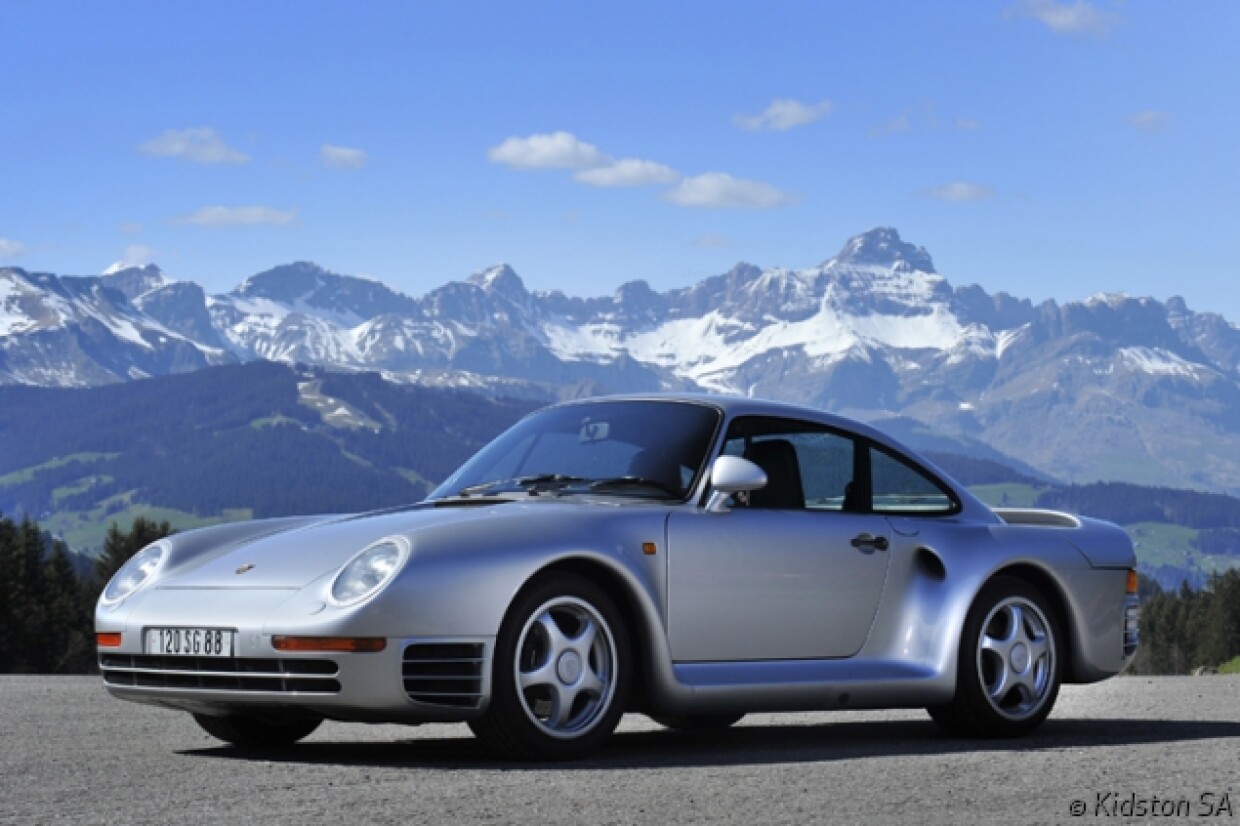 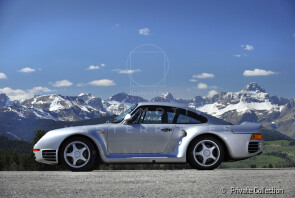 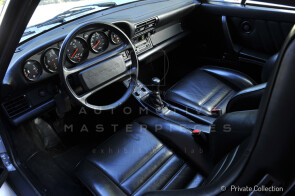 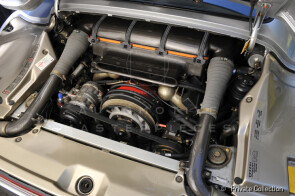 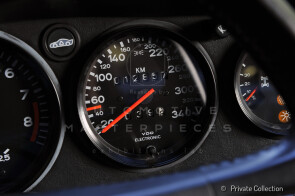 Share on
Owner Private collection
The no. 250 of the original batch of 250 Komfort models built. First owner Jochen Holy, grandson of fashion pioneer Hugo Boss and heir to the family fortunes.

The 959 is a sports car built by the German car manufacturer Porsche in 292 units between 1986 and 1988. This limited production was necessary to be able to enter the car in Group B competitions, a category which required a minimum number of 200 units for the homologation. The Porsche 959's odyssey started in 1983 and involved many pioneering techniques including molded fiberglass/Kevlar bodywork, the first production use of du Pont's Kevlar aramid material. The novelties included a very advanced electronically controlled four-wheel drive system called PSK (Porsche-Steuer Kupplung) which in 1995 will find its place, for the first time in the history of 911, in the Porsche 911 Turbo (993 series). The 959 was equipped with a 2850 cc 6-cylinder boxer engine capable of delivering 450 hp at 6500 rpm, with four valves per cylinder, water-cooled heads, forged aluminum pistons, titanium connecting rods, DOHC, two sequential intercooled turbochargers running a maximum of 1 atmosphere boost, dry sump lubrication and a Bosch Motronic ECU with digital ignition injection. Furthermore, an electronic system excluded one of the two turbines at lower revs and made it operate only when maximum power was required from the engine. The project dated back to 1981 and the presentation of the first prototype took place at the Frankfurt Motor Show in 1983. The definitive version was also unveiled in the same city two years later with production starting in 1986. Great attention was paid to technology, the 959 was equipped with electronically controlled suspension with three ride-height selections in addition to three settings for the shocks and tire pressure sensors. Its antilock braking system was controlled by high-speed microprocessors augmented by run-flat Bridgestone tyres. The maximum speed it could reach was around 314 km/h with an acceleration of 0-100 km/h in 3.7 seconds facilitated by the four-wheel drive. At the time it was the fastest road car in the world, a record held until the arrival of the Ferrari F40 in 1987 which reached 326 km/h. In addition to the standard version, called Komfort, a lightened and simplified version of the 959 was also produced, called S (Sport). Equipped with conventional and non-electronically controlled sports suspension, lightened by about a hundred kg due to the absence of rear seats, the complex on-board electronic systems, the reduction of sound-absorbing materials and the simplification of the finishes, as well as the rear-view mirror on the right side, it was characterized by decidedly superior performance: 0–100 km/h in 3.6 seconds, a top speed of 340 km/h and an engine boosted to approximately 515 HP. In 1984 Porsche decides to participate in the Paris-Dakar by developing the car, participates with various prototypes also in 1985 but only in 1986 the 959 is complete and gets first, second and fifth place. The car is nearly identical to the 'Sport' production model but with increased ground clearance. The engine was limited to around 400hp in order to run properly on the poor quality fuel available in Africa. The list of the Porsche 959's achievements could go on and on. It is considered the first of a new breed of ultra high performance supercar. 292 Porsche 959s left the Stuttgart factory, all ordered long before production and each one of them destined for wealthy automotive connoisseurs, and that's despite Porsche losing money on every single car they sold.

This German-market example was collected directly from the Porsche factory in Stuttgart by Herrn Jochen Holy, grandson of fashion pioneer Hugo Boss and heir to one of Germany's 200 biggest family fortunes, on 7th November 1988. He had specified ‘S7S7’ silver-grey metallic paintwork with all-black leather upholstery, with optional equipment listed as electrically adjustable sports seats left and right (M383 and M387) with heating (M139 and M340) and an alarm system (M533).