The Targa Abruzzo was disputed on the Circuito di Pescara, in the same days of the Coppa Acerbo (from 1924). While the latter was reserved for the Gran Prix cars (over 1500 cc) and "vetturette" (up to 1500 cc) in two separate races that were held on the same day, the Targa Abruzzo was reserved for Turismo cars, initially, and was disputed since 1927. It was a duration race that reached its top in 1934 and 1935 with the 24 hours of duration, then 12 and 6 hours, and it was held until 1940. Cars in the "sport" category were also admitted after the 1935. There was a great response from the car companies that won this competition that gave the name "Pescara" (from the name of the circuit) to their models that won (Alfa Romeo 2300 "Pescara", Siata "Pescara", etc. ) 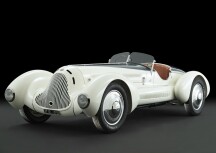