For Alfa Romeo, the 6C 2500 was the swansong of its era. When it debuted in 1939 as the third series of Vittorio Jano's legendary inline six-cylinder Alfas, the engineers involved could never have imagined that it would signal the end of the line for hand-built Alfa Romeos.<br / >Thanks to engine upgrades and a vastly improved fuel delivery system, the 6C 2500 was the first road going Alfa Romeo capable of 160 km/h. Additionally, it benefited from four-wheel independent suspension, with parallel trailing arms and coil springs in the front and swing axles with torsion bars at the rear. Alfa Romeo continued its tradition of offering several levels of tuning, starting with the 87-horsepower Turismo, moving up to the 110-horsepower Super Sport, or SS, and culminating in the track-ready Tipo 256 with 120 horsepower. The 6C 2500 was immediately met with praise and success from its hand-selected upscale clientele. Alfa Romeo was, of course, still in the business of providing rolling chassis to custom coachbuilders, even as the onset of war loomed. The first project created after war's end was the factory-offered 6C 2500 Freccia d'Oro, which had essentially the same running gear as the pre-war 6C 2500s.

In the post-war years the demand for bespoke coachworks was very high and probably more than fifteen Italian coachbuilders built special bodies to clothe the important Alfa Romeo 6C 2500 chassis. 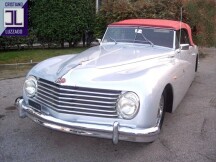 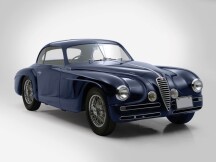 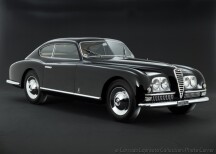