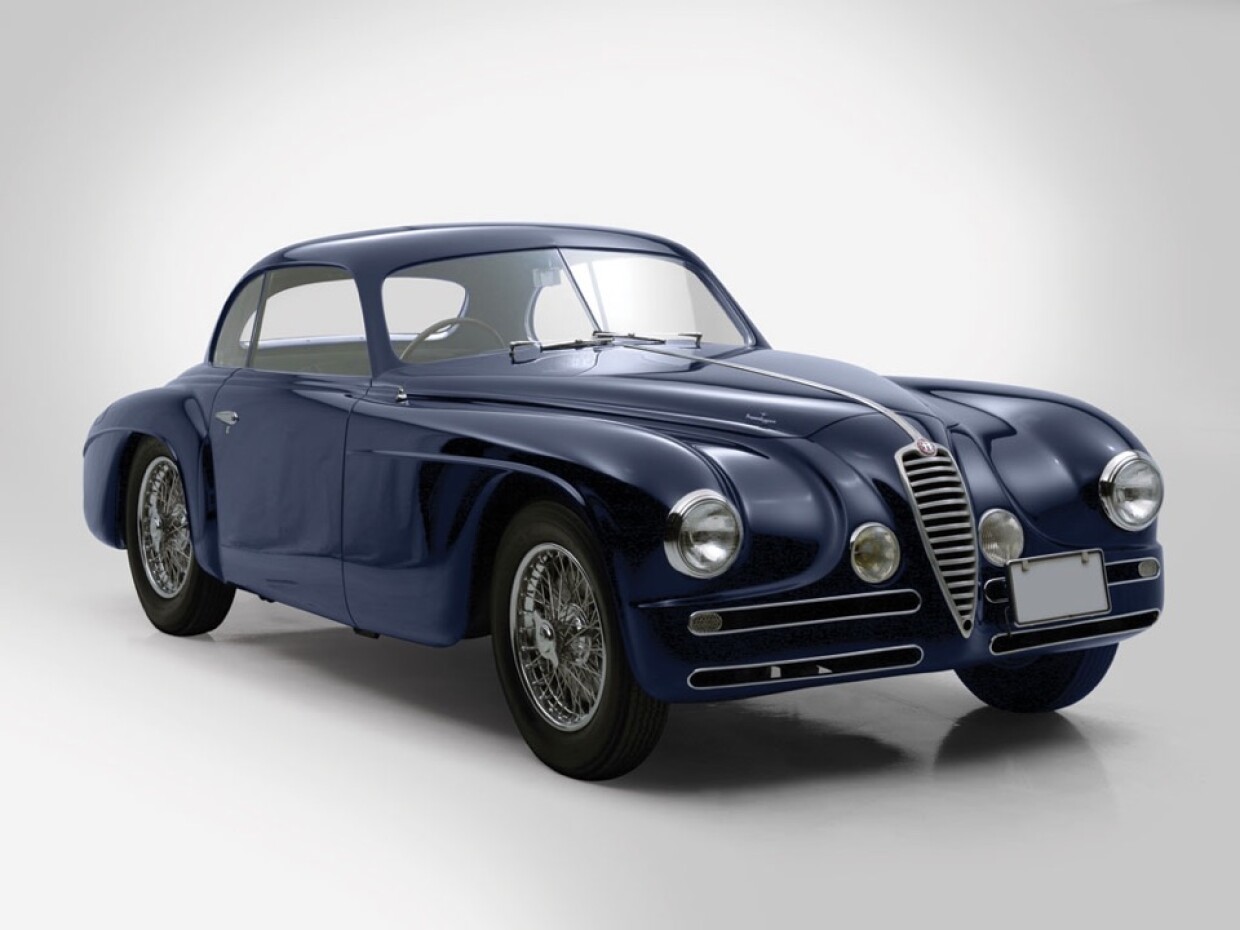 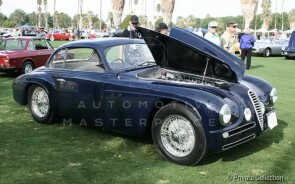 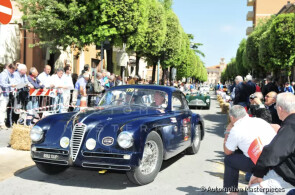 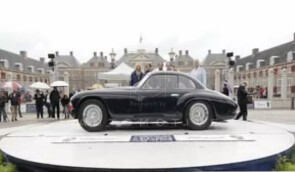 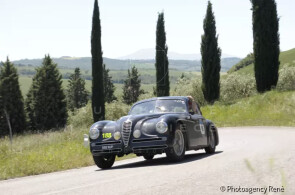 Share on
Owner Private collection
Coachbuilt by Touring as a Superleggera, it's one of 31 built and the last hand-made Alfa Romeo of its era. Formerly owned by Dutch racing legend Toine Hezemans.

The history of Alfa Romeo coincides basically with that of the history of the automobile and features many stories and numerous cars. The Alfa Romeo 6C stands out amongst the most representative models – the cars of the beginning and the modern post-war ones, and the racing and touring cars. The long journey of the Alfa Romeo 6C lasted almost 25 years, accompanying Alfa Romeo industries from the 20s to the 50s. In the early 1920s, Vittorio Jano was commissioned with creating a lightweight, high-performance vehicle to replace the large and heavy RL and RM models. The Alfa Romeo 6C was not only a model, but a complete range of road, race, and sports cars, produced between 1927 and 1954. The "6C" name refers to the number of cylinders of the car's inline-six engine. The different models’ bodies were made by coachbuilders such as Castagna, James Young, Pinin Farina, Touring and Zagato. From 1933, an Alfa Romeo built body also became available; it was made in Portello. The car was introduced in April 1925 at the Salone dell'Automobile di Milano as the 6C 1500, since the 2-litre class - that led Alfa Romeo to win the Automobile World Championship in 1925 - changed into the 1.5-litre class for 1926’s race season. The production started in 1927, with the P2 Grand Prix car as a base model. The more powerful 6C 1750 was introduced in 1929 in Rome. It was produced in six series between 1929 and 1933. Most of the cars were sold as a bare-chassis, then bodied by coachbuilders. The 1750 quickly gained a reputation for winning races. In 1933, the new Alfa Romeo 6C 1900 version was introduced, with a displacement of 1917 cc and with a light alloy head – used here for the first time. The powerful 8C 2300s, despite their successes, remained reserved for races and, to satisfy the market’s request for a high-performance automobile sold at a lower price, Alfa Romeo introduced the 6C 2300 at the Salone dell’Auto di Milano in 1934, designed to replace the 6C 1900. That same year, three 6C 2300 Gran Turismo bodied by Carrozzeria Touring won the first three places at the 24 Ore di Pescara. Therefore, after the race, Alfa Romeo began to sell the model under the new “Pescara” name. The arrival of the 6C 2300 B was a real revolution, introducing a chassis with independent suspensions on the four wheels. This car was “the king of the hill” in the history of the Mille Miglia race from 1935 to 1938, and the various 6C models participated with true and proper teams, led by the most talented drivers of the time. The Alfa Romeo 6C 2300 was replaced by the 6C 2500, the last car in the series before World War II. When production resumed, after the war, many special versions were built, shown in concours d’elegance and still important as participants in races. If the 6C 2300 B of 1935 introduced great changes to the original 6C design, a direct link was established by the engine. The development of the 6C engine, begun in 1925, ended with the final 2.5-liter displacement, whose production continued until 1953, keeping the fundamental design by Vittorio Jano very clear. The presentation of the sedan version took place at the Berlin Motor Show, in 1939, and was followed by the long wheelbase version, intended for special applications. In 1942, a major transformation of the frame was introduced, stiffened by a central cross-beam in place of the previous  parallel ones.The 6C 2500 Sport version, also presented in Berlin in 1939, was fitted with an engine derived from that of the 6C 2300 B Mille Miglia; the increase in displacement was obtained with a 2 mm larger bore. The Weber 36 DCR carburetor was the same of the Turismo model but with a different specification. 5.50x18 tires were mounted on wire wheels. In 1941, however, no Sport models were built: the production of war material had the upper hand. In 1942 the Sport version was also subjected to the same modification of the Turismo model chassis; the change beginning with frame no. 915119. Few cars were built in 1943 and 1944 due to the war. With the restart of production post-war, many chassis were supplied to external coachbuilders for the construction of custom-built cars. Pinin Farina and Touring had most of the orders, followed by Stabilimenti Farina, Ghia and Boneschi; Monviso, Castagna, Balbo's successors and the Swiss Graber each built only one car. An important thing to note, from a rib of the 6C 2500 Sport, the famous Super Sport version was born: it was a major development for competition, with a shortened chassis and three carburetors instead of a single one. The Super Sport, that was also born in 1939 as the racing-oriented 256 model (the number stands for 2.5 liters, 6 cylinders and reveals it’s Scuderia Ferrari origin), evolved into the Super Sport road car that would have a long life, until 1953, and its ultimate road-going expression in Carrozzeria Touring’s “Villa d'Este” coupe. The last example of the 6C 2500 Sport model was built, however, in 1950. The 2500 was the last version of the 6C series and was replaced by the Alfa Romeo 1900.

In 1949, Alfa Romeo introduced the Villa d’Este Berlinetta Coupés with Superleggera coachwork by Touring, of Milan. Alfa Romeo chose the name Villa d’Este after this design won the Concours d’Elegance, which was held at the historic resort on Lake Como in northern Italy. The Touring-bodied 1949 6C 2500 Super Sport that enthralled the crowds in 1949 won the Gran Premio Referendum, also known as the People’s Choice Award. Between 1949 and 1952, a mere thirty-one Villa d’Este Coupés were produced, not including an additional five cabriolets. The 6C 2500’s production ended in 1952 (a couple of racing examples were produced in 1953), representing the end of hand-built Alfa Romeos.

The Alfa Romeo presented here is one of the last 6C 2500 Super Sport chassis produced in 1949. Chassis number 915882 was manufactured on 9 November 1949 and delivered to Carrozzeria Touring with a 110-horsepower SS variant of the glorious six-cylinder, 2,443-cubic centimetre powerplant. Touring’s craftsmen spent the better part of December, January, and early February fitting the unique bodywork to the chassis before completing the project on 11 February 1950. As a coachbuilt model, each Villa d’Este built was considered to be a piece of rolling art, and no two examples produced were precisely identical. With a bumperless front end and false bumper slots, this particular Villa d’Este has a unique appearance. The front wings feature prominent Marchal lights and supplemental inboard Marchal Le Mans driving lamps. The resulting shape has been artfully constructed and is all at once smooth, harmonious, and downright sporty. After being presented to the public as a show car, this Alfa Romeo was sold to its first private owner and then offered for sale in the late 1950s in New York. In July 1973, the car was acquired by J. Bertis Terrell, who sold it to David K. Whalley, of Massachusetts. In 1979, Whalley sold the car to Homer Tsakis, a prominent pre- and post-war Alfa Romeo collector from New York who partially restored the car and maintained it in his private collection. In 1989, ill health forced the owner to sell most of his collection, including this car. West Coast restoration specialists Tony Niccosia and John Masuda handled the sale, and the car passed to the Fromo Corporation of Japan, in whose capable hands it received a full nut-and-bolt restoration in the early 1990s. Upon completion, Japanese baseball star and automobile collector Masayuki Kakefu purchased the Alfa and retained it until 2007. It was then acquired by Dutch racing legend Toine Hezemans, who enjoyed exercising the car and even took it on tour on the California Mille in 2008, Mille Miglia and Villa d'Este Style in 2012.