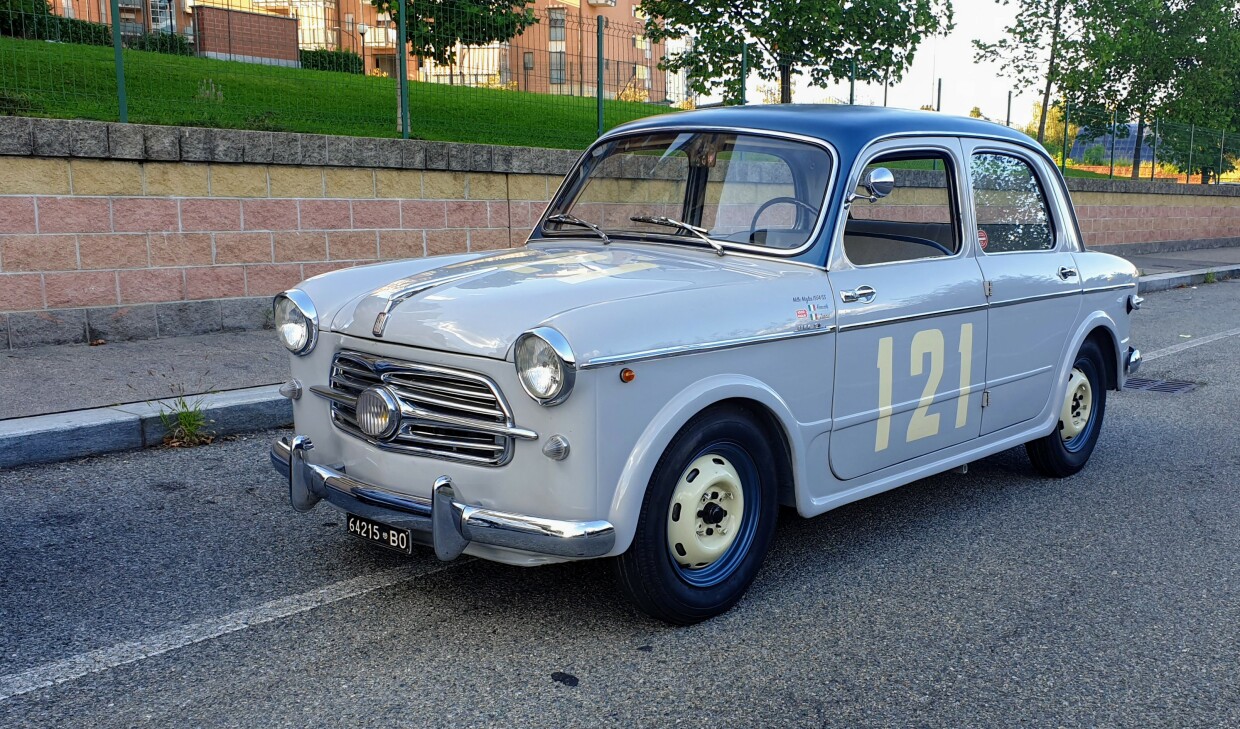 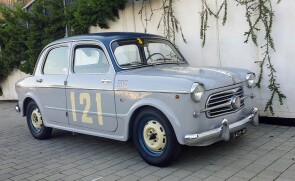 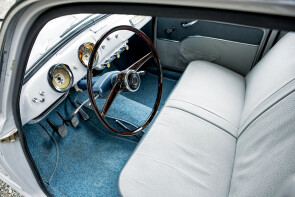 Share on
Owner Private collection
The FIAT family sport-car. This deeply tuned example was twice at the Mille Miglia with the same (121) race number, in 1954 (DNF) and in 1955, when it ranked 11thin class.

Many cars are loved for one reason or another. Some recall precise aspects of our history. Few, like the Fiat 1100 tell so many stories of Italy from the late 30s to the late 60s. The 1100 was the “child” of the Fiat 508C, the New Balilla 1100, and it quickly acquired the nickname "musone" for its imposing front grille. It underwent many evolutions to arrive in 1953 with the “birth” of the 1100/103. A totally new car, equipped with a monocoque chassis. It was on this that the designers, in the electrifying years of the “boom”, went wild in designing sports and elegant models. Pinin Farina being among the finest.

The Fiat 1100/103 was introduced in 1953; compared to the 1100 E it had a modern 4-door sedan body with integrated mudguards and front lights. Technically, apart from the transition to the monocoque solution, it was a classic design: rear-wheel drive, independent front, rear live axle and drum brakes. The name of the new model (1100/103) came from its project number. The model, despite being a family car, was immediately successful with sportsmen; even Enzo Ferrari complimented it. In October 1953, the car became available in an openly sports version, the 1100 TV (Turismo Veloce). The car boasted 48 hp, compared to the 36 hp in the normal versions, thanks in part to a double-barrel Weber carburetor and a higher compression ratio. On the TV, the transmission was divided into two parts connected by a joint, the final ratio also changed. Externally it was recognizable for its two-tone paint, richer finish, "tail" on the sides of the trunk and a central third light in the front grille. In 1956, a restyling involved all 1100/103s, giving birth to the 103 E series. In addition to some modifications to the front (new grille without the third central light, adoption of 2 fog lights) and to the interiors (dashboard, instrumentation, heating, coverings), the saloon benefited from a new tail light design and a different positioning of the spare wheel in the luggage compartment. The two-tone paint on the 103 E version also extended to the sides. From a more technical point of view, the E TV sedan now enjoyed 53 hp, with a declared maximum speed of about 140 km/h.

The TV was widely used in competitions and its most prestigious victories include class wins at the Mille Miglia in 1954 and 1955. Luciano Ciolfi won the Italian Touring Car Championship in a TV 1100 and Umberto Agnelli competed several times with a Turismo Veloce .

Fiat 1100/103 TV (Turismo Veloce), chassis no. 103TV*033956* is a car produced in the Carrozzerie Speciali Fiat department, was completed in the Mirafiori factory in Turin in December 1953 and delivered to the S.E.T. - Commissionaria FIAT in Bologna with a certificate of origin dated January 15, 1954. Sold on 1 February 1954 to ing. Guglielmo Franchi at the price of Lit 1,225,000, was registered with the number plate BO 64215 which it still owns today. Guglielmo Franchi, at the time residing in via delle Belle Arti 25 in Bologna, graduated in Engineering, was RAS Insurance Attorney and a great sports car enthusiast. Between 1951 and 1955 he ran several races such as the Giro della Calabria and 5 Mille Miglia consecutive: in 1951 he began his racing adventure in this competition as a navigator of Paolo Pagani aboard a Lancia Ardea, in 1952 he tried his hand as a pilot on a Fiat 500 C (Finetti co-driver, 218th overall), in 1953 on a Renault 4 CV (Barbieri co-driver, 204th overall) and in 1954 and 1955 he raced with this Fiat 1100/103 TV. His co-driver was Raffaello Zanasi, also from Bologna, who also took part in many races alongside established drivers such as Sergio Pedretti (Kim). The positive experience in the previous editions of the Mille Miglia pushed Eng. Franchi to continue his career as a gentleman driver with a more performing car. For this reason, as soon as it was purchased, he immediately had his new Fiat 1100/103 TV thoroughly tuned to make it competitive in the Turismo Speciale category. The main works carried out, as per the owner's letter to CSAI in Milan and ACI in Brescia, were: replacement of pistons, camshaft, valves, carburetor jets, spark plugs, coil; head polishing and compression increase; suspensions set-up; flywheel lightening, muffler modification. At the 21st Mille Miglia, held on 1-2 May 1954, he did not finish the competition and retired after 7h 56 '20' of the race. A short time later he had the engine of this FIAT 1100 TV completely replaced with a new one and had the update noted in the vehicle registration document on 12 July 1954, as can be seen from the chronological extract. In 1955 the engineer Franchi showed up again with this car and the same co-driver at the start of the Mille Miglia and curiously he was assigned the same number as the previous year: 121, then he left again at the same hour in 1954. Probably the engineer Franchi was not superstitious and the result proved him right. In fact, he finished the race in 115th position out of 279 competitors who finished the race and 11th in the category (Turismo di Serie Speciale up to 1300 cc.) out of 35 classified. His order of passage to the various controls was: 228th in Ravenna, 196th in Pescara, 188th in L'Aquila, 174th in Rome, 161st in Siena, 149th in Florence, in his Bologna he passed 151st at 14:02:17, in Cremona 130th. Before the start he wrote a letter to the organizers to complain, also on behalf of other Bolognese racers, about the change in the CSAI regulation (annex J) which now also allowed cars "derived from Gran Turismo", such as Alfa Romeo Giulietta and Porsche 356, in the Turismo category, a circumstance that later did not occur, receiving reassurances in this regard. A few days after finishing the Mille Miglia, on May 18, 1955, Eng. Franchi sold the car to Giuseppe Sangiorgi, born in Castel Bolognese in 1891, who kept it for three years and left it in exchange at the FIAT branch also in Bologna in June 1958 for the sum of 420,000 Lire, the same sum at which it was resold after a few days to Mr. Aldo Guccini, a hauler from Bologna, who certainly kept it at least until 1967. After being found by a well-known researcher and car historian, it became part of the collection of an Italian enthusiast, then passed to a Dutch dealer. It was recently bought at the Bonhams auction in Zoute in Belgium, returning to Italy.