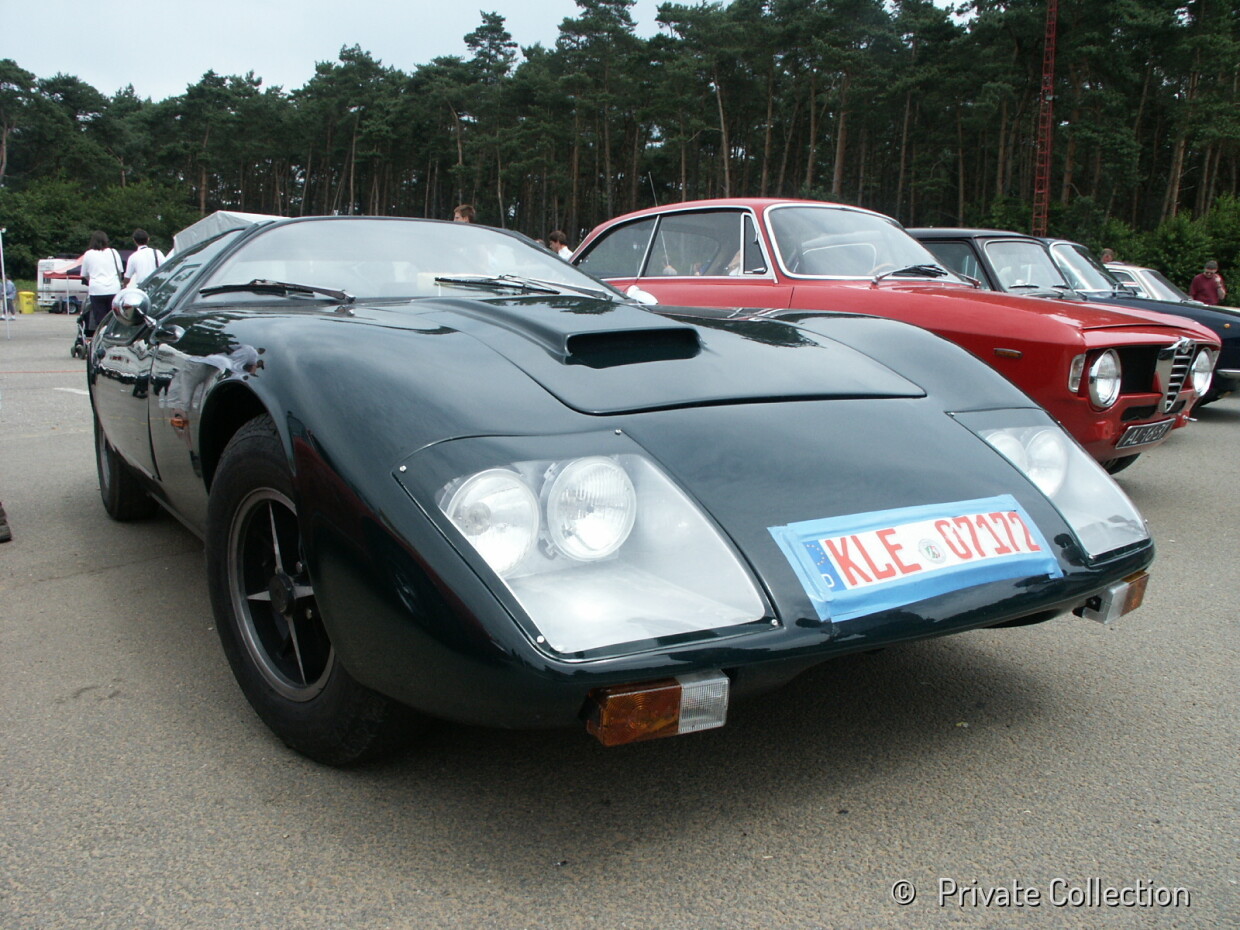 Share on
Owner Private collection
The GTT P2 was the last car built by Piper, and it’s an improved version of the GTT. Today, only 57 P2 remain of 80 cars built. This is the 67th chassis built.

The Piper story began in the mid-1960s at Campbell’s Garage in Hayes, Kent, where a talented team led by former racing driver George Henrotte created the Piper Sports Racer, a shapely, open-topped sports prototype with a GRP body over a space-frame chassis. The team’s thoughts then turned to building a fixed-head car which could be fitted out for either track or road use. The resultant Piper GT, designed by Tony Hilder, was launched at the 1967 Racing Car Show. Although it wasn’t an instant success, the GT clearly had potential. One man who thought so was Brian Sherwood, a racing driver who’d purchased one of the early Piper Sports Racers. Under Sherwood’s influence, the GT evolved into the GTT. Intended primarily as a road car, the GTT featured Ford running gear and was available in both fully-finished and component versions. In spite of this change of emphasis, the GTT’s racing origins were clear for all to see in the form of its non-adjustable seats and non-opening windows – ventilation being by means of a tilting sunroof. As orders started to come in for the new car, space at the Hayes premises, which also had to accommodate the increasingly successful tuning arm of the business, was at a premium. The solution was to split the company: Sherwood would take over the vehicle manufacturing arm and move production to larger premises in Wokingham. Tragically, Sherwood died in a road accident in December, 1969. Shattered as they were by the death of their friend and colleague, Piper’s works manager, Bill Atkinson, and company secretary, Tony Waller, formed a new company, Emmbrook Engineering, and continued to manufacture road going Pipers at the Wokingham premises until 1973, when assembly was shifted to Lincolnshire. Under the stewardship of Atkinson and Waller, a revised version of the GTT was introduced in 1971. Although this car, the Piper P2, was superficially identical to the GTT, it was seven inches longer, one inch higher and offered a number of detail improvements, not the least of which was the introduction of some degree of driver customisation by means of adjustable pedals. Other modifications included the replacement of the asymmetrically-positioned ‘power bulge’ by a scoop, the replacement of the Hillman Imp rear lights by Triumph Dolomite items, and the addition of a fuel gauge. The headlights were different, too, with the GTT’s single faired-in headlamps being replaced by either twin faired-in lights or pop-up units. Like the GTT, the P2 was offered in both ready-to-run and component form. The P2 was, like the GTT, availaible with different configuration of engine and gear box, such as the famous Ford Kent engine. The chassis was an improved version of the one fitted on the GT, a tubular steel chassis using Triumph Herald front suspension and Ford rear axle components. Today, there are 57 Piper P2 (out of a total production of around 80) known to survive, with examples being found even in USA and Japan. And thanks to the Piper Sports and Racing Car Club, the marque continues to enjoy a strong and eye-catching presence at classic car shows throughout Britain. There is an anecdote that concerns the Piper’s works manager: Bill Atkinson. Bill sold his Piper P2 in 1973, in order to find some money to complete his new house. But things came full circle when, in 1989, he had the chance to purchase his old P2. The car was in sorry conditions, but after many years Bill was able to take it back on the road.

The Piper GTT P2 chassis number 127167K is equipped with a Ford Kent 711 engine. This car chassis number means that the car was produced in December 1971 and was the 67th chassis built, on Firestone Wheels with a 1.760cc crossflow engine. The car was registered and run by one of the Piper Employees until January 1972, then passed through several owners. The car livery, around mid '70s was Ford Daytona Yellow and had a leather interior, but it’s not sure that is how it left the factory. In September 1988 the car was rebuilt down to the chassis by Piper Developments and it was resprayed Yellow. There might be another plate on the Chassis with the numbers 988/22 which is the Piper Developments code for their restoration. The car was auctioned in 1992 and went to Germany in 1993. When in the UK as JUL11K, the car was never raced. Once in Germany there are pictures of the car in black livery and with temporary plates and two persons in the car with headphones and what is probably maps or pace notes. The rear hatch can be seen from the photos and is not original as they are normally bonded into the rear and this acts to stiffen the rear bodywork but this was not done in the UK. The car went to Italy in 2008.