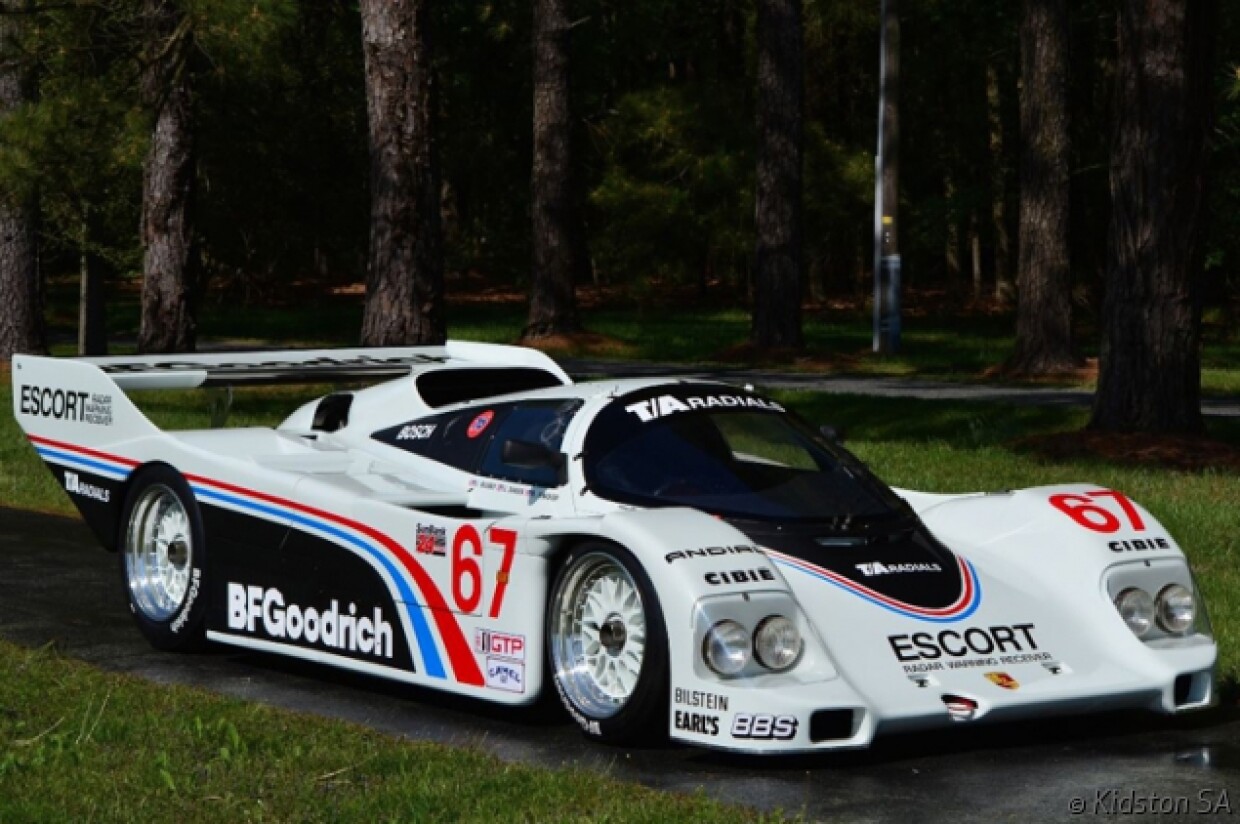 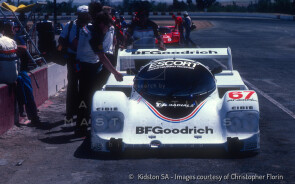 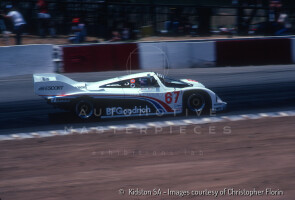 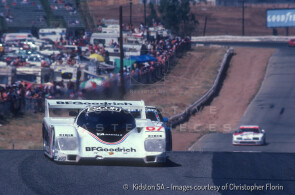 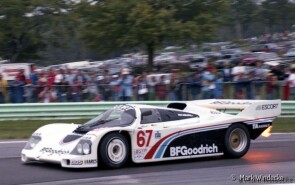 Share on
Owner Private collection
Twice on 24 Hours of Daytona podium: 3rd overall in 1985, 1986. It raced with BF Goodrich sponsorship in over 30 races with 8 podiums and 12 top five finishes.

No one could accuse Porsche of letting the grass grow under its feet when motor racing’s governing bodies chose to change regulations. Despite last-minute amendments to the fuel-saving Group C rules due to come into force in 1982, Stuttgart had a prototype 956 running on 27th March that year. For a decade, the World Championship was to be a Porsche benefit, with either factory ‘Rothmans’ or privateer 956/962s winning round after round, including Le Mans seven times. Over in the U.S., IMSA organiser John Bishop had a highly successful sprint series on his hands, with carefully balanced rules that equalised the performance of home-grown V8-powered Lolas and Marchs, Mustangs, Corvettes, Chevy Monzas and the inevitable turbo-Porsche 935s. ‘Economy’ was not an issue. As soon as the 956 was announced, North American Porsche teams wanted to run them, but Bishop wasn’t having any of it; the 956’s twin-turbo water-cooled motor, four-valve heads and complex electronics would mean another Stuttgart steamroller. And the 956 was ruled out on grounds of safety, too – the driver’s feet were ahead of the front axle. Eventually, a compromise was reached between the showman Bishop and Porsche’s Norbert Singer and Jürgen Barth. The result was the 962. By moving the front wheels forward by 120mm (4.72in) and fabricating an all-steel (rather than aluminium) roll-cage, the new car passed the safety test. The nose was slightly shorter (to still comply with Group C) and the rear wing was brought into the area covered by a plan view of the car, rather than hung out the back. The engine was a single-turbo, all-air-cooled ‘production’ motor. The capacity varied according to the year and rules, but either as a 2.9-, 3.0- or 3.2-litre it generated 700-750bhp. The original 956’s 2649cc, FIA Group C units produced around 620bhp. One factory and three customer 962s were seen in North America in 1984, all under the watchful eye of the engineers from Porsche, American Andial Racing’s Alwin Springer and driver/engineer Al Holbert. That year, the IMSA championship was won by a March-Chevy. In 1985, though, with Springer now responsible for most of the 962s’ engines and developing the factory Motronic electronic management system for more torque, the time of the 962 in the U.S. had arrived. Out of the 17 Camel GT Championship races in 1985, the 962 won 16. Holbert, now head of Porsche Motorsports North America, was victorious no less than nine times.

Former Hot-Rodder, regular IMSA entrant and top U.S. racing driver Jim Busby took long-term sponsor BF Goodrich’s colours from the Lola-Mazdas he’d entered in 1984 to a pair of brand-new Porsche 962s (chassis 106 and 108) for the 1985 Sun Bank 24 Hours of Daytona. They were running on the company’s racing version of its Comp T/A radial tyre. Paired with long-time co-driver Rick Knoop and Porsche factory driver Jochen Mass, Busby’s #67 car, chassis 106, raced strongly until exhaust problems caused a delay. At Riverside that year the team finished one-two, with chassis 106 coming a fine second, a result it repeated at Watkins Glen. The following year, '962 106' scored another third overall at Daytona, this time only one lap and ten seconds down on the winner. Over two years, Busby’s '962 106' was a front-runner in the IMSA series, with eight podiums and 12 top five finishes to its name. From the end of 1986, '962 106' sat mainly in retirement, still bearing the honourable mechanical and visual scars of two years of the hardest racing, right at the very peak of competition. Passing into the current owner’s hands in 2011, it was the subject of the most meticulous restoration by Bob Russo.