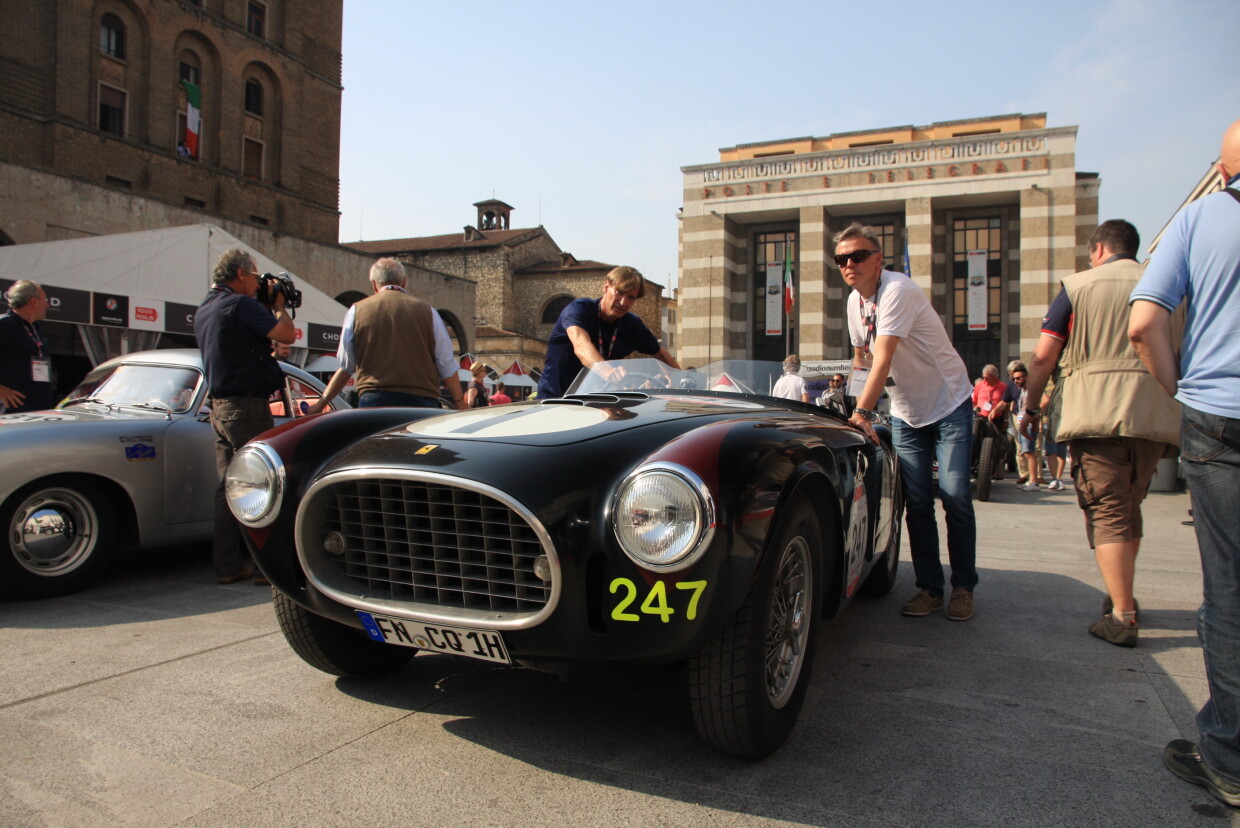 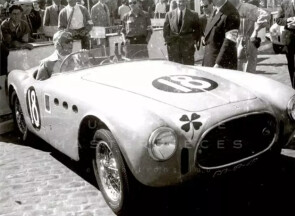 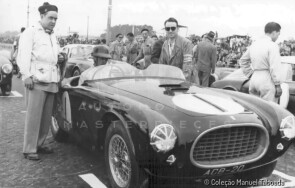 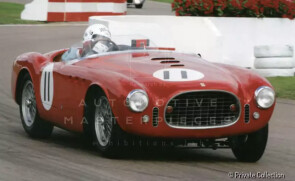 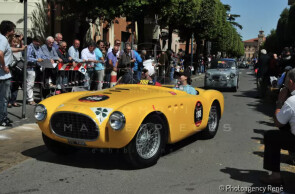 Share on
Owner Private collection
One of the 14 Ferrari 225 Sport Spider bodied by Vignale. Built on "tuboscocca" chassis. It boasts an intense activity of races in 1952-1953 in Portugal.

The Ferrari 225 S was a sports racing car produced by Ferrari in 1952. It was an evolution over the preceding Ferrari 212 Export with important engine upgrades that greatly improved power output. The model was extensively used in competition, winning many international races. The most important include 1952 Monaco Grand Prix for sports cars, Portuguese Grand Prix, Coppa d'Oro di Sicilia, Coppa della Toscana, Coppa d'Oro delle Dolomiti and many others. It was the final Colombo V12 engine iteration before the 250-family stretched it to 3.0-litres capacity. The 1952 Ferrari 225 S was a continued development from the 212 Export sports car. The new car shared many common aspects over the predecessor with some important improvements. With the similar chassis, so did the wheelbase and track measurements remained the same. The V12 engine received a slightly larger total displacement, due to a bigger bore. The power output benefited greatly from Aurelio Lampredi's technical research. The engine improvements consisted of an innovative and more efficient intake manifold design and an upgraded distribution system. Those improvement will be carried over to the next generation of Colombo V12-engined cars that debuted the very same year. Most cars used tried and tested tubular steel spaceframe chassis. Those had an "ED" or "EL" serial number suffix. Alternatively the 225 S could be based on an innovative "Tuboscocca" chassis and sport an "ET" suffix. In total 21 cars were produced. All were right-hand drive as was common for a racing cars. Some were converted from the 212 Export range, like the s/n 0104E, 0170ET or 0190ET. Some were even of a 166 MM ancestry like the s/n 0152EL, the very first 225 S. Fourteen open spyder cars were created, bodied by Vignale to a Giovanni Michelotti design. One particular example with a unique bodywork of open style wings was produced. The s/n 0176ED, commissioned by Antonio Stagnoli, also featured small inboard headlights and an outside spare wheel flush with the rear trunk. Additionally six closed Berlinettas also with a Vignale coachwork were made. There was also a single Touring Barchetta, s/n 0166ED, that was raced by Eugenio Castellotti. Ferrari continued to lose interest in Carrozzeria Touring and focused on other coachbuilders. Vignale was still in favour but would soon be replaced by Pinin Farina and Scaglietti. The 225 S Colombo V12 engine was based on the power unit from the Ferrari 212, but had the cylinders bored out a further 2 mm as opposed to an older 2.6-litre engine. The internal measurements were now 70 by 58.8 mm of bore and stroke and the resulting total capacity was 2,715.46 cc. Thanks to Lampredi's redesigned intake manifold and distribution, the power output grew from 165 hp to a 210 hp at 7200 rpm. Compression ratio was 8.5:1. The engine had a single overhead camshaft per cylinder bank, actuating two valves. Fuel was fed by three Weber 36DCF carburettors. There was also a single spark plug per cylinder served by two ignition coils. A single-plate clutch and a wet sump lubrication was installed. The front suspension was independent with double wishbones, transverse leaf spring and hydraulic shock absorbers. The rear consisted of a live axle with twin semi-elliptical springs and hydraulic shock absorbers. The preceding 212 Export had a Houdaille-type shock absorbers and single springs at the rear. Hydraulic drum brakes were mounted on all wheels and transmission was a five-speed, non-synchronised type. The Ferrari 225 S was mounted upon two types of chassis design. One was a tubular spaceframe created of an elliptical-section steel tubes, the other was a tubular semi-monocoque called Tuboscocca. Both those chassis were already used on the previous sports cars and retained 2,250 mm of wheelbase. The tubular chassis known as the Tuboscocca was designed and realised by Gilberto Colombo's Gilco chassis specialist company, exclusively for the racing cars. "Tubo-scocca" in Italian meaning "tube-body". Few select examples received a smaller diameter tubular trellis-frame with additional truss-type cross-braces. The new chassis was slightly lighter than the original tubular steel chassis and provided increased rigidity and additional strength. This design was introduced on a 1951 Ferrari 212 Inter Touring Berlinetta, s/n 0141ET, that was used in competition by "Pagnibon" (Pierre Boncompagni) and was later offered for the 212 Export and 225 S ranges. In total, eight 225 S' were mounted on the Tuboscocca chassis, six Vignale Spyders and further two Berlinettas. According to Gilco only fifteen such chassis were built in total, initially for the 212 Export range. The 225 S debuted at the Giro di Sicilia in 1952 with the number 443, driven by Piero Taruffi and Mario Vandelli. During this competition, the model dominated the race, but a broken cylinder head gasket compromised the outcome of the competition. It also participated in the Mille Miglia and the Targa Florio. One of the most important achievements of the model was the 1952 Monaco Grand Prix, where three 225 S finished in the top three. However, it was beaten at the Mille Miglia of the same year, where seven 225 Ss did not have the better of the more powerful 340 MM and the only 250 S in the race. The other competition in which the 225 S established itself was the 1955 Cuban Grand Prix. The model was driven by drivers such as Piero Taruffi, Giannino Marzotto, Luigi Villoresi, Eugenio Castellotti and Pierre Pagnibon.

Chassis no. 0198ET is a spider bodied by Vignale and designed by Giovanni Michelotti. From its chassis “ET” number we can say it has a “tuboscocca” chassis by Gilco. It’s one of 14 Vignale spiders on the total of 21 Ferrari 225S. This most attractive high performance, open cockpit Ferrari Sport Spider completed its initial factory road test in the Appenine foothills around Maranello on 28th May 1952, before being shipped to its first owner, the Portuguese Ferrari agent Joao A. Gaspar of Oporto. He had the car registered on Portuguese license plates “GD-18-48” and sold it to his fellow countryman and motor sports enthusiast Vasco Sameiro, of Lisbon. The Ferrari was painted yellow and on 22nd June 1952, it made its motor racing debut – driven by Vasco Sameiro in the Portuguese Grand Prix for sports cars, run around the streets of Oporto. The car had an intense racing life in the years 1952 and 1953. It then had a second sporting youth with races for historic cars in recent years, participating in various editions of the Mille Miglia re-enactment.