The Cisitalia-Fords, designated Model 808, were a stillborn effort, so Piero Dusio decided to spin off Savonuzzi’s coupé as a European car, using the Fiat 1900 as a base. Thus emerged the 505 DF (for Derivata Fiat), using the Fiat’s 1,901-cubic centimetre engine, which had been up-rated. The first 505 DF was shown at Salone Geneva in 1953. Chassis numbers indicate no more than ten were built, of which only two are known to survive. 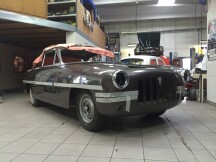