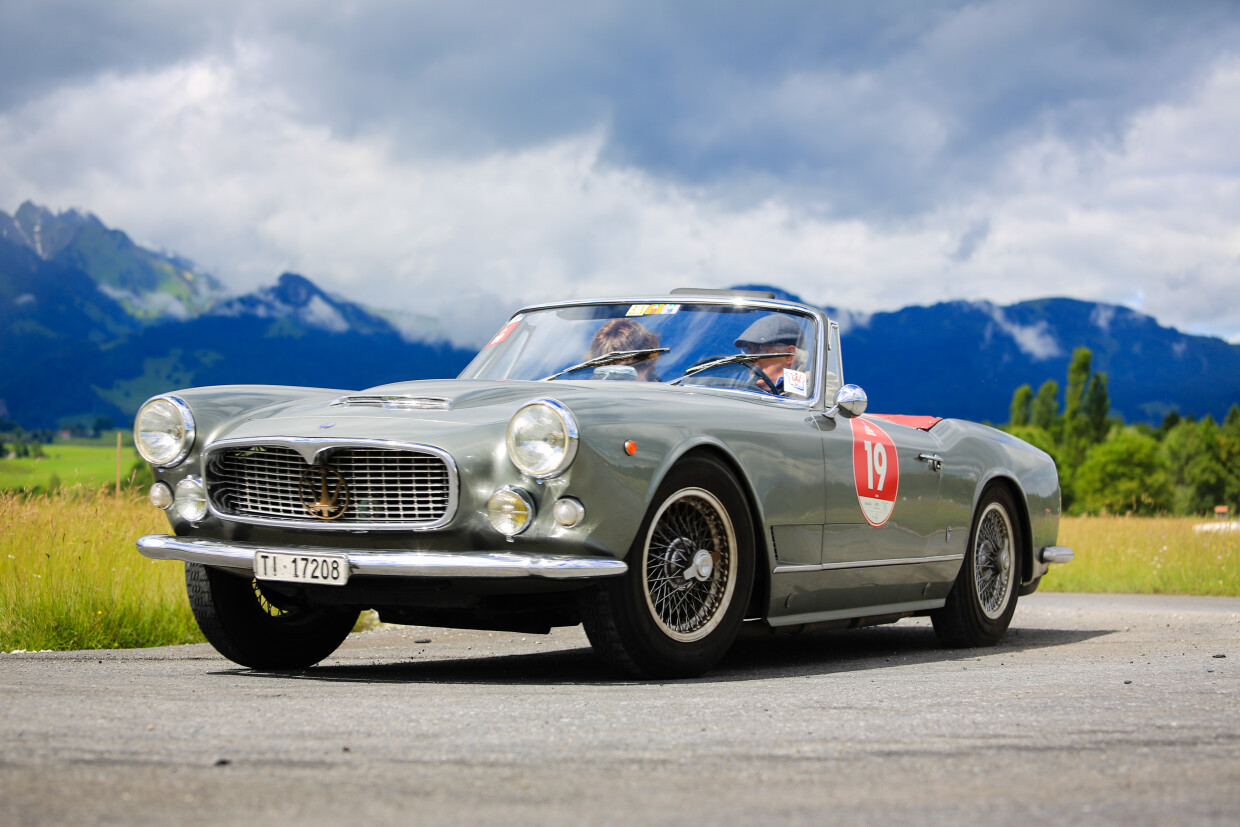 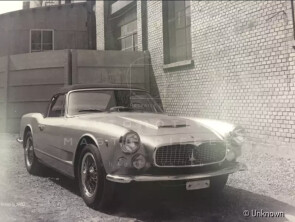 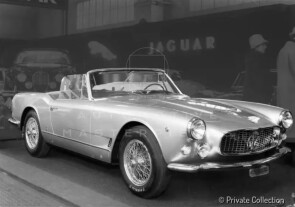 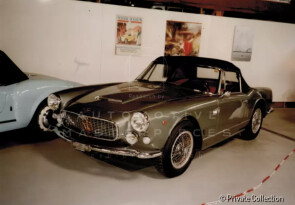 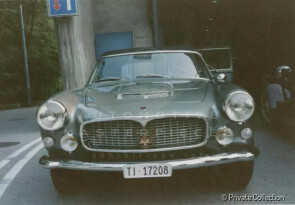 Share on
Owner Private collection
This very chassis is the one exposed in Maserati stand at the 30th Salon International de l'Auto Geneva, in March 1960. One of the 9 pre-production prototypes.

In the mid-1950s, Omer Orsi, owner of Maserati, saw the potential of the emerging luxury GT market, born together with the economic “boom”and favored by the rising motorway network. He understood that Maserati had to invest in a totally new model in terms of setting, quantity and displacement. The Maserati 3500 G.T., internally signed Type 101, is the first Maserati built on a large scale. The premises: the new car had to combine the typical Maserati sportiness with the need for luxury and comfort, allowing long journeys at high speed without staining driver and passengers. Road holding had to be safe and “easy” for all customers, without having to be skilled drivers. The interiors had to be of high quality. The mechanics had to be reliable as well as sporty. And all this had to be replicated in several units. The ambitious goal for Maserati, used to produce smaller cars and roughly 2-3 units per month, was to produce 2 cars a day. In 1956 the technical director of the Casa del Tridente, Giulio Alfieri, began to work on the engine that was derived from the 6-cylinder twin shaft of the racing 350S. The final engine was a 3.5-liter (3485 cc long-stroke) with aluminum crankcase and cylinder head, hemispherical combustion chambers, twin-shaft overhead distribution. The ignition was twin-spark and the power was supplied by 3 double-barrel Weber 42 DCOE carburettors. The engine thus had 220 hp at 5500 rpmfor a maximum speed of about 230 km/h. The frame was tubular, the front suspensions were independent with double wishbones and rear live axle with transverse bar and inclined shock absorbers, to increase lateral grip. The car featured with parts from external suppliers, for cost/quality reasons: ZF 4-speed gearbox and steering, Borg & Beck single-plate dry clutch, Salisbury differential, Girling drum brakes. The car was presented at the 1957 Geneva Motor Show, the design of the Milan-based Carrozzeria Touring was chosen for the production of the coupe. The cars were fitted with leather interiors and Jaeger instruments as standard. In 1959 the front disc brakes and the limited slip differential were offered as an option, standard the following year, plus the wire-wheelswith centre-lockknockoff hubs. In the same year the engine was redesigned to get 230 hpwith a smoother behavior at the same time. The success of the 3500GT Coupé was soon followed by a demand from its customers, especially in the United States, for an open-top version. As early as 1957, Frua produced a spider prototype. In 1958 Carrozzeria Touring produced two prototypes. But, it wasn't until 1959 that Maserati found the design they were looking for when Carrozzeria Vignale produced a spider, based on a design by Michelotti, built on a platform with a shortened wheelbase of 10 cm compared to the coupe. The version chosen for production in 1960 was, hence, that of Vignale, with the name of 3500 GTs or "Spyder Vignale", with length 4.45 m, width 1.64 m, height 1.31 m, wheelbase 2.5 m, weight 1380 kg. The style of the car - designed by Giovanni Michelotti - differed from that of the Touring coupé for the slightly more angular and muscular design. The spider version followed all updates of the coupe. The smaller dimensions gave the car a more agile road behavior. Unlike the coupé which was bodied in all aluminum, hence the use of the name “Superleggera”, the Spyder Vignale's body and doors were made of steel, for added strength, but the bonnet and boot lid were made of aluminum, to save on weight. The shortened chassis required that a smaller fuel tank be installed. Behind the driver and passenger seats there was only room for two very small rear seats. The manually operated retractable hood being concealed in a space behind these occasional seats. A steel detachable hardtop, Borrani chrome wire wheels and rear disc brakes were available as an optional extra (later a standard equipment). Over riders can be found on some spiders that were destined for the US market.From the production table below one will observe that there was no sequential use of chassis and engine numbers. There were many differences in the build of the Spyder Vignale during its years of production; starting with the body; there are also variations in the interior, exterior, instruments and so on. In the second half of 1961 the GTI version was introduced, with the Lucas injection and a power output of 235 hp. The carburettor version remained as an option and a 5-speed gearbox was fitted as standard. Disc brakes at the rear and the brake booster arrived in 1962. Production ended in 1964, however the chassis survived on the Sebring and the Mistral. The best year for sales of the 3500 G.T. was 1961, with about 500 units. A total of 2226 units were built, including around 250 spiders.

1960 Maserati 3500 GT Spider (Vignale) with chassis no. AM101.727 is the very car that was presented to press in a road event by the factory, in February, and then exposed in Maserati stand at the 30th Salon International de l'Auto Geneva, in March 1960. It was delivered to the Martinelli & Sonvico dealer (and, later, team) in Chiasso, to be exposed in the Geneva motor show with grey painted body, red Connolly leather interiors and optional Borrani wire wheels and hardtop. The chassis no. AM101.727 was one of the 9 pre-production prototypes; the sixth in chronological order. Each one differed from the other for minor or several details. Items that characterized this example were: the big Maserati trident symbol in the grille, surrounded by a thin round profile; the high front windshield ("high" not only compared to other prototypes, but above all to the final version of the series) with additional painted visible bodywork in the upper part; quarter windows; the air intake on the hood; the position, at the bottom after the door, of the Vignale plate; the additional lights under the headlights, instead of chrome-edged openings; absence of rostrums on the bumpers; low and thin chrome trim along the sides; grille side air vents, with aerodynamic continuations along the sides; upper front lights with "thick" chrome ring; full rear light clusters with stepped side profile; the presence of windscreen wipers, missing in some prototypes. The car was found back in 1994, in an Opel garage in Geneva. It had been stored there for ten years, from 1984. Then, in 1994, before closing the garage business, the widow of the former owner of the garage sold the Maserati to its actual owner. The car came with a not-matching engine unit but soon and luckily the original (370) matching engine was found by the renowned specialist Frank Mandarano, founder of the Maserati Club International. For the last 25 years was preserved in his collection, attending to some important re-enactment and Maserati meeting. The car was restored and continuously preserved in the years. Suffered a minor collision in 2009 and is now in perfect conditions.