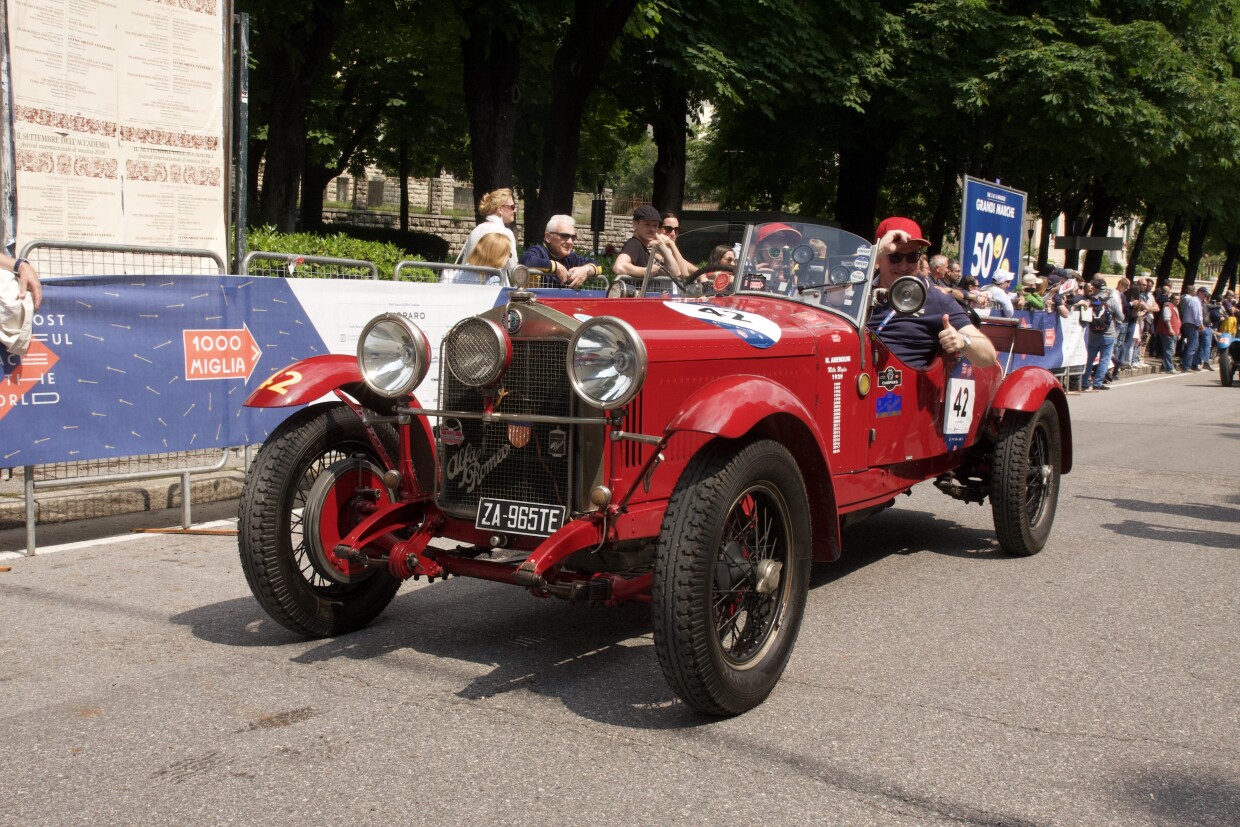 Share on
Owner Private collection
A rare survivor, a supercharger model. It raced the 1929 Mille Miglia, ranking 17th overall and 3rd in class. Its story passes through Tripoli and Luigi Chinetti.

no. 24 manufactured. 1 of 24 Alfa Romeo 6C 1500 Mille Miglia Speciale manufactured, 10 with compressor and 14 without compressor.

The epic of the Alfa Romeo 6C is going from the roaring years to the post-war period, between racing and touring cars. Starting from the feats of Nuvolari and of the greatest drivers of the time, the Alfa Romeo 6C has reached the status of the myth. In the early 1920s, Vittorio Jano was commissioned with creating a lightweight, high-performance vehicle to replace the large and heavy RL and RM models. Between 1927 and 1954, the Alfa Romeo 6C was produced in a series of models: road, race, and sports cars. The "6C" name refers to the number of cylinders of the car's straight six-cylinder engine. The different models’ bodyworks were made by coachbuilders such as Castagna, James Young, Pinin Farina, Touring and Zagato. From 1933, a custom-made Alfa Romeo’s built bodywork became available; it was made in Portello. The car was introduced in April 1925 at the Salone dell'Automobile di Milano as the 6C 1500. The 2-litre formula - that led Alfa Romeo to win the Automobile World Championship in 1925 - changed into the 1.5-litre formula for 1926’s races season. The production started in 1927, with the P2 Grand Prix car as a base model. The more performative 6C 1750 was introduced in 1929 in Rome.

Sold expressly as a competition car, the Alfa Romeo 6C 1500 Mille Miglia Speciale was only built for the 1928 season, during which time 24 were completed: ten with supercharger and 14 without. For the Mille Miglia Speciale, the engine was set 20cm further back in the chassis and the fuel tank was relocated immediately behind the driver, as opposed to the rear of the chassis, to improve weight distribution. Coachwork was lightweight, mainly by Zagato, but examples were bodied by Farina and other coachbuilders. It was of advanced design, a lightweight steel framework being employed instead of the traditional timber construction.

1928 Alfa Romeo 6C 1500 Mille Miglia Speciale (Zagato) with chassis no. 0231325 was sold new to Ugo de Giovanni and registered to him in Torino on July 4th, 1928. The car was raced by de Giovanni in the 1928 Susa-Moncenisio and by Gualtiero Natali (2ndowner of the car) in the Coppa Crespi, the same year. The Mille Miglia Speciale was then sold to Elia Scampini on November 26th, 1928 and registered VA3556 (Varese). Scampini competed in the Mille Miglia on April 13/14th, 1929 with co-driver Angelo Bogani and racing number 71, finishing 17thoverall and 3rd in class. Scampini raced also the 1929 Coppa Automobile Club Varese, finishing 4th in class, then sold the car to earl Anselmo Anselmi, of Arcevia (Ancona) where it was re-registered AN 2285. Anselmi competed with the car in the 1929 Reale Premio Roma; in 1930 competed in Coppa della Mengara and Tolentino-Colle di Paterno hill climb, finishing,on both occasions, 1stin the 1500cc sports car class. In 1950s, the car was exported by an English officer, Arthur Webb, to Tripoli where in 1958 it was sold by him to Captain Richard P. Henderson. A photograph shows the car running at speed on an airfield in Tripoli, and there is still its Libyan logbook. Captain Henderson took the Alfa back to the USA and in 1971 sold it to John Delamater, a sports car dealer. Delamater immediately sold it to Kirk White who traded it with Ferrari importer, Luigi Chinetti for a brand new Ferrari 365 GTB/4 Daytona. Details of this transaction appear in the book ‘Cannonball’ by Brock Yates. In 1978 Chinetti sold the Alfa to dealer Dan Maguiles in the UK, where it was sold to collectors who took part in a number of Mille Miglia Re-enactments. The MMS’s current Italian owner has competed successfully with the car in recent editions of the Mille Miglia Re-enactments. While in his possession the car has been maintained by renowned Italian specialist Galassi, in whose hands it has recently undergone a complete and expensive mechanical rebuild. The Mille Miglia Speciale is considered the most enjoyable to drive of all the Alfa Romeo 6C 1500 variants, as well as being the rarest. There are believed to be only three examples of the original 24 remaining and this is one of only two with the supercharger. The car is featured on Automotive Masterpieces' Mille Miglia's Chassis - The Ultimate Opus Volume no. II.