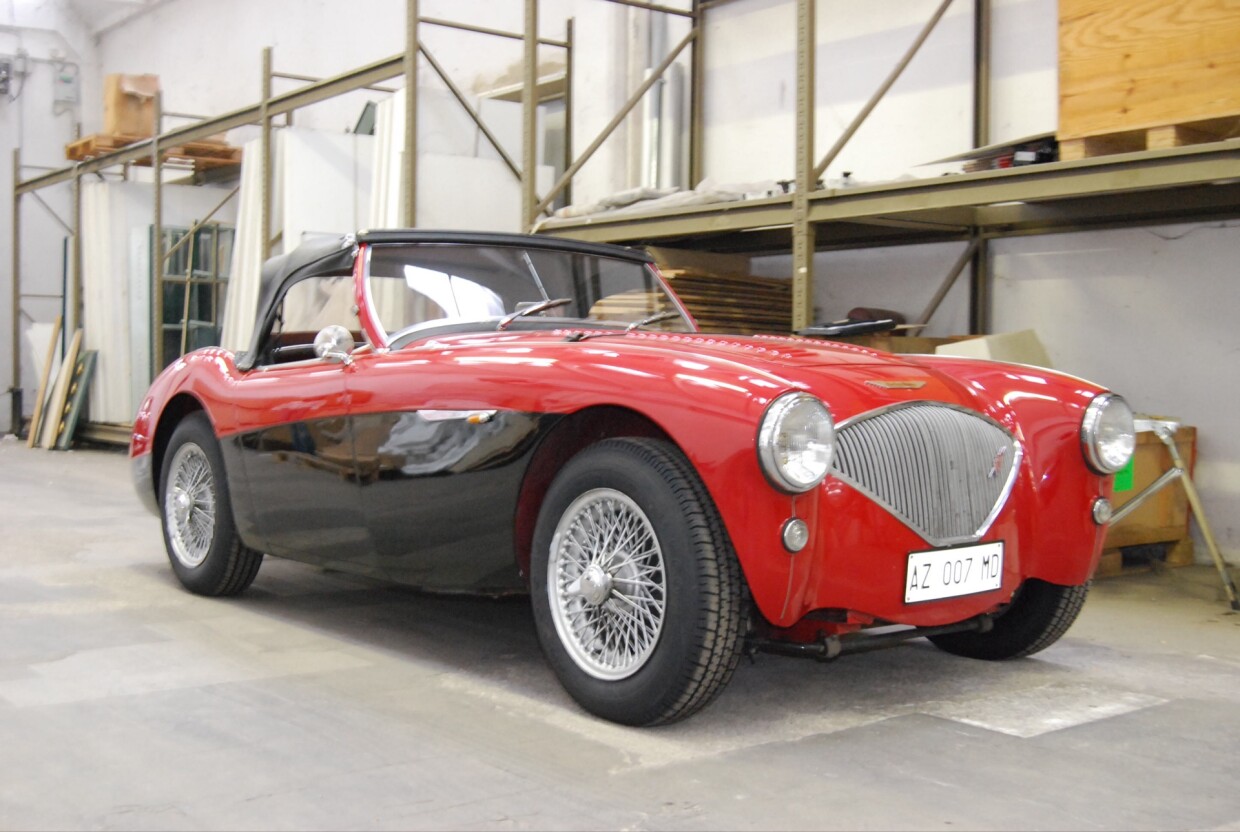 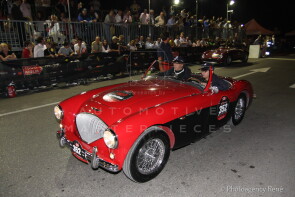 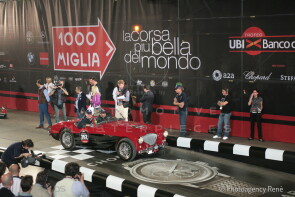 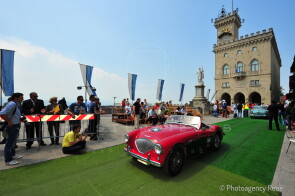 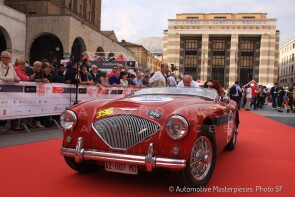 Share on
Owner Lodovico Camozzi (IT)
A roadster from the second series of Austin-Healey 100, often called 100/4 BN2, in a bright red/black livery. It was bought by the industrial Lodovico Camozzi.

Ex-racing driver Donald Healey was keen to take advantage of his racing successes and manufacture a car under his name. A sports car was developed by his small team as a competition car. The first prototype was immediately tested, reached a top speed of 111 mph and was presented in October 1952 at the Earls Court Motor Show in London. The Healey Hundred, named after its ability to reach 100 mph and as it was called when the car arrived at the show, was developed to be produced in-house by Healey's small car company in Warwick and based on Austin A90 Atlantic mechanicals. The design and the reaction to the car, impressed Leonard Lord, Chairman of Austin, who was looking for a replacement to the unsuccessful A90. The evening before the official openings for the show, a deal between Lord and Healey was done and the car was renamed the Austin-Healey 100. The Austin-Healey was born. The body lines and the interior shape of the Austin-Healey 100 were the work of Gerry Coker. He also designed the new company badge. The engineering design was mainly the work of Donald's son Geoffrey Healey and was mounted on a chassis designed by Barry Bilbie. Production Austin-Healey 100s were finished at Austin's Longbridge plant alongside the A90 and based on fully trimmed and painted body/chassis units produced by Jensen Motors in West Bromwich. It was fitted with a 2.6 liter, 4-cylinder in line, overhead valve engine, three speed gearbox. Many parts available from the Austin line when BMC came on board during the production process were used. The 100 was the first of three models later called the Big Healeys to distinguish them from the much smaller Austin-Healey Sprite. After producing the original Austin Healey 100 for nearly 2 years, the upgraded BN2-series cars added a four-speed manual transmission still with overdrive on the top two gears. Other features that distinguish the BN2 from the BN1 are the slightly larger front wheel arches, different rear axle and being the first 100 with optional two-tone paint. Upgrades available to the BN2 included an M kit with larger carburettors, a cold-air intake, high-lift camshaft and 8.1:1 compression cylinder head. These parts were available as a Le Mans package which could be ordered and installed on any Healey 100. 14,634 Austin-Healey 100s were produced from 1953 until 1956. The final BN2 was built in July 1956, with a total of 4604 BN2s produced from August 1955 to July 1956, including the 100M. These were replaced by the 3000 cars which were fitted with the six-cylinder engine.

Chassis BN2L-230588 is one of the 100 often called 100/4 BN2 and it was original delivered in Italy. The body number is 12122 and it is one of the two tone cars with Reno Red/Black colors. This car was bought by the industrial Lodovico Camozzi, chairman and managing director of Camozzi Group, eldest son of one of the founders Cav. Attilio Camozzi.