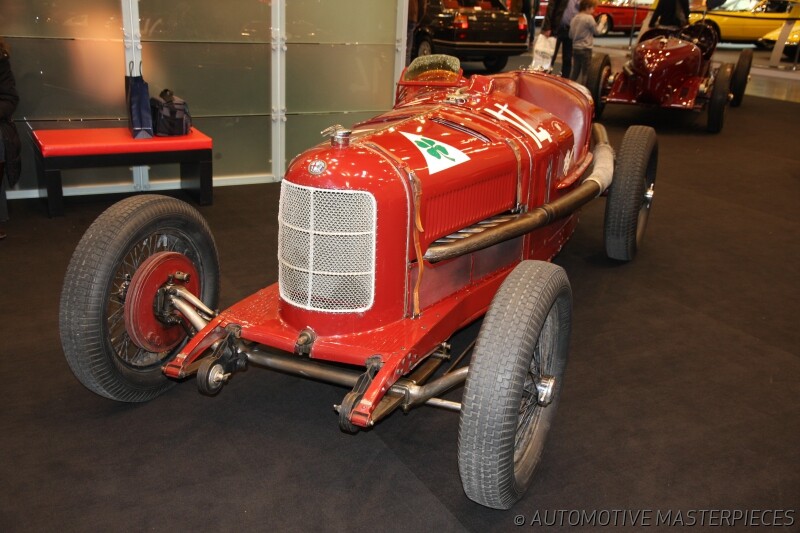 90 years ago the Alfa Romeo P2 made its début on the Cremona Circuit in 1924, a race which immediately demonstrated its superiority. The enthralling P2 Gran Premio (1925) from the Alfa Romeo Museum’s Collection that was shown at Essen is one of only two remaining cars in the world by production of just six cars. The second car is conserved at Turin Automobile Museum (www.museoauto.it). The P2 was the first Alfa Romeo with an 8-cylinder engine, the first designed by Vittorio Jano and the first Alfa Romeo to win a World Title in 1925 with Brilli-Peri. The P2’s victories propelled Alfa Romeo into the pantheon of the most prestigious manufacturers, resulting in huge worldwide fame and inaugurating its epic sporting period, a prelude to the success of the 1930s. The P2’s eight cylinders in line result in a displacement of 1987 cc and power of 155 HP (175 in the last version), taking the car to 225 km/h.

In 1954 Alfa Romeo presented the Giulietta Sprint at the Turin Motor Show. This agile, compact coupé with superior performance marked Alfa Romeo’s entry to the “small” category, with power units featuring displacement of less than 1,500 cubic centimetres. A masterpiece of design by Giovanni Scaglione for Bertone. The Giulietta Spider, affectionately termed “the young lady” by Giovanni Battista “Pinin” Farina, who designed its sleek lines, thus creating its great personality. Built on the Sprint’s floor panel, but with reduced wheelbase, the Giulietta Spider meets with international success. At Essen there were a 1955 Giulietta Spider America prototype and a 1955 Giulietta saloon from Alfa Romeo Museum; a 1954 Giulietta Sprint and a 1983 Giulietta Turbodelta from private owners.

AUTOMOTIVE MASTERPIECES exhibition lab will pay tribute to the Giulietta Sprint in the 100th Anniversary of the birth of Nuccio Bertone 1914-1997. Follow the census of the most rare Giuliettas of the world.

The spotlight was also on the Alfa Romeo RL Targa Florio (1923) that on the one hand calls to mind Alfa Romeo's first victory at the legendary Targa Florio in Sicily, and on the other marks the birth of the Quadrifoglio Verde as the symbol inextricably linked to the sporting success of Alfa Romeo. As a good luck charm, a four-leaf clover (“quadrifoglio”) was painted to counter the racing number 13 assigned to Ugo Sivocci on the bonnet of the car he drove to victory. The Museum’s car has the original engine used in the competition in 1923: a 6 cylinder in line with 3154 cc and 95 HP, propelling the car to a top speed of 160 km/h.

This car will be one of the queens of the virtual exhibition 110th Targa Florio 1906-1977 that AUTOMOTIVE MASTERPIECES wants to celebrate in 2016.

The historic cars from the Alfa Romeo Museum that were on display in Essen created the ideal setting for the new Giulietta and MiTo Quadrifoglio Verdes. At the same time, the two new cars pay tribute to the legendary history of the ‘Quadrifoglio Verde’, the symbol that has identified the most high-performance vehicles made by Alfa Romeo since 1923, not only cars competing on the world’s racetracks, but also certain special production versions (www.alfaromeo.com).

The stand also featured a 8C 2300 “tipo Monza” (1931), always from Alfa's Museum, a model designed by Vittorio Jano that boasts an 8 cylinder in line engine – two 4-cylinder blocks united by a central gear train – supercharged via a lobed compressor (two in the subsequent version). An expression of Alfa’s technical superiority in the first half of the 1930s, this power unit allowed the Quadrifoglio cars to acquire countless victories: 24 Hours of Le Mans, Targa Florio, Mille Miglia, Spa-Francorchamps 24 Hours, international Grands Prix. The 8C 2300 won on its début at Monza – hence the name “tipo Monza” – and it is with just such a car that Tazio Nuvolari won the 1932 Monaco Grand Prix. The “8C” engine concludes its sporting career with success at the 1947 Mille Miglia (8C 2900B Lungo).

The Alfa Romeo team for the German show is completed by a TZ2 from 1965 displayed on the central stand of the organisation that pays homage to the “Zagato” studio.

AUTOMOTIVE MASTERPIECES wants to take a census of the few remaining cars to celebrate the 50th anniversary of the presentation at the 1964 Turin Motor Show. 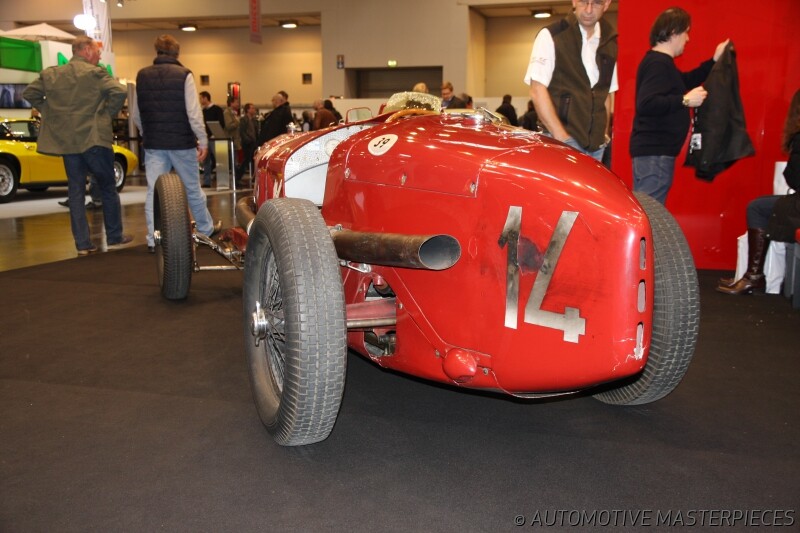 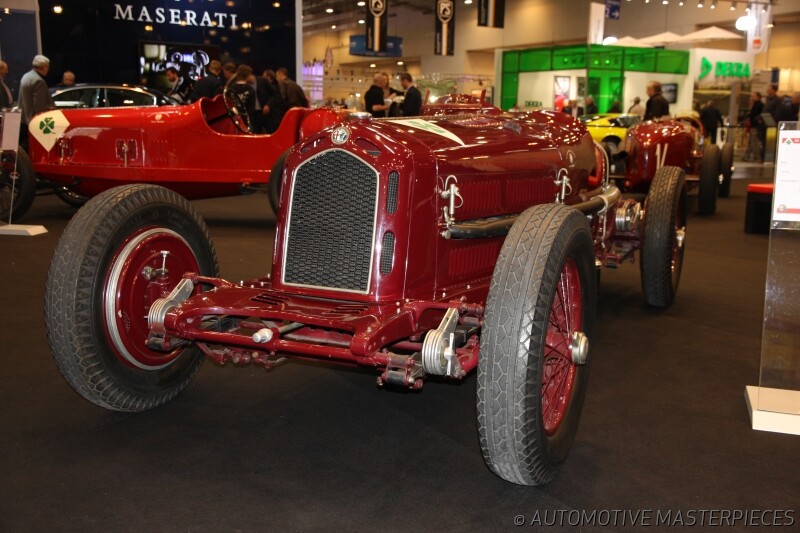 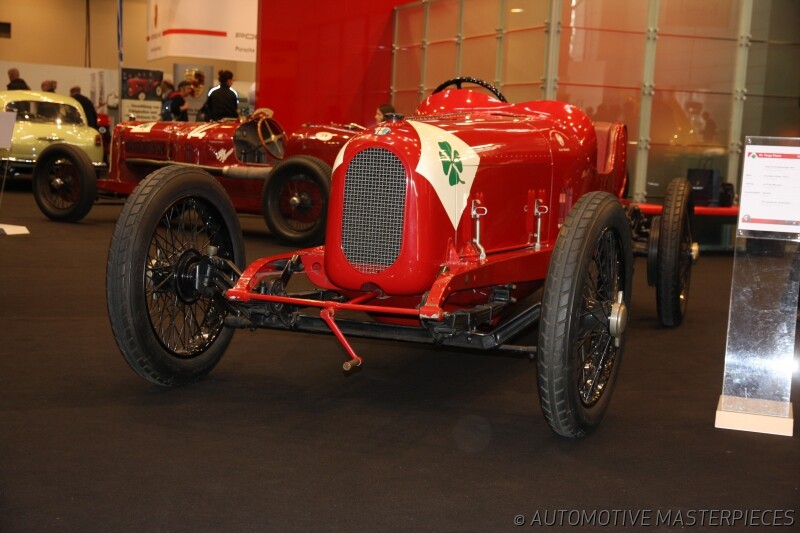 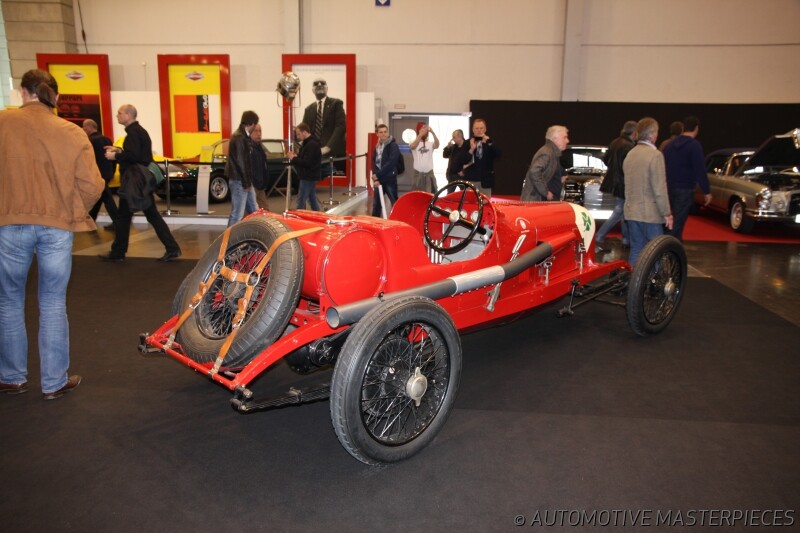 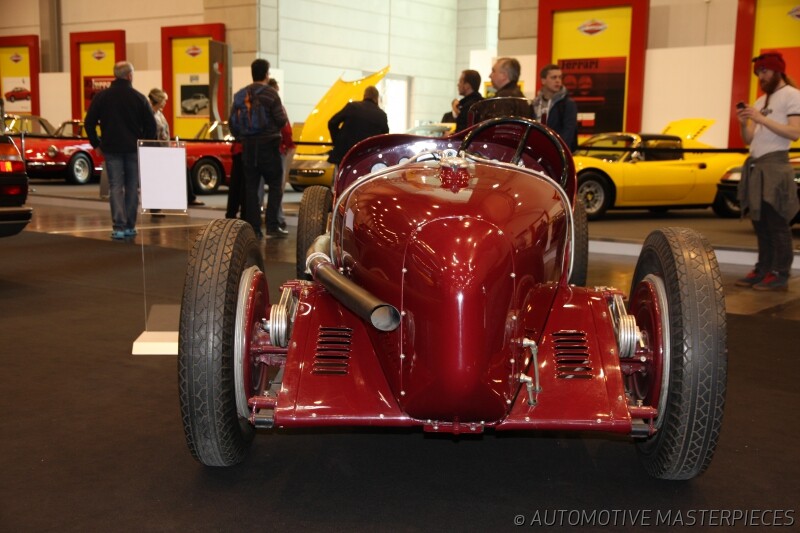 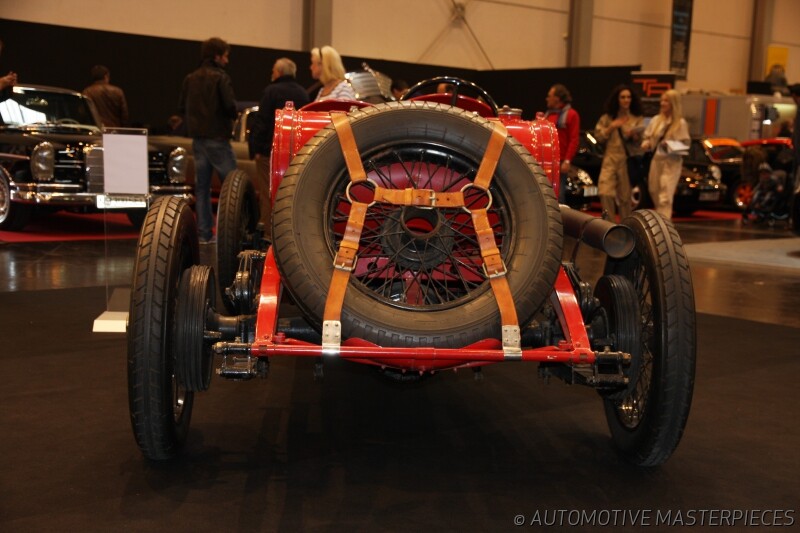 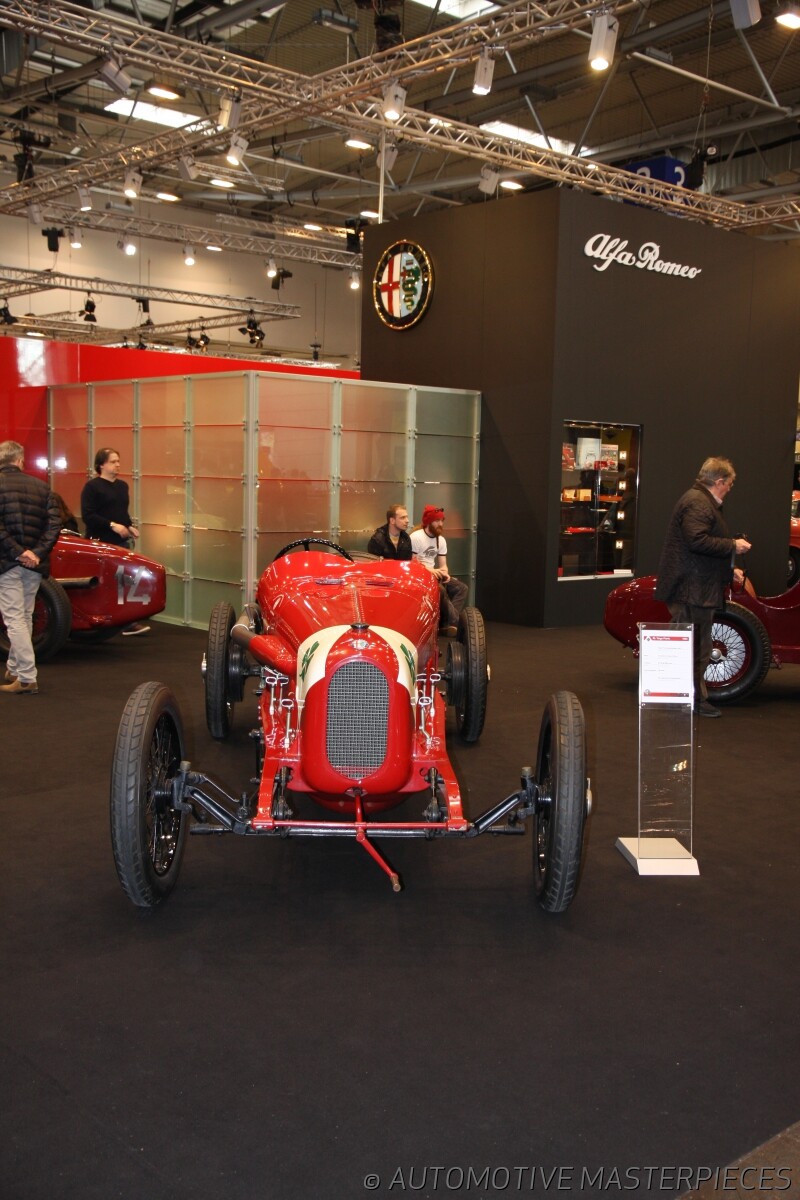 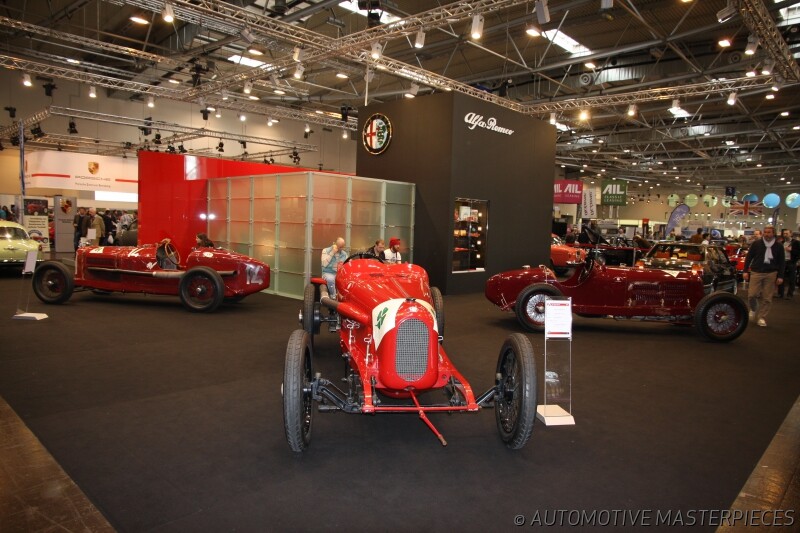 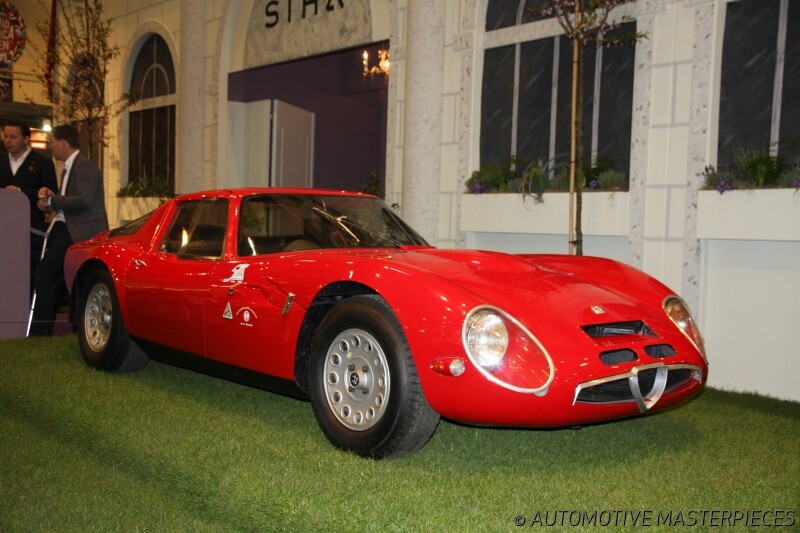 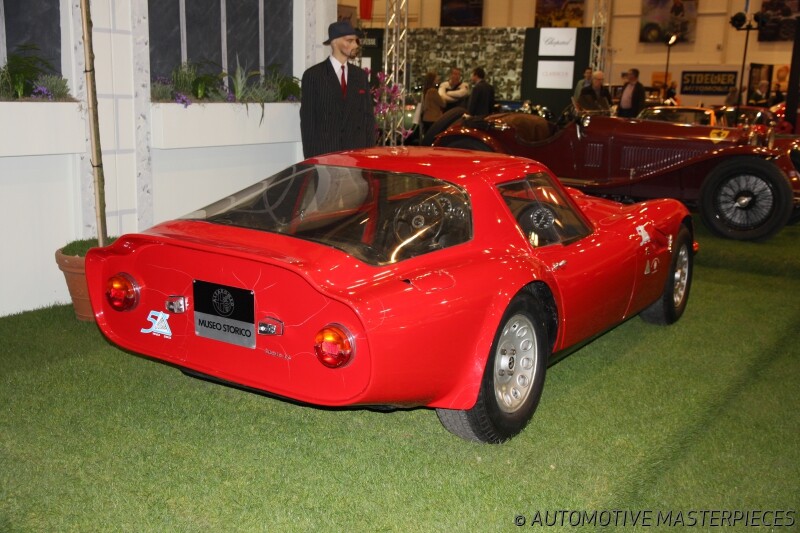 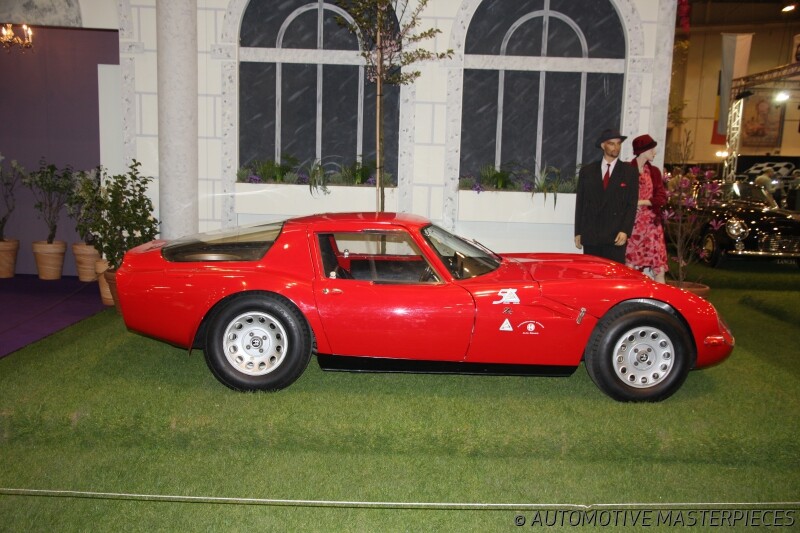