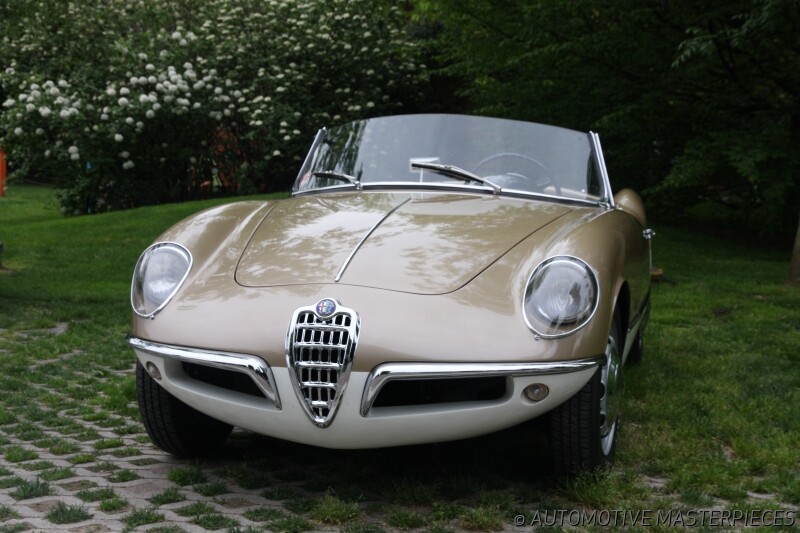 Saturday, April 12 at Franciacorta Historic 2014 there were many rare cars. We have selected four and invite you to discover more by visiting the event website at www.franciacortahistoric.it

1948 Fiat Gilco Mariani 1100 Sport. With the reintroduction in Italy in the immediate post-war period of the FIA’s International Sports Car category, the rule obliging the use of the production car chassis from which the engine was taken was abandoned. Following the example set by Stanguellini, the first firm to use in 1947 a tubular chassis designed by the engineer Massimino and built by Gilco, other craft-based enterprises built cars with engines derived from the Fiat 1100 and chassis built in limited numbers by Gilberto Colombo. Among these was the car assembled by the coachbuilder Mariani of Pistoia for Elio Checcacci. The engine had been developed by Stanguellini of Modena. The owner competed with the car in the 1949 MM but without success. This car is eligible for several virtual exhibition, including among others, the 90th Mille Miglia 1927-1957 that AUTOMOTIVE MASTERPIECES wants to celebrate in 2017.

1949 Healey Silverstone. First Healey Silverstone built, car chassis no. D1 was one of three Works cars prepared to compete in the BRDC International Trophy Race at Silverstone in August 1949. Driven by the famous French driver Louis Chiron, the new car placed sixth overall and fourth in class. Moreover, Healey won the Team Prize and the new model earned its “Silverstone” moniker. Fitted with the 2.4-liter Riley engine, the car was raced until 1952 prior to being destined for full road use. This car is eligible for several virtual exhibition, including among others, one dedicated to the cars with Chassis no. 1.

1951 Ermini 1100 Sport. Weighing a mere 560 kg empty, this Ermini Siluro may be considered the ultimate in the model’s development. Built on a Gilco 203 chassis with the wheelbase reduced to 2.20 m, it mounts the tried and tested Fiat Ermini engine (Fiat 1100 E cylinder block, Ermini twin-cam head). Designed in 1951 and bodied by Mariani (Pistoia), it was adapted to meet successive international sporting regulations requiring fenders fitted to the bodywork. This car didn’t have a very intense racing career, as the owner, a gentleman driver from Livorno, decided after the 1951 Mille Miglia not to enter it for any other particularly demanding races. The engine is an in-line 4 cylinder with overhead cam developing a maximum output of 82 hp at 6200 rpm, wet sump forced lubrication and Weber carburetor (2) fuel feed. The front brakes are based on the Fiat 1500, while the rear ones are from the Fiat 1100, both being hydraulic drum. This car is eligible for several virtual exhibition, including among others, the 90th Mille Miglia 1927-1957 and the 110th Pasquale Ermini 1905-1958.

1956 Alfa Romeo Giulietta Prototipo. The 1954 Alfa Romeo Giulietta was an important vehicle for Alfa Romeo, because it was the first really important offering since World War II that truly resembled the racing inspired vehicles Alfa was capable of producing. The vehicle were built with the engine in the front and powered the rear wheels. Most used a four-speed manual gearbox with front and rear drum brakes. The steering was worm and roller with the front suspension comprised of wishbones with telescopic dampers and coil springs with anti-roll bar while the rear was a rigid live axle with telescopic dampers and coil springs. Max Hoffman, in 1954, saw a preview of the Alfa Romeo 750 series Sprint Coupé. He liked what he saw, but stipulated that Alfa needed to produce an open-top roadster version. Both Pinin Farina and Bertone were invited from Alfa Romeo to submit proposals. The latter built the stunning Giulietta Spider we have the fortune to see at Franciacorta Historic 2014. The bodystyle came from Franco Scaglione, maybe the most inspired designer of that period. This is the second of two Giulietta Spider prototypes designed by Scaglione and built by Bertone. This vehicle was totally restored after 2000, with a particular attention to its originary body. The restorer ability made possible to save the original top, seats, lateral windows and moquette. All other parts was genuine Alfa Romeo parts of fifties and the working techniques was the same of the original one. This car is eligible for several virtual exhibition, including among others, the 100th Nuccio Bertone 1914-1997 and the 100th Franco Scaglione 1916-1993. The website of this car is work in progress. 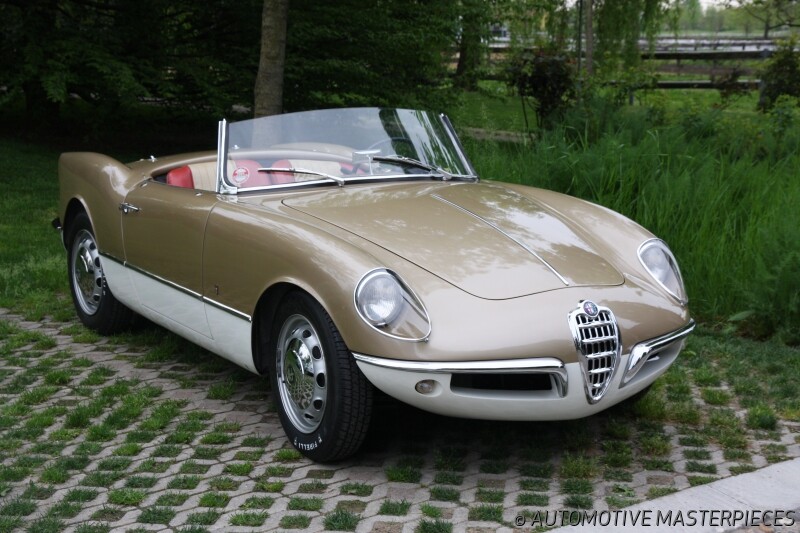 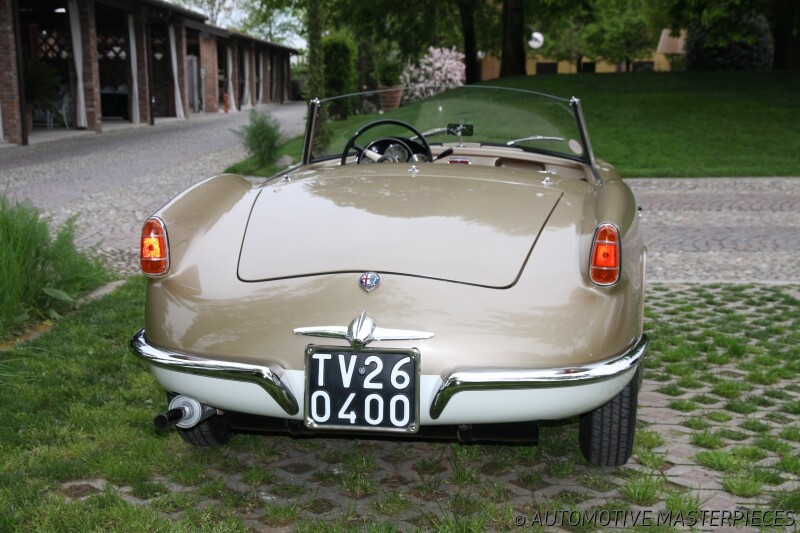 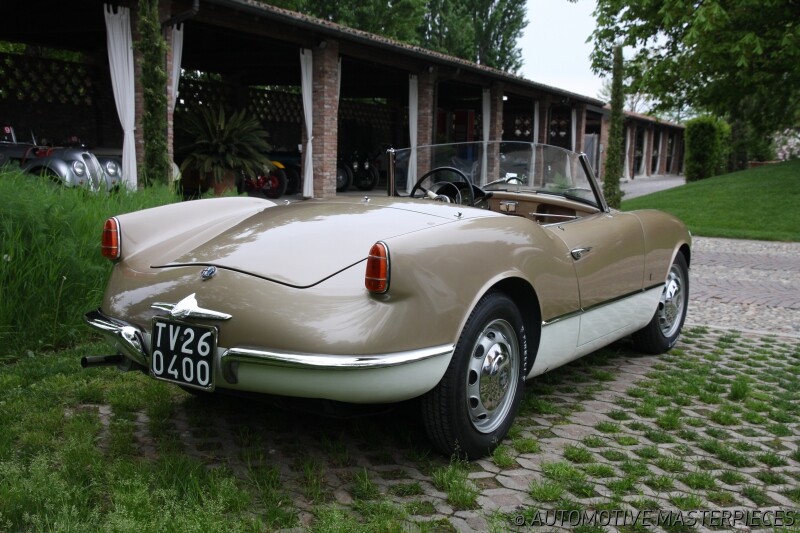 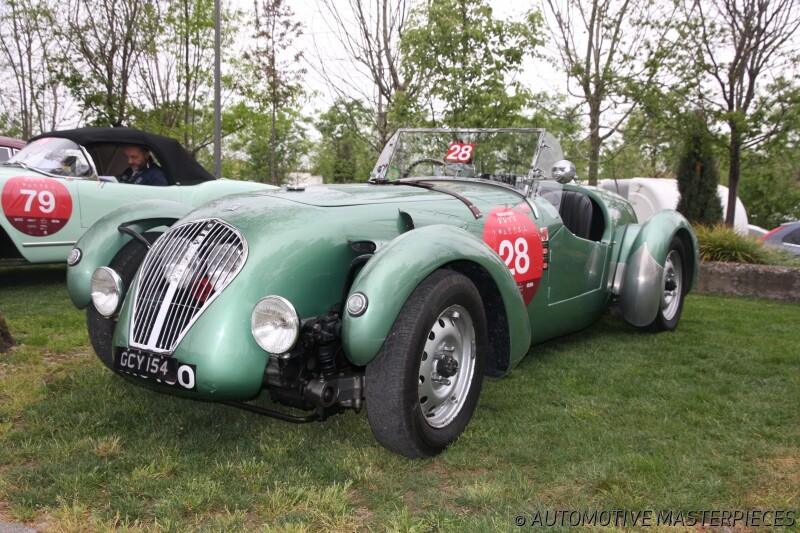 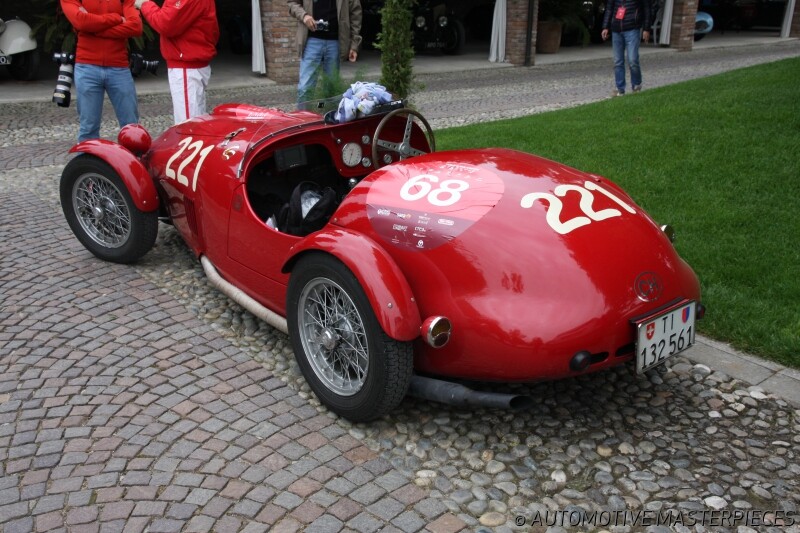 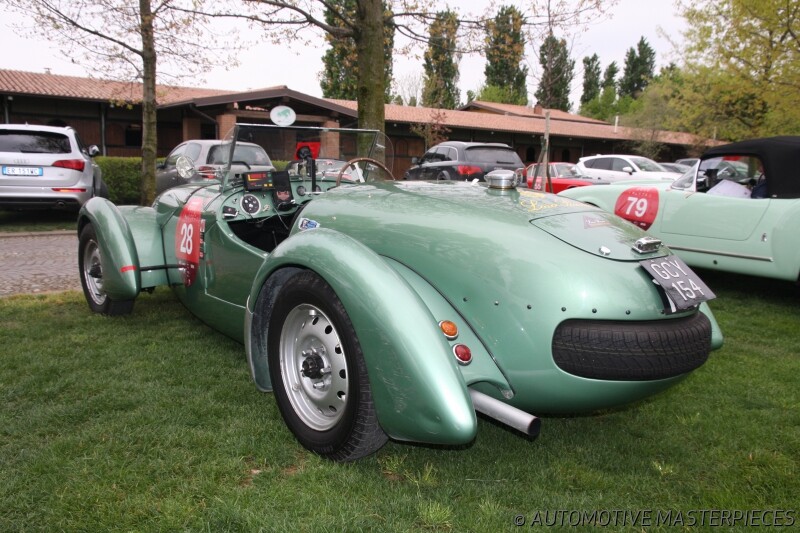 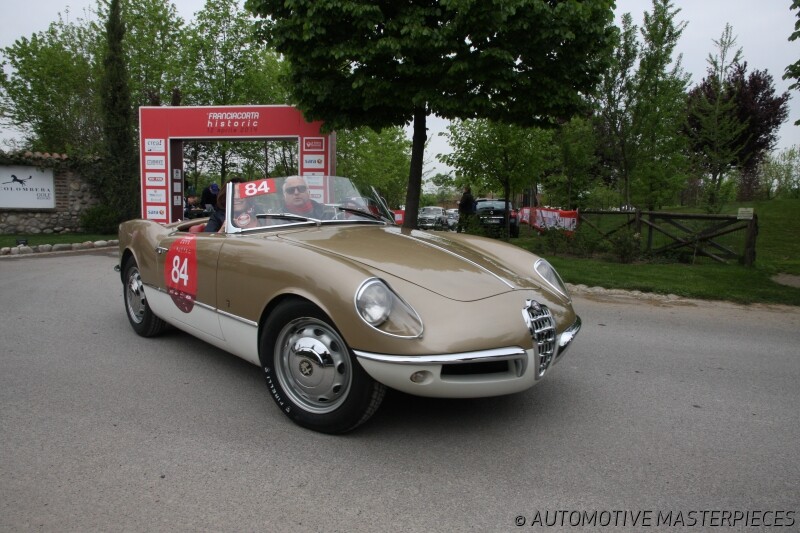 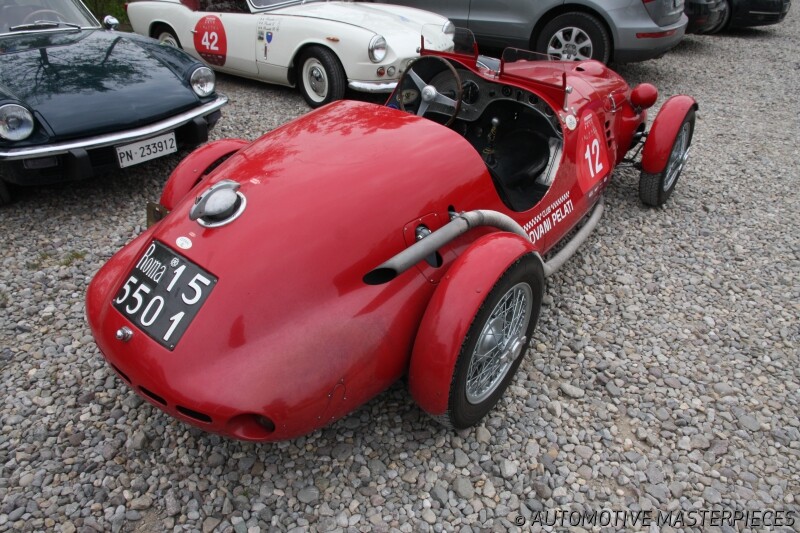 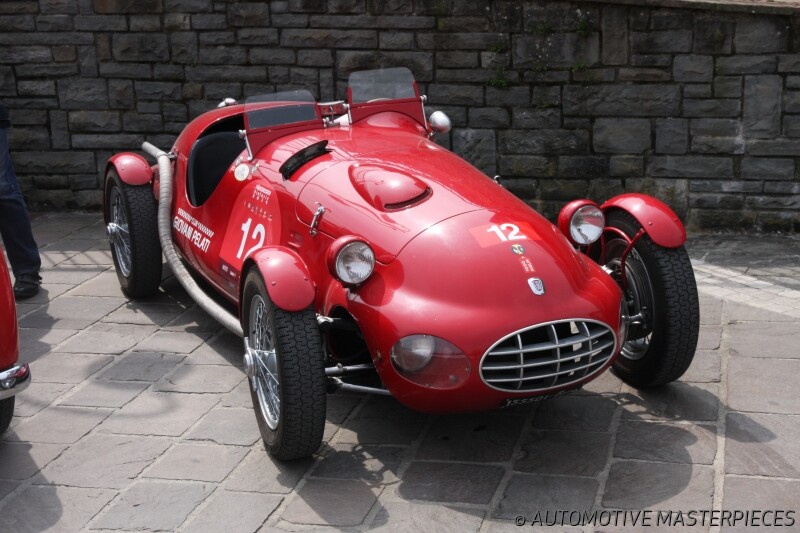 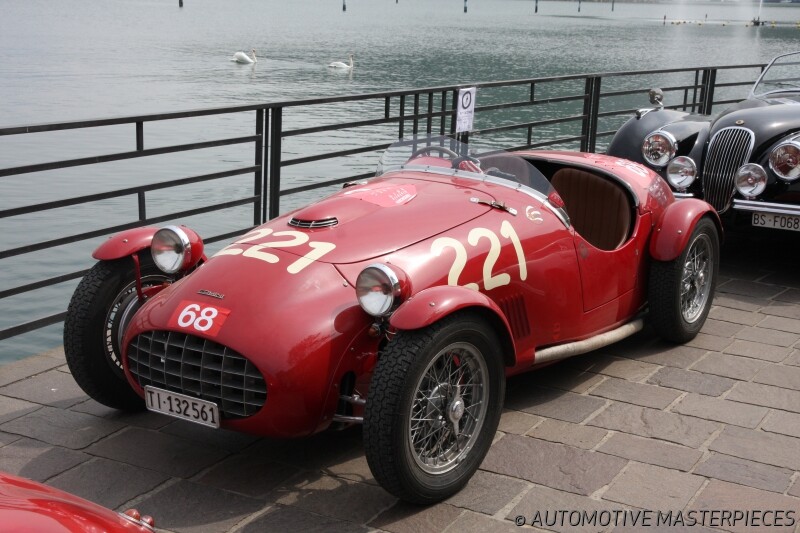 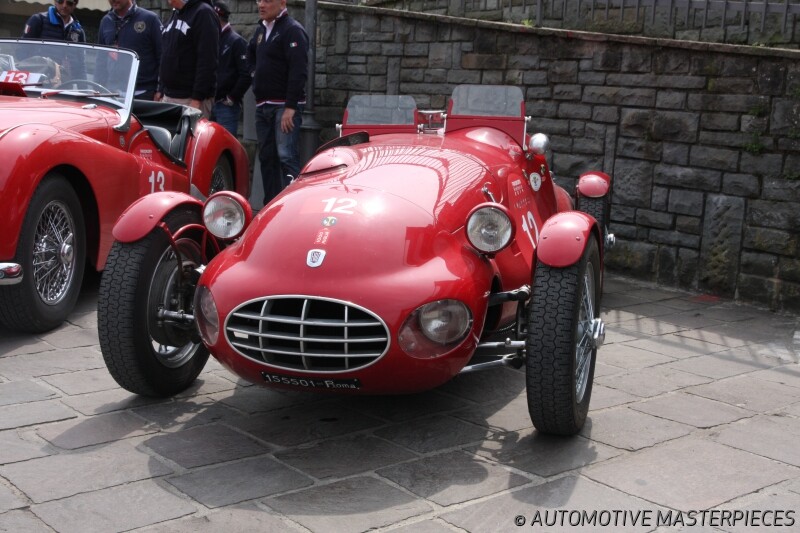